But what about the time constant or rise time?

According the differential equations governing the first and second order dynamic systems, the paramater time constant is independent of the input signal, so I would say this also remains the same, but according to the other definition of the time constant which states that time-consnat is a measure of how fast a system goes from one steady state to another, then I would say no, and here is why:

If we feed a system with delayed input or a system has an intrinsic delay or dead-time (Dead time is the delay from when a controller output (CO) signal is issued until when the measured process variable (PV) first begins to respond.), then the time in which system changes its state between the regiems would prolong with the dead-time.

To clarify the concepts, I consider a RC circuit with a step input function, in this case a 1.5 volt battery, here you can find the circuit:

The $R_i$ resistor represents the losses in the capacitor.The differential equation governs this circuit:

With $\tau$, I mean time constant and with K the so called gain. $u$ is the input signal and $y$ is the output.

I have all the the out put voltages and inputs all together in an excel file, they collected all the data via NiDAQ, and I want to measure the parameters $K$ and $\tau$.

Here is the graphs, the orange curve is the input, or in this case the battery voltage and the blue curve is the output voltage over the capacitor: 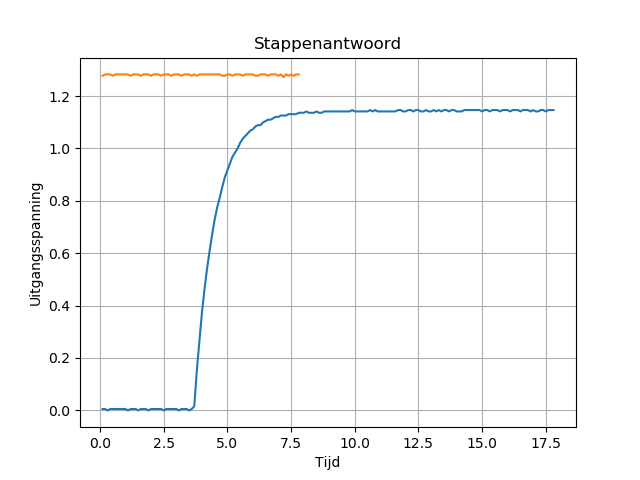 This circuit or system has no intrinsic dead time, I don't know where this delay is coming from.

Browse other questions tagged linear-systems time-domain differential-equation or ask your own question.

0
Is the following system LTI (finite speed of signal propagation)?
1
Output of discrete-time LTI system guaranteed to be same form as input?
0
Impulse response (general form for linear systems as two-variables function $h(t,\tau)$) applied to Time-invariant systems
0
Causality as applied to capacitors
2
Eigenfunction property for LTI sinusoidal and the sinusoidal steady-state response
3
Design a LTI system which returns DC value of the input signal
1
Stability of a system in time-domain
0
time linearity of LTI system
0
RC high pass filter differential equation
2
Why aren't the integrator and the differentiator inverse systems?