I am having trouble understanding the impulse response function. I have a beam of 10 m long. I place 2 sensors, one at point A and one at point B. I then excite the beam at point E (shown in picture) by tapping it with a hammer. I then repeat this on several different beams of different lengths, dimensions, materials and more. I want to tap the beam to see how the beam responds, using accelerometers at locations a and b, and see if I can estimate things about the beam (example material). 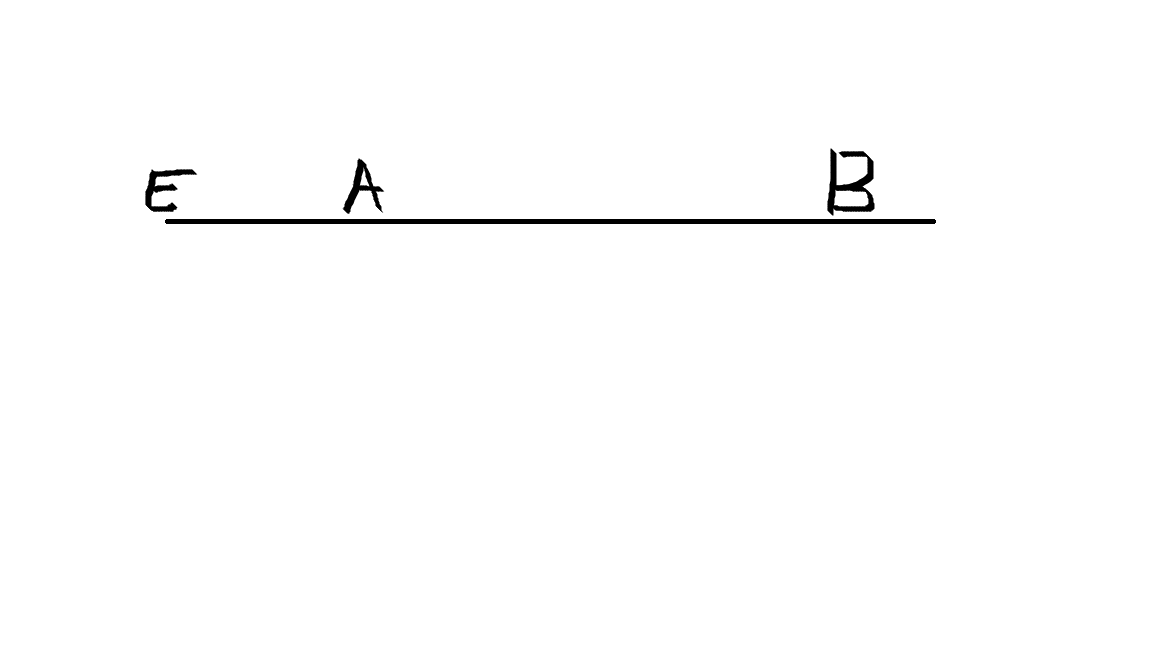 Also, what does the impulse response actually tell me? How is this useful?

Firstly, for a response to be classified as the response to an impulse. The input first must qualify as an impulse to the system. For ex: a quick clap could be the impulse input to measure the sound impulse response of the room.

In your case, hitting the hammer at point E must be a "good enough" impulse input for all the materials and lengths.

So the essential question here is to first classify what qualifies as an impulse for rope at E and the suseuqent uniformity of excitation across the length.

If the excitation at E is not uniform at A and B then you would have to define two effective impulses for your rope system. One for the response at A and other at B.

Once you know the impulse response. Then any input can be written as sum of weighted impulses and if the system is linear and time invariant then the output is simply the sum of delayed responses as below for a discrete time signal

Let the impulse response to this $\delta(n)$ input be $h(n)$ then the output is simply,

This is possible both because the system is linear as well as time invariant, so if the impulse response $\delta(n)$ is $ h(n)$ then the response for $\delta(n-k)$ is $h(n-k)$

This is an example of a single input multiple output (SIMO) system. You input a single "signal", which is the hammer hitting the beam, and the sensors at A and B output two signals. I'm assuming that hitting the beam with a hammer is sufficiently close to an impulse for this to work out, but in practice you could always put a sensor directly near where you hit the hammer to quantify how close this actually is to a true impulse. 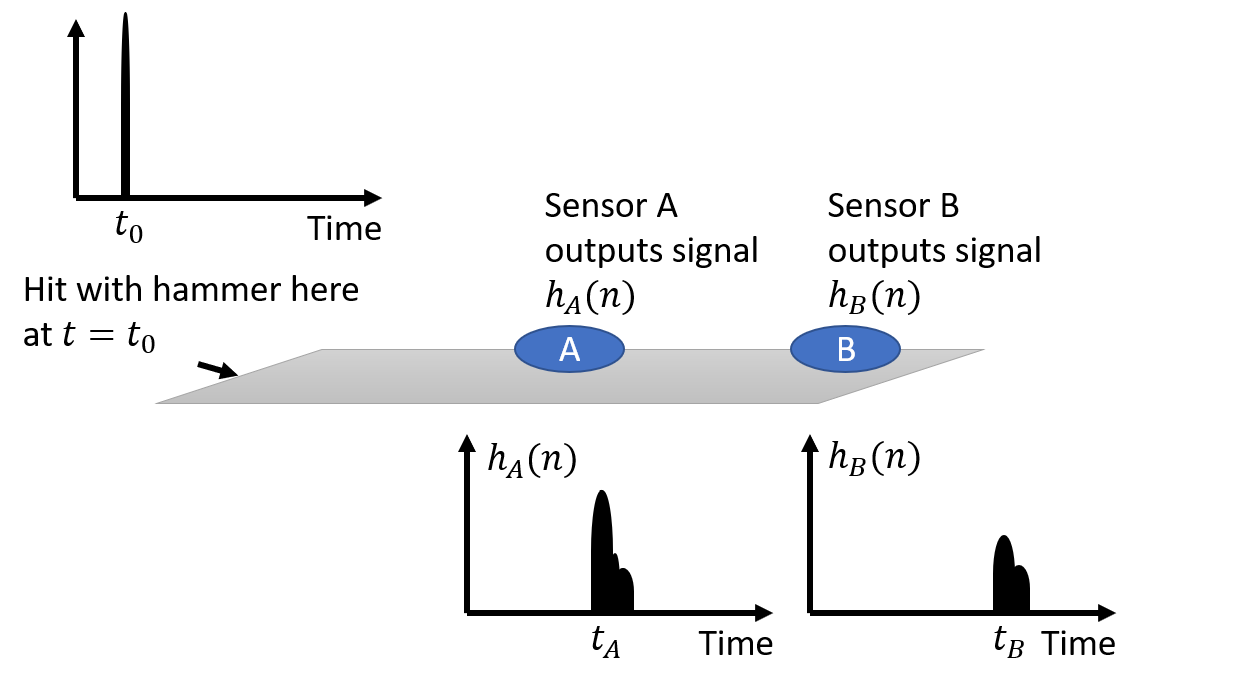 I'm not a materials engineer but I don't think that the outputs would simply be the impulse but shifted in time, maybe there is some smearing of the impulse over time. I am guessing that you could use different features of the impulse responses like the timing offsets tell you something about how quickly the energy travels through the beam, amplitude differences between $h_A(n)$ and $h_B(n)$ tells you how quickly the energy decays with distance, and perhaps these things could be used to calculate material density or other attributes.

The impulse response tells you the response of the system to an impulse, that is all. If the system in linear time-invariant (LTI) then the impulse response becomes more meaningful and can be used to find the output due to any input by using convolution. In your case, you'd have to reason if the beam is linear and time-invariant. I imagine for any reasonable amount of time and stable temperatures, a beam is probably time invariant. You could imagine that heating or cooling a steel beam might change the responses, in which case the system is time variant. Again, I am not a materials engineer, but if I had to guess I think a beam could be reasonably be considered LTI under the right assumptions (not a beam close to a rocket engine where there would be incredible heating over time).

The reason for this is because it is very difficult to get enough energy to the the closest thing to an implementation of an impulse in time; such as a hammer in the examples. The impulse in time is a uniform response over all frequencies in the frequency domain but in this case it is much more effective instead to sweep the input with a sine wave to cover all frequencies and measure the resulting sine wave at the output for it's magnitude and phase when comparing input to output. The sweep rate needs to be much slower than the integration time to make the measurement, but you can perhaps better picture this as stepping from one frequency to the next and for each measure the magnitude and phase between the output and input sine-waves to derive each sample of the frequency response. This can be done with much higher signal to noise at each frequency and therefore typically can establish a much better estimate of what the actual impulse response is.

Once you have the impulse response, assuming this is a linear system, you can predict the output for any other input using convolution, since an arbitrary waveform can be viewed as a series of weighted impulses.

If you have no way to measure the input in the same way you are measuring the output, then you can compare B to A using the swept sine approach and from that establish the impulse response for the system between those points (this would give you the same result as if the source was at point A). You could use alternate waveforms other than swept sine but what will be important is that they have energy spread evenly at the input to the system over the frequency range of interest (which in this case would be all frequencies until the output is sufficiently attenuated). So this could be done with psuedo-random noise sources as well, since they spread energy equally over the frequency band but also allow you to apply a lot more power than a single impulse.

How determine the delay in my signal practically

If I'm correct, the idea of impulse testing is to apply a mechanical signal to the system that contains a wideband of frequencies and determine at which of those frequencies the system prefers to oscillate (its "resonant" frequency). Such an input signal is an "impulse-like" signal whose spectrum is wideband. So (1)you hit your beam at point E and record point A's time-domain acceleration signal. (2)Integrate that acceleration signal to determine point A's time-domain velocity signal. (3)Integrate that velocity signal to determine point A's time-domain position signal. (4)Compute the discrete Fourier transform (using the FFT) of the position signal. (5)Examine the spectral data to see at what frequency the spectral magnitude is the largest. That frequency is the resonant frequency at point A of your mechanical system (your beam).