Types of interpolation used for reconstruction in DSP?

There are other types of interpolation besides above?

What are those types? (That types give a much better/smoother reconstructed signal as compared to two types i discussed above)

For those other types of interpolation, what/how are the appearances/looks of reconstructed output waves ? (Please kindly try to include those wave graphs in your answer)

By reconstruction, i mean conversion of digital into analog signal

Zero-order hold will result in a piecewise-constant waveform. 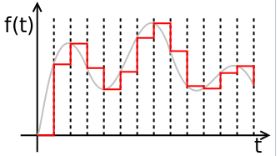 Linear interpolation will result in a piecewise-linear waveform. 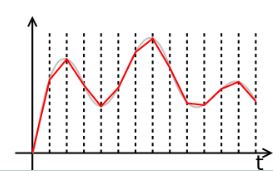 If you want a piecewise-quadratic or piecewise-cubic or higher order polynomial interpolation, it will not appear much different from the original bandlimited waveform.

As Robert said, there are other interpolations that get very close to the original bandlimited waveform. The ideal is the Whittaker-Shannon interpolation formula, or sinc interpolation. This is equivalent to convolution of the signal data with a sinc function, the impulse response of an ideal lowpass filter, at half the sample rate.

But the sinc function is infinite, so we truncate the response on both sides of the central lobe, and window it to fade the abrupt discontinuity and improve behavior. The result is also a lowpass filter, also linear phase, but with a more gradual cutoff slope (transition band), and an imperfect stop band. As such, we move the cutoff frequency down below half the sample rate in order to get sufficient attenuation for antialiasing.

A Kaiser window is a good choice for the window. It’s easy to calculate, and easy to adjust for stop band attenuation.

Your choices will be the sinc frequency (filter corner frequency), its length (how many points to take into account in the interpolation, which will determine the filter’s steepness, or transition-band width), and the window (determining tradeoff of transition-band width and stop-band attenuation).

Here’s a graph of a truncated sinc function and a Kaiser window, with the resulting product, the windowed-sinc function (in this case the function has been scaled for use as an upsampling filter, which also keeps it from obscuring the sinc function).

Here's the frequency response of such a filter, in this case being used for 2x sample rate conversion, with the filter cutoff at half the original sample rate, showing the gradual transition and limited stop-band attenuation resulting from the finite impulse response of the windowed sinc:

You can find a windowed sinc calculator here: https://www.earlevel.com/main/2010/12/05/building-a-windowed-sinc-filter/

Also, because the sinc function is smooth, you can pre-compute an oversampled windowed-sinc table and interpolate linearly between its points for an efficient way to calculate an arbitrary point between samples—because an oversampled sinc, like a heavily sampled sine wave, it relatively smooth, linear interpolation between points can have low error.

To answer the question of what the waveform would look like, it would look like the bandlimited input waveform that you sampled. The longer the sinc, the closer to the original. Since shorter impulses repsonses will give less perfect and steep lowpass filtering, so they will deviate slightly from the original, but the interpolation will be formed from the sinc curves, they will not be formed with the straight lines of zero order hold and linear interpolation.

Not the answer you're looking for? Browse other questions tagged sampling interpolation reconstruction wave digital-to-analog or ask your own question.

6
Nyquist Frequency Phase Shift
6
Artifact in Bicubic interpolation
9
Signal values we will 'miss' between sampling instances during sampling of band limited signals
9
When is cubic spline interpolation better than an interpolating polynomial?
4
Nonnegative or positive band-limited interpolation
0
Not sure how to perform ZOH upsampling
9
reconstruction filter - How does it actually work?
0
Complex signal sine reconstruction
0
D/A converter with
0
Difficulty absorbing Idea of interpolation?