I tried the change of variable in integral, but couldn't find out the answer.

This question appears to involve confusion about the relationship between convolution and cross-correlation. To illustrate the relationship, consider the two rectangular pulses shown below:

The convolution integral was given by

so $\mathrm {x_2(\lambda)}$ was reflected around the ordinate and is the function that gets shifted. This is clearly shown in the figure in my linked answer.

This is illustrated the following figure that I drew in the same fashion as the figure in my linked answer: 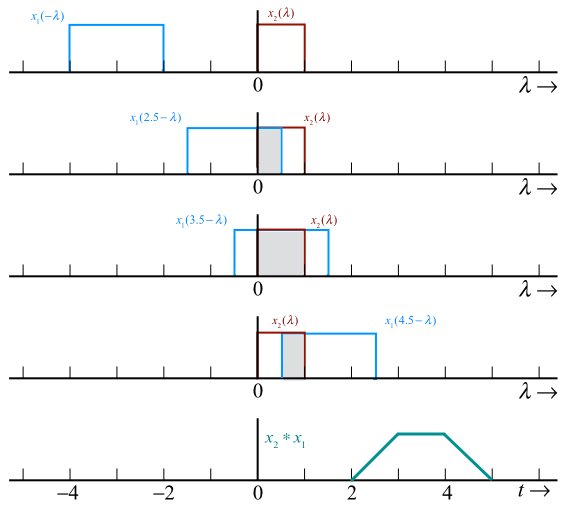 Thus $\mathrm {x_1*x_2 = x_2*x_1}$, i.e., it does not matter which function is reversed for the convolution. Of course, if a function is symmetric about its center, then reversing becomes rather trivial. In this example, both rectangular pulses are symmetric about their centers, so the situation is especially simple.

In corroboration of the above, the following (through their equation 1.5-3) is directly quoted from Blinchikoff and Zverev [2, p. 12]:

Let p(t) and q(t) each be a piecewise continuous function for $-\infty < t < \infty$. The convolution of p and q, denoted by $p*q$, is defined to be the third function

Therefore, in answer to the OP's second question, it does not matter mathematically if f(t) or g(t) is the reversed function, but the calculation may be simplified, in practice, if either function is symmetric about its center.

For cross-correlation, all that is necessary is to shift one function by $\tau$, as per this photo image from [2, p. 305]: 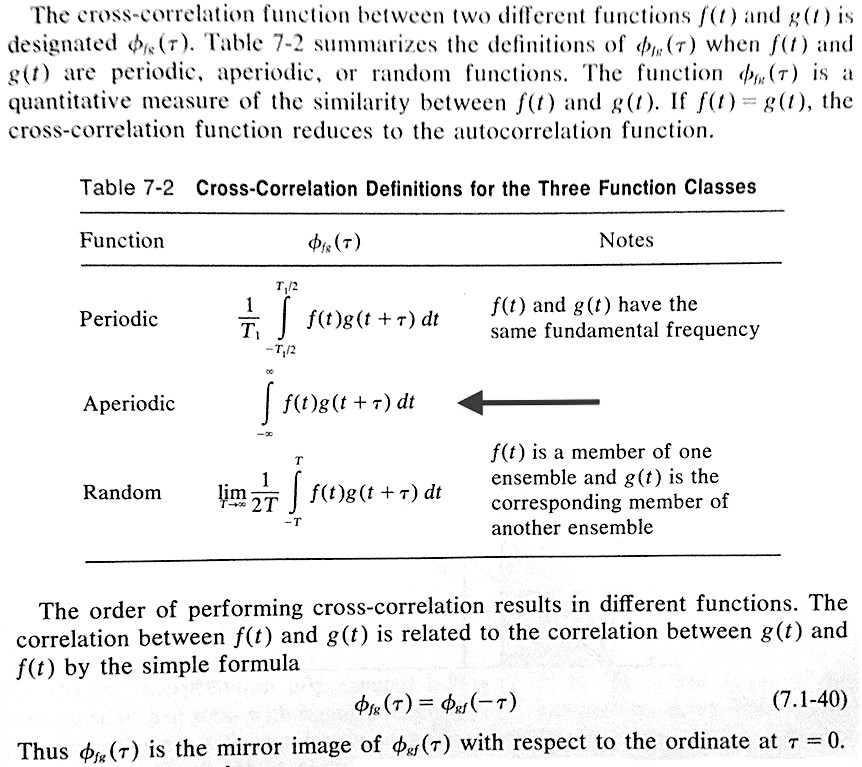 So cross-correlation calculations are quite similar to convolution calculations, but note the important considerations discussed directly below Blinchikoff and Zverev's Table 7-2. I suggest that the OP think about their first question, i.e., what happens when both f(t) and g(t) are reversed and the overlap integrals are calculated.

then it becomes clear that flipping both functions does not create the same result as before but actually does flip the result in consequence.

Not the answer you're looking for? Browse other questions tagged convolution continuous-signals or ask your own question.

0
How to derive the answer to this convolution problem?
0
convolution of a real and complex signal
1
Unit step function present in convolution result
0
Basic Confusion About the DFT and Convolution
0
Convolution of Two Impulse Signals
1
Confusion in AC and DC signals
0
How to convolve $u(-t)$ with other signals?
0
DTFT of window function applied to input signal
0
Time-shifting operation post the time-reversal operation when performing convolution