How to determine the step response given a transfer function?

I'm new to Signal Processing. I would like to know how to draw the step response given a transfer function.

I've been also given the Bode diagrams (I don't know if it helps): 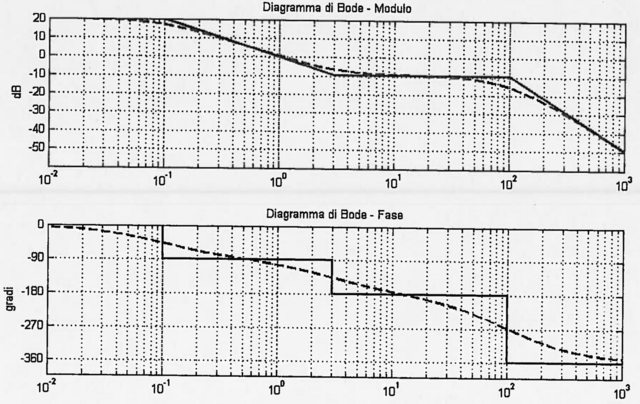 I think $G(s)$ is a transfer function of the third order, so do the second-order laws also apply there, where the settling time is calculated as $t_{s}=\frac{4}{\zeta \omega_{n}}$?

The short answer is that the step response is the inverse Laplace Transform of $\frac{1}{s}G(s)$.

Here are some hints that should help in being able to solve the problem. Since it is likely a homework problem I wanted to provide more details as relevant background and steps toward a solution rather than detail the mathematics for the specific solution. A plot of the resulting step response is included at the end to validate the solution.

First, a review of the simple case of real negative poles on the s-plane along with their inverse (unilateral) Laplace Transform. 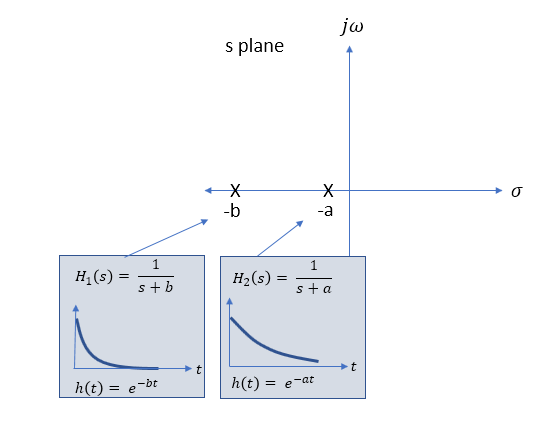 As shown, a pole given by the transfer function $H(s) = \frac{1}{s+\alpha}$ has an inverse Laplace transform $x(t) = e^{-\alpha t}$ for $t\ge 0$. This is easy to prove but is also well tabulated in all tables of the Laplace Transforms such as at the bottom of this page: https://en.wikipedia.org/wiki/Laplace_transform

Specifically if $H(s)$ describes the transfer function of the system (output divided by input when the units are $s$), $h(t)$ is the impulse response of the system. As an aside demonstrating one utility of the Laplace Transform, if we restrict $s$ to just be the imaginary axis, we get the frequency response $H(j\omega)$ which in this case would be a low pass filter. Whether $s$ is real or imaginary, we typically refer to the s-domain as the "frequency domain" and all points on the surface are given as pole locations by the transforms of $e^{st}$. So with $h(t)$ being the impulse response, what we see as graphed is the response in time at the output if an impulse was presented at the input. Notice that the pole closest to the imaginary axis takes the longest to decay in its impulse response. This is a key take-away and is the reason we call the negative poles closest to the axis "dominant poles". Like an unwanted guest, they take way too long to go away. Poles further away from the imaginary axis decay much more rapidly in time.

Now consider the summation of these two transfer functions:

A summation of two systems in the frequency domain is a parallel process in their signal flow implementation as depicted in the figure below. In contrast the function $H_1(s)H_2(s)$ would be implemented as the cascade of the two systems in series. 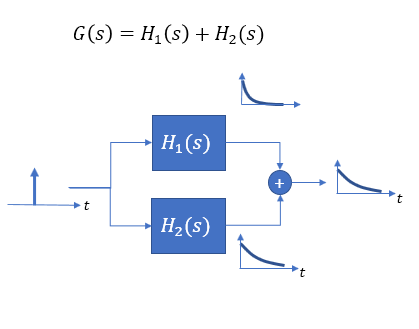 Now for the system above represented by the summation of our two systems, the total output due to an impulse at the input would be the sum of the impulse response from each system. Here we see how the pole that was further away from the imaginary axis quickly decays so does not significantly contribute to the final settling time of the output. This settling time (and the overall shape of the response if the poles are far enough apart) is dominated by the pole closest to the imaginary axis, our dominant pole.

Further this combined system is given as:

Notice how adding them together introduced a zero (at $z_1=-(a+b)/2$) but did not change the pole locations. Importantly this shows how given the general combined expression on the right side of the above equation, the process of Partial Fraction Expansions can be used to put this in the form of the parallel (summed) system as described by the left side of the above equation. This is then very easy to solve for the inverse transform, providing the impulse response, here given as:

Solving this again is aided by Partial Fraction Expansion:

From which we can easily derive the inverse Laplace Transform providing the step response $s(t)$:

To easily see how the consideration of the dominant pole still applies, consider that a step at the input to the system is an infinite series of impulses each at time $t$ (and to be accurate each is weighted by $dt$ but that is just a scaling). Each impulse produces it's related impulse response, with the responses from llater impulses (accumulating) with the tails of the responses from previous impulses. The accumulation of the weighted impulse responses is described mathematically as convolution but results in the step response at the output. Therefore the dominant pole would also dominate the resulting step response. 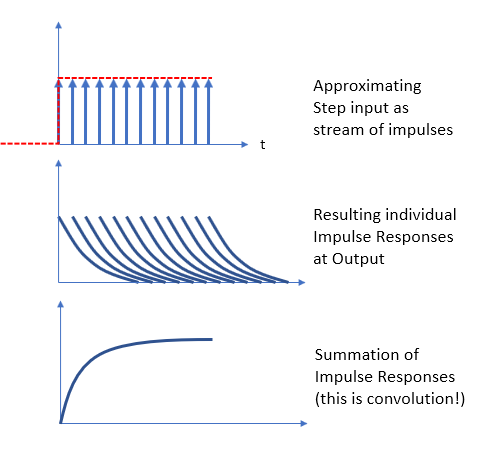 With that background in mind, here are the main points specific to solving the OP's problem:

The step response can reasonably estimated from the dominant pole alone.

For an accurate and complete solution, use Partial Fraction Expansion to factor decompose $G(s)$ into three parallel systems $G_1(s)$, $G_2(s)$, $G_3(s)$, which can then each be easily solved for their inverse Laplace Transforms (this would provide the impulse response of $G(s)$.

It can be confirmed how closely $G_1(s)$ follows the step response for the system with only the dominant pole given by $1/(s+0.1)$. Also notice the significant difference in time and amplitude scales between the three plots. $G_1(s)$ takes over 50 seconds to settle while $G_2(s)$ and $G_3(s)$ are nearly settled at 50 milliseconds. The sum of all three of these will closely match $G_1(s)$ alone. Further the final values for $G_2(s)$ and $G_3(s)$ are significantly smaller than the final value for $G_1(s)$, but the sum of all three final values will match the final value for combined system $G(s)$. 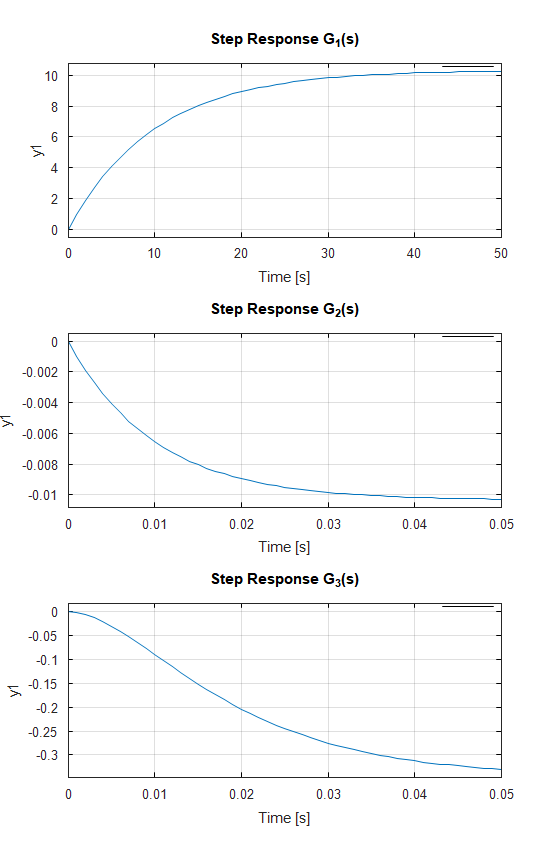 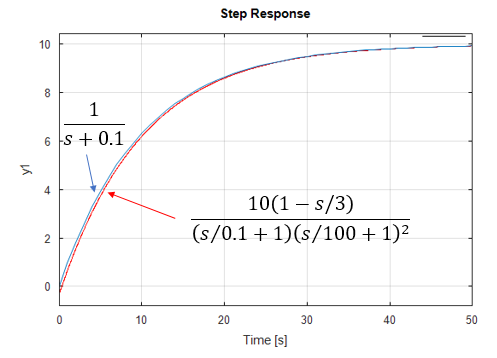 The more significant difference between the two is in the very beginning, so zooming in to show that detail: 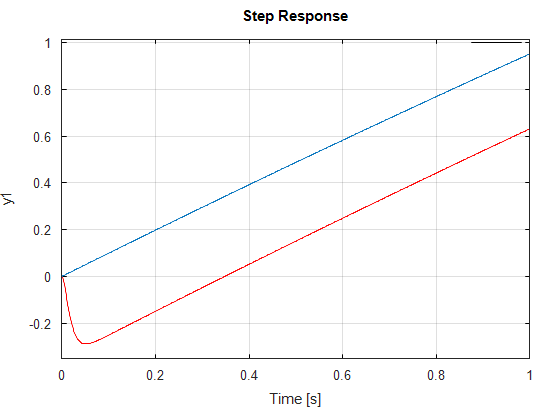 The MATLAB/Octave with the control toolbox to plot the step response for $G(s)$ is:

Not the answer you're looking for? Browse other questions tagged step-response or ask your own question.