Perhaps someone can help me resolve something - this is my understanding:

In deterministic signal analysis, for a continuous signal $x(t)$ the signal energy is defined by $$E_{\textrm{s}} = \int^{+\infty}_{-\infty} |x(t)|^2\mathrm dt \hspace{1cm} \textrm{Units:}\hspace{0.3cm}[\textrm{signal}^2\cdot \textrm{time}]$$ where the subscript $s$ is to indicate explicitly that we are talking about "signal energy", and not real physical energy (which would be in units of Joules if you were to divide signal energy by some load impedance).

This makes sense because it is the same unit as the rate of signal energy transferred, which is signal power.

Therefore, the units of power spectral density should be [signal power per frequency band], or $[\textrm{signal}^2 / \textrm{Hz}]$.

See these answers for some examples:

The power spectral density is more nicely defined as follows. We define the windowed signal

The windowed Fourier transform is then

The power spectral density is then defined by

More properly when dealing with random signals one might take an expectation value of the squared windowed transform.

This can be expressed another way. We can define a window function

Here $\theta$ is the Heaviside function. And a windowed version of $x(t)$ given by

Note that this is the exact same as the windowed function defined above but with a factor of $\frac{1}{\sqrt{\Delta t}}$ built in. The Power spectral density can then be defined equivalently as

@Dan Boschen expresses some confusion about reconciling the dimensions of $S_{xx}(f)$ with the Fourier transform of the autocorrelation function. There is no need for confusion. The units agree.

The expression on the right has dimensions of $[\text{signal}^2\cdot \text{time}]$ which is the same as the units of power spectral density expressed above. This should hint that the Fourier transform of the auto-correlation function is NOT given by $|X(f)|^2$...

THIS IS NOT YET A COMPLETE ANSWER BUT THE CONTINUATION OF THE OP's QUESTION IN MY ATTEMPT TO ANSWER and like the OP, I would welcome a short concise bottom line answer that addresses this.

Update: After the OP pushed me through the mud on this I ended up siding with his same level of questioning and concluding that in a strict sense $|X(f)|^2$ is en energy spectral density as given by its units. When $x(t)$ is a "power signal" meaning it has infinite energy (such as a sine wave for all time), the second reference linked below states that in this case the PSD is actually the limit of the ESD as in

What I still can't resolve is the formal definition of PSD as the Fourier Transform of the autocorrelation function given that I clearly see from this how the PSD is $|X(f)|^2$, but then has the conflict with units as the OP has stated, further detailed below.

Leaving my notes and references below but the clear answer is still elusive.

This was also a useful reference:

Consider first that for continuous signals over all time (infinite energy), the "Power Spectral Density" is given as the Fourier Transform of the Autocorrelation function:

From which we see that:

As for units- Generally, units under integration follow the property such that for

Consider one layer down from PSD in how the Fourier Transform of a voltage actually has units of inverse frequency (as in volts/Hz):

Now consider the units of the autocorrelation function:

If $x$ was in units of volts, we see that the autocorrelation function has units of $v^2 \cdot \sec$ ... which is units of energy!

I am curious about the same issue the OP raised: sometimes the units of power spectral density seem not quite right. I assume it is just me, so I always go back to my touchstone reference 1. Blinchikoff and Zverev use the definitions of Fourier transform and inverse transforms I have always used and preferred [1, p. 294]:

and they give the units of the autocorrelation function and its Fourier transform [1, p. 304]: 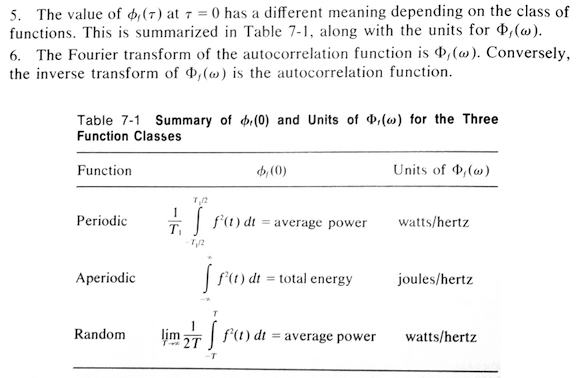 Since Dan Boschen has not yet got this one nailed to the wall, I started looking at books on my shelves. McGillem and Cooper 2 say this: 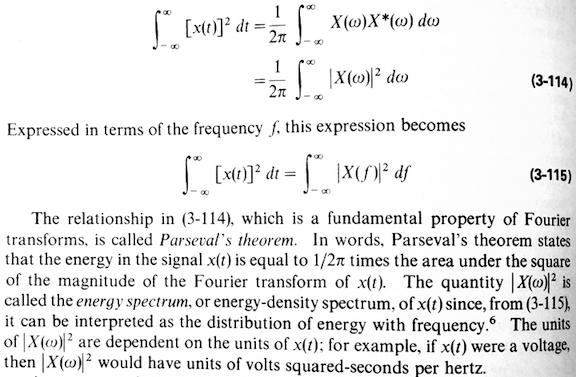 Bracewell, in his classic book 3, discusses this issue on pages 46-47:

I could check more books, but there seems to be no point.

Bottom line: The OP is correct about the units issue and my guess is that the issue arises if care is not taken to distinguish among the three types of functions given in the table by Blinchikoff and Zverev.

This is not really an answer, but a different angle:

Physically speaking, the power of a single signal is not well defined. Physical power (or intensity) is always the product of two root-power quantities (which used to be called filed quantities). Voltage times current, force times velocity, etc.

is just wrong. That would imply that x(t) has units of $\sqrt{W}$ which doesn't exist since it would require roots of SI base units.

You can certainly define a formula this way, but it's not physical energy. Sometimes there is just a proportionality factor missing, but often it's way more sophisticated than that.

One could easily interpolate the DTFT, assuming a sampling time to get the PSD in continuous time.

Essentially, the characterization of the spectrum power is easily seen by the DTFT although in the unitless frequency domain.

Not the answer you're looking for? Browse other questions tagged fourier-transform continuous-signals power-spectral-density signal-power signal-energy or ask your own question.