I'm trying to set-up a machine vision application in which I have to detect the position of a printing nozzle (in the red sqaure in the image) in a field of view in order to prcisely position a ganty stage.

I currently struggle to detect the wished features. I have tried to implement a Haar cascade using opencv but the detection is not performing. 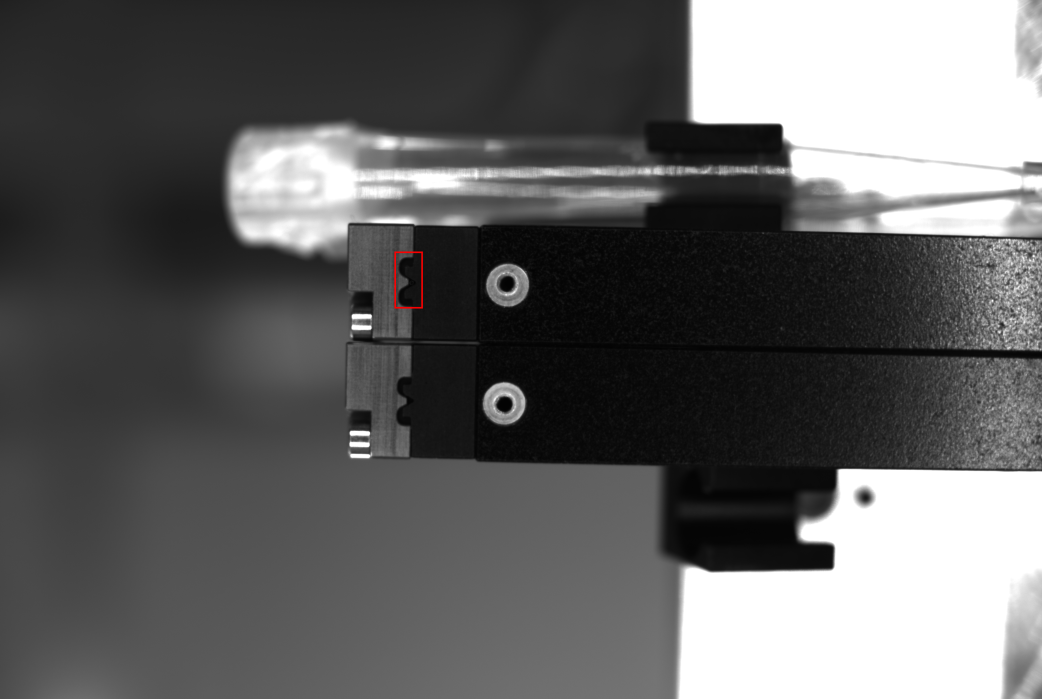 To train my classifier I used the full image with the location of the nozzles blacked out as negative and the cutout of the red rectangle as positives. I have few positives and negatives (15 of each) that are basically the same image with different illuminations/expositions and placements of the printer head in the field of view.

Since this approach did not work, what kind of image recognition should I use in that case? Would a training of a custom set in tensorFlow give better results? I've seen implementations of DNN using existing vast libraries of tagged images but I'm not sure how if this is the best method for this application.

If the camera has a shallow depth of focus and the background is mostly blurry and the foreground is only moving at one focal plane, why not use a simpler method, such as Template Matching?

Since the printing head is changing its angle of view with respect to the lens as it moves in the $x,y$ dimensions, you might have to use more than one templates but overall the process is straightforward: Apply the cross correlation in a sliding window across the image and stop where the cross correlation peaks.

This example is in MATLAB but easily transferable to other platforms.

This sliding window might seem slow but is unavoidable. Neural networks do it implicitly at the lowest level of inputs. The good news here is that the printing head image does not move in the $z$ dimension, in which case the scale would change too. This would mean that you would have to repeat this process for the scales of interest.

You might be able to derive "hints" of where the printing head is roughly in the image, by tracking its silhouette. If you threshold the image for example, you might want to look for a distinct pattern of large rectangular areas in black, that roughly match the size and shape of the arm. This would help in making the search area where the normalised cross correlation is applied, smaller. But overall, I would not expect a modern Desktop or even SBC to struggle with an HD image and a patch even as big as 128x128 pixels.