What is meant by "Group delay"?in simple words?

Here is my simplest explanation:

The group delay, as the negative derivative of phase, predicts the time delay of the amplitude envelope of a pulse, as shown in the hand-drawn graphic below. The upper part of the sketch shows a sinusoidal waveform varied in amplitude by its envelope. The lower one is showing this same envelope before and after a system that has group delay.

This applies when the phase of the frequency response can be approximated as linear for the "group" of frequencies within the pulse envelope. Thus for non-linear phase systems, this applies to generally narrower band signals such as the pulse I show where the amplitude transition is gradual. 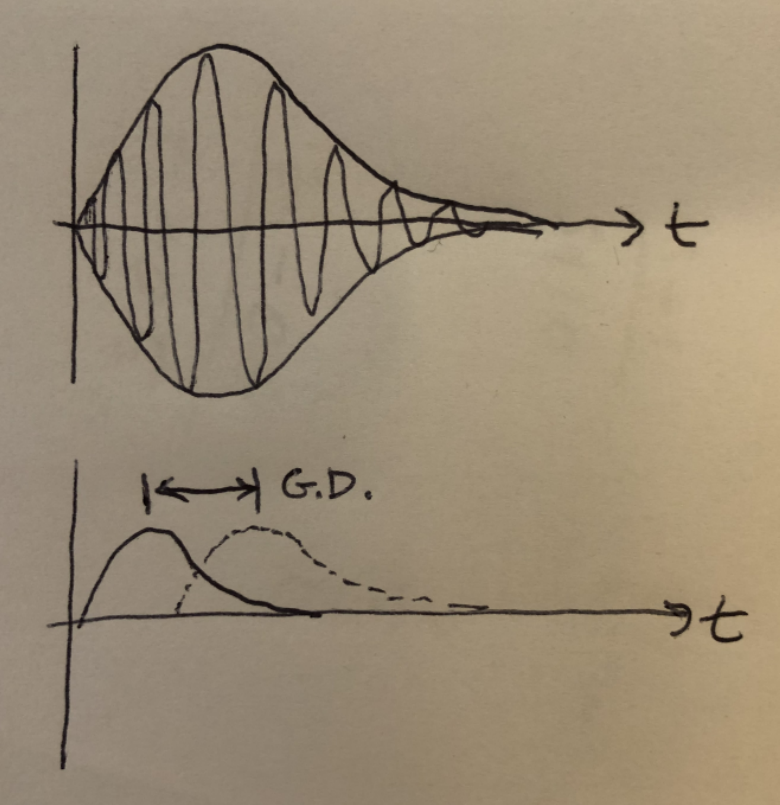 These posts and answers are helpful:

Calculate the time delay introduced by group delay for IIR-Filters

And most helpful to what otherwise seems like a paradox of causality for positive group delay is this paper https://www.researchgate.net/publication/253463703_Causality_and_Negative_Group_Delays_in_a_Simple_Bandpass_Amplifier referenced by Max in this post Physical Meaning of Negative Group Delay for causal LTI systems which I bottom line as causality is not violated but due to the bandwidth restrictions above we create a condition that causes the pulse envelope at the output to precede the input: The output pulse does not appear until the input amplitude varies (and if we have gain in the system the output envelope grows faster) and due to the bandwidth constraint and the result of destructive summation of the input pulse the output will start to decrease before the input does. Very cool DSP magic trick. See this post that illustrates this with a specific example.

To understand group delay, it is important to first understand phase delay.

Phase delay is the amount of phase lag for certain frequency. The units are in degrees. But there is a weird relationship between phase delay (units = degrees) and time delay (units = seconds). Let me explain:

What this says is that constant phase delay does not equal constant time delay! Deriving the time delay from phase delay is dependent on the frequency itself. The only way for all frequencies to get delayed by the same time delay is if the phase response is linear.

Let's look at this visually.

If we feed an input signal into a filter with a constant group delay, all frequencies will be time delayed the same amount. Referring to the picture below, the outputted signal matches the input signal except it is slightly delayed. 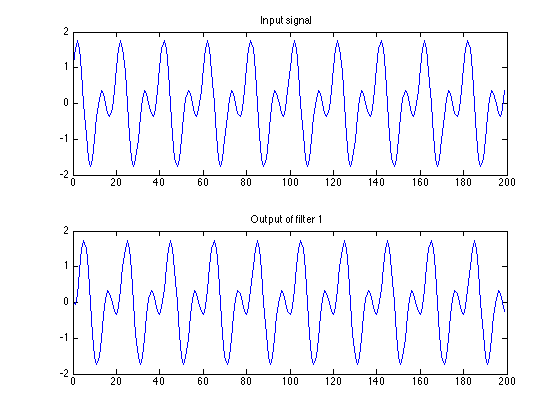 If instead we fed that input signal into a filter with a non-constant group delay. The frequencies will time delay different amounts resulting in an output signal that looks nothing like the inputted signal. 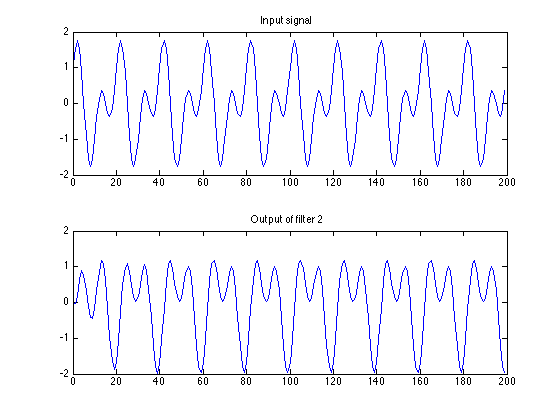 So even though each filter is low-pass, one filter distorts the signal such that it doesn't resemble the inputted signal. This is why linear-phase (constant group delay) filters are desirable in some applications.

In linear time-invariant (LTI) system theory, control theory, and in digital or analog signal processing, the relationship between the input signal, $x(t)$, to output signal, $y(t)$, of an LTI system is governed by a convolution operation:

Or, in the frequency domain,

Suppose that such a system is driven by a quasi-sinusoidal signal, that is a sinusoid having an amplitude envelope $a(t)>0$ that is slowly changing relative to the frequency $\omega$ of the sinusoid. Mathematically, this means that the quasi-sinusoidal driving signal has the form

and the slowly changing amplitude envelope $a(t)$ means that

Here $\tau_g$ and $\tau_\phi$, the group delay and phase delay respectively, are given by the expressions below (and potentially are functions of the angular frequency $ \omega$). The sinusoid, as indicated by the zero crossings, is delayed in time by phase delay, $\tau_\phi$. The envelope of the sinusoid is delayed in time by the group delay, $\tau_g$.

In a linear phas system (with non-inverting gain), both $\tau_g$ and $\tau_\phi$ are constant (i.e. independent of $\omega$) and equal, and their common value equals the overall delay of the system; and the unwrapped phase shift of the system (namely $-\omega \tau_\phi$) is negative, with magnitude increasing linearly with frequency $\omega$.

More generally, it can be shown that for an LTI system with transfer function $H(s)$ driven by a complex sinusoid of unit amplitude,

where the phase shift $\phi$ is

Additionally, it can be shown that the group delay, $\tau_g$, and phase delay, $\tau_\phi$, are frequency-dependent, and they can be computed from the properly unwrapped phase shift $\phi$ by

It stems from the definition of the Laplace/fourier transforms using $e^{-st}$ or $e^{-j\omega t}$. This can be checked intuitively by looking at the transform pair of a delayed impulse, compare the time domain delay to the frequency domain phase. If you modified the transform to use $e^{+st}$instead, it would be the other way round.

Not the answer you're looking for? Browse other questions tagged group-delay or ask your own question.

2
What is the relationship between group delay and propagation delay for a filter?
8
Negative group delay and envelope advance
8
Physical Meaning of Negative Group Delay for causal LTI systems
0
Calculate the time delay introduced by group delay for IIR-Filters