I have read some text about the eye pattern (or eye diagram), but I do not understand how should I read it.

The wikipedia definition of it is this one:

In telecommunication, an eye pattern, also known as an eye diagram, is an oscilloscope display in which a digital signal from a receiver is repetitively sampled and applied to the vertical input, while the data rate is used to trigger the horizontal sweep. It is so called because, for several types of coding, the pattern looks like a series of eyes between a pair of rails. It is a tool for the evaluation of the combined effects of channel noise and intersymbol interference on the performance of a baseband pulse-transmission system. It is the synchronised superposition of all possible realisations of the signal of interest viewed within a particular signaling interval. 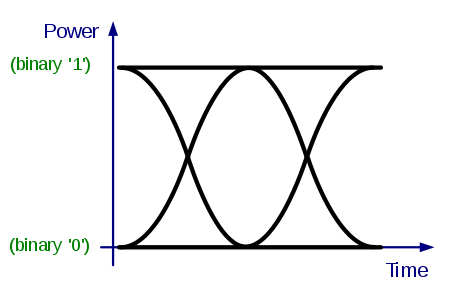 So my first question is: how does an ideal eye pattern look like?

My second question is about how should I read it, and I think that in order to understand this I should know how it is built. For instance this page shows it in this way: 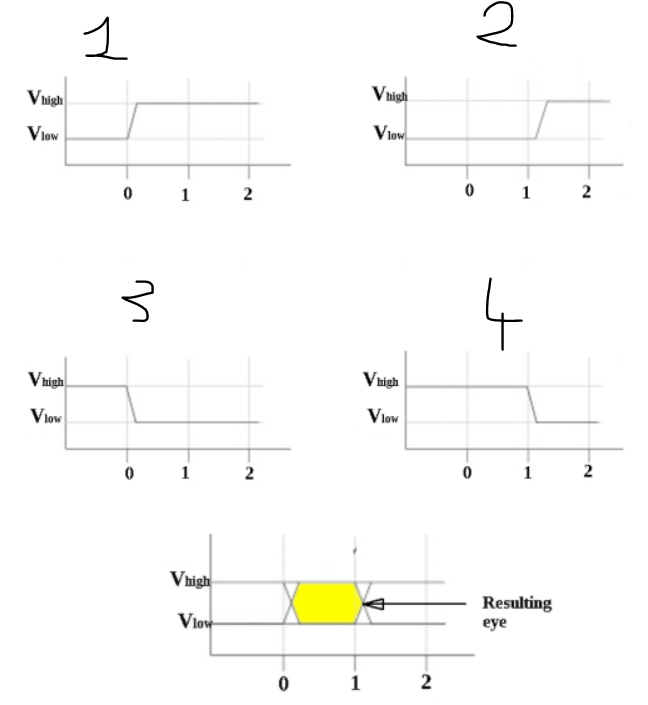 According to wikipedia, it is sufficient to make the superposition of all the signals represented in picture. I understand that the resulting signal is that shown in the last graph. But, how should I read it? Which are the advantages of analyzing it instead of the single signals properties (edges etc)?

It is the objective of the receiver to make the best estimate for each symbol as to what was transmitted. This is often done by ultimately determining a decision time in each sample (through timing recovery) on the waveform after it has been processed by the receiver (equalization and matched filtering) in which to sample the waveform and make a decision as to what symbol was transmitted.

The eye diagram superimposes the waveform for each symbol at the point in the receiver just prior to decision. The eye diagram readily shows the ability to make a decision between signal levels; so the ideal eye would show that there is a lot of margin both in the vertical and horizontal axis to allow for a minimum error rate (what we would call a wide eye opening). As the opening narrows, it would show that there is an increased sensitivity to noise since any added noise would cause a value to pass a decision threshold resulting in an error (this could be phase noise or jitter in the vertical direction and amplitude noise in the horizontal direction, or intersymbol interference which effects both directions).

I have this graphic pasted below that I created for one of my courses that may be useful in answering your question. This particular eye diagram is over two symbol durations. The waveform directly below the eye-diagram plot is replicated in the eye diagram as the darker blue lines, amidst the rest of the trajectories of the waveform from symbol to symbol over a much longer duration as given in the lighter blue lines: 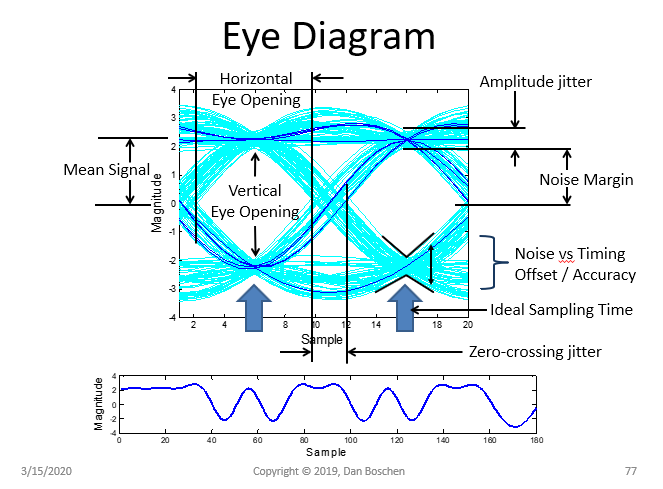 Other examples of eye diagrams are shown below. The first is for QPSK, where we see the constellation on the left with the ideal sample locations in red, and the remaining trajectories from symbol to symbol everywhere else. On the right is the eye diagram formed from the real and imaginary components of the waveform. 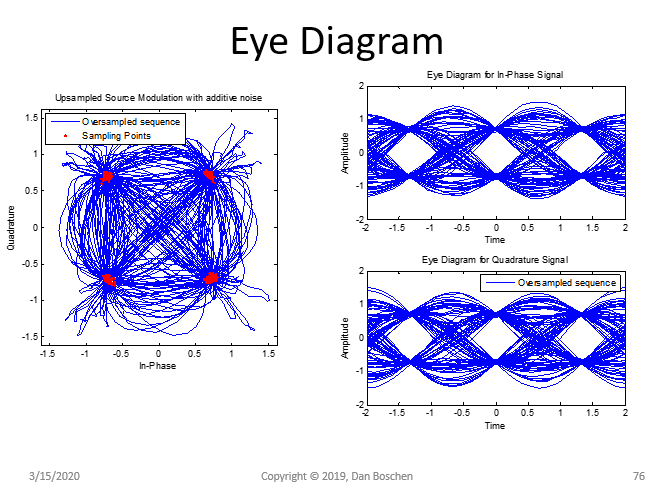 And below is an eye diagram for a 16 QAM signal before and after the root-raised-cosine filter in the receiver. Here we clearly see the utility of the eye-diagram in that we see due to the proper filtering we have significantly increased our margin against noise. This would be similar to using the eye diagram to assess the effectiveness of equalization or to determine if certain filtering in our receiver is degrading our ability to obtain a low error rate due to the eye closing. 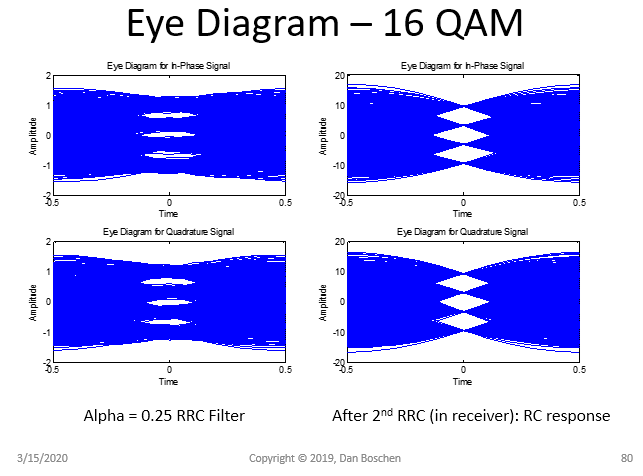 Not the answer you're looking for? Browse other questions tagged filters signal-analysis digital-communications continuous-signals digital-filters or ask your own question.

0
How to generate eye diagram in Matlab ( without communication toolbox)
1
Sampling signal after root raised cosine
-1
Design a timing recovery algorithm with predefined samples with max amplitude
0
What is meant by channel knowledge? Difference between partial and full?
1
QPSK demodulation
0
Why is the noise on an eye diagram not in the centre i.e. at 0?
-1
filtering my received Signal by LPF

1
What is the physical interpretation of the dB scale on a bode plot and what is a negative dB?
0
QAM Constellation Construction - Basic 4/8 QAM
2
Creating an Eye Diagram for QPSK Simulation
1
Speckle pattern - speckles detection
4
What's Logic Behind the Construction of Sobel's Filter in Image Processing?
0
Are the error probability of orthogonal signal and on/off signal the same?
0
SNR Signal to noise ratio of Pseudo random bit sequence (PRBS)
0
How to generate eye diagram in Matlab ( without communication toolbox)