From my reading, I see that there are two ways people usually do carrier synchronization:

Are there any carrier synchronization techniques which are non-data-aided and blind in the sense that all they require are IQ samples? I'm thinking of a scenario where I could give the technique a QPSK signal or a 16-QAM signal and the frequency offset would be fixed for both signals.

The best idea I have so far is to use a combination of signal identification and one of the two methods above (IQ samples $\rightarrow$ Signal ID alg. $\rightarrow$ Choose correct traditional technique). Maybe this is a good way to go about it, but if there is some more formal method, I am unsure.

Things that I know or have existing ways to estimate:

The fourth power method is something that I known of but not in the way that is being described by Dan and Marcus. Apparently can be used for general constellations:

The problem is I don't fully understand what is happening. I understand for BPSK or QPSK how raising to the fourth power, all the points go to a single phase and then you can see the frequency offset but for the random constellation I generated, this doesn't happen.

To try and understand what is happening I plotted what happens to the signal when raising to the fourth power: 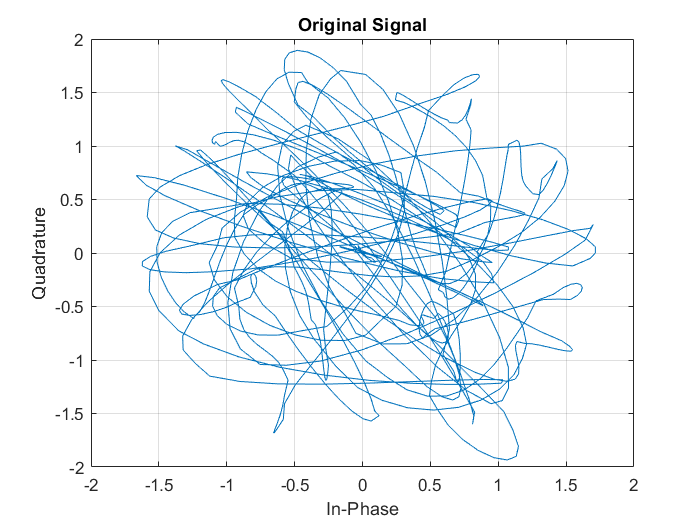 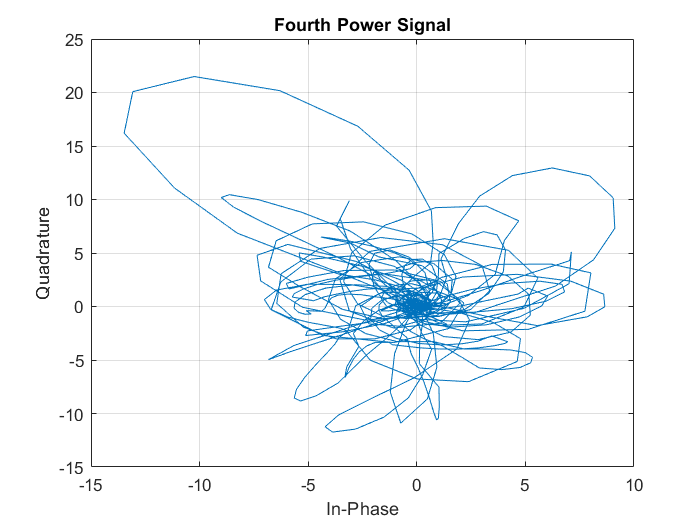 I see more points around (0, 0), but this also happens if I raise to the fifth power, as well as a peak at 5x the true frequency offset. What is special about the fourth power and do raising to other powers ever offer any benefit? (For a classic M-PSK constellation, you'd raise to the $M^{th}$ power)

In case of future readers, between the accepted answer and the paper, Blind estimation of frequency offset in the presence of unknown multipath, I was able to gain a better grasp of the "raising the oversampled signal to a power" method.

One approach not yet mentioned is frequency multiplication by a factor of the number of phase positions used followed by a PLL for noise reduction and then a frequency divider by then same factor. The reason for this is when you multiply the frequency by N, you also multiply the phase by N. If the phase positions are selections of $2\pi/N$ (or those with any fixed offset), then multiplying the phases by N results in a consistent phase angle versus time, which then results in a fixed frequency tone that a PLL can lock to.

For example with BPSK (2 phase positions) a simple squaring will produce a specular component at 2x the carrier frequency since changing between 0° and 180° will result in changing between 0° and 0° (at twice the frequency) after doubling. With QPSK (4 phase positions) you need to raise the signal to the 4th power (which will quadruple the frequency, and the phase). The reason for the PLL is that any AM components (through pulse shaping or QAM modulation) will result in other lower level frequency components that the PLL will essentially filter out.

To answer your question as to what is so special about raising to the Nth power is that you basically raise to a sufficient enough power such that the modulo phase variation of the result is equivalent to small angle PM (which has a dominant carrier) in contrast to BPSK for example which has complete carrier suppression with equiprobable data.

If you know the pulse shape and bandwidth, a band-edge detector would be a classical first step; see fred harris' talk on that (+slides).

After doing that, you'd have a good carrier frequency and even phase estimate.

You'd do that before estimating whether it's PSK or QAM, because the latter becomes much easier after.

You could then use a PLL to track and fine-tune at lower computational effort, typically (that depends).

If your frequency offset is small you can do timing synchronization and then carrier recovery which is only based on the rotation of the IQ samples.

I found PLL confusing until I understood them in a statistical sense with the filter being an averaging mechanism.

Timing synchronization can be done with variance minimization or power maximization, etc.

Not the answer you're looking for? Browse other questions tagged signal-analysis digital-communications synchronization or ask your own question.