I'm reading a paper about designing a non coherent discriminator for GNSS receiver. I came to the equation

I'm not sure about that symbol < how would I write this in a small pseudocode ? for example C++/python ?

When considering PLL with extended integration time, several correlator outputs, obtained from subsequent portions of the input signal, are evaluated and used for producing an improved phase estimate. For this reason, the index k = 0, 1, ..., K − 1 is introduced and the different correlator outputs are denoted as Pk = PI,k + jPQ,k = dkAc exp{ jφ} + ηP,k.

also I'm wondering how would I describe the steps for that loop archietecure in pseudo code ?

the loop architecture depicted in Fig. 2 is obtained. The input signal is, at first, integrated over one bit period; the complex correlator outputs, Pk, are then squared, further integrated, and fed into a four-quadrant arctangent that provides the discriminator output. 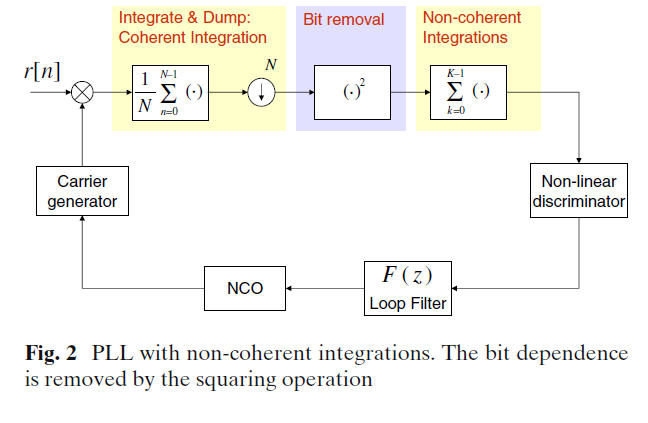 That $\angle$ is "angle". As the text right below it indicates, it's the phase of a complex number, in this case the phase of the sum of squared $p_k$.

Your second question: I really don't think pseudocode makes this any clearer, but sure:

Not the answer you're looking for? Browse other questions tagged signal-analysis pll or ask your own question.