For OFDM we select the known gold sequence as the preamble or pilots. We can correctly estimate the channel(10 to 20taps).

Is there any relationship between the length of preamble and the number of taps of the channel?

For eg. Using a length of 8 pilot samples can we detect a channel of 20 taps?

For eg. Using a length of 8 pilot samples can we detect a channel of 20 taps?

If your OFDM system is sensibly designed, then, no, you need a pilot on every subcarrier. They don't necessarily have to be sent in the same OFDM symbol.

"Sensible" OFDM design means that you choose your subcarrier spacing no smaller than you have to. The reason that you're doing OFDM in the first place is always that you have a frequency-selective channel and would like to divide that big problem into many smaller problems by dividing that frequency-selective channel into ideally flat subcarriers. You'd call the bandwidth in which you can reliably consider the channel flat coherence bandwidth. If you're narrower than that, everything is fine, if your subcarrier is wider, you run into frequency selective fading trouble.

Now, you can't choose an arbitrarily large number of subcarriers – remember, that number is directly proportional to the temporal length of your OFDM symbol, and if you make that longer than it needs to be, you risk it becoming longer than the coherence time. That means your channel changes during your usage of it, and you run into temporal fading trouble.

Therefore, that system will simply have as many different subcarriers as it has subcarriers. You hence need a pilot on every single one of these, at least once in time.

Luckily, temporal changes tend to be relatively benign if your symbols aren't too long: phases tend to linearly shift, so extrapolation in time direction tends to work OK. Thus, modern OFDM systems tend to have "all pilot" symbols at the beginning of "superframes", and then pilots sprinkled across the time/frequency plane over the remaining OFDM symbols in that frame. That's sufficient to interpolate both in time as well as in frequency domain between these positions¹.

Look at LTE, for example (source of that image): 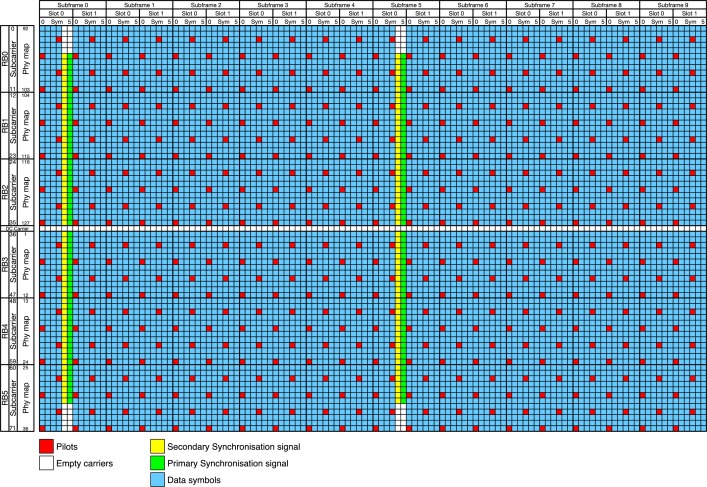 The red dots are the "sprinkled" pilots, and the green and yellow ones are "pilot-only"/synchronization OFDM symbols. The blue ones actually carry data.

For OFDM we select the known gold sequence as the preamble or pilots. We can correctly estimate the channel(10 to 20taps).

As you talked about channel delay spread, which is expressed in tap, I assume you want to track the frequency variation. This is equivalent to "correct" sampling channel frequency response.

The intuition is that the condition $n_p\Delta f < 1/\tau_m=B_c$ implies pilot distance must smaller than coherence bandwith.

More if you ask more.

Not the answer you're looking for? Browse other questions tagged ofdm preamble or ask your own question.

12
How is symbol synchronization with OFDM done?
4
Pilot symbols in IEEE 802.11a
5
What's the reasoning behind changing pilot tones in OFDM?
3
Preamble Detection and Frequency Offset Estimation in radio packets
1
The use of LS estimation with Vector OFDM
0
channel estimation based on time-domain pillots
0
Do the effects of OFDM pilot tones spacing appear in time or in frequency domain?