How Hilbert transform helps us in communication? What is the practical significance of it? Specifically how is the Hilbert Transform used to create single side-band frequency translators?

There are many applications for the analog equivalent of the Hilbert Transform, often implemented with “90 degree power dividers” also referred to as “quadrature splitters” as well as broadband variants implemented with phase tracking networks.

One application is single sideband frequency translators done with IQ mixers; I have another posting that details this further here:

Another application is phase shifters and vector modulators where the signal is split in quadrature (To I and Q components) then combined in 0 degree phase after weighting the I and Q components according to the desired phase and amplitude. This can provide frequency translation similar to the approach with IQ mixers. The architectural difference is the use of absorptive bi-phase attenuators in each quadrature leg instead of reflective mixers which is more appropriate for static phase and amplitude control.

Other common applications for the Hilbert Transform that are done digitally can also be done in the analog with the purpose of converting a double sideband IF signal to be single sided (positive or negative frequency only) or creating a baseband analytic signal (which must be complex).

The link I gave above that demonstrates using the Hilbert Transform to frequency shift a signal is converting the signal to single side band frequencies only. Since the OP further asked this question I will explain that further in this context.

In comparison, the implementation for Single Sideband frequency translator uses two 90° power dividers as shown in the diagram below. I have designated one output for each of the power dividers to represent the imaginary axis by putting a label $j$ on those ports just to show similarity to the Hilbert Transform: there is no reason I cannot define one output to represent such even though many may argue that both are real signals-- whether a signal is real or imaginary rests entirely in our definition and consistency with our rules of math. Regardless the same block diagram would similarly work with real signals, and is generally considered as such. If you swap one of the quadrature legs the resulting output would be the other sideband. 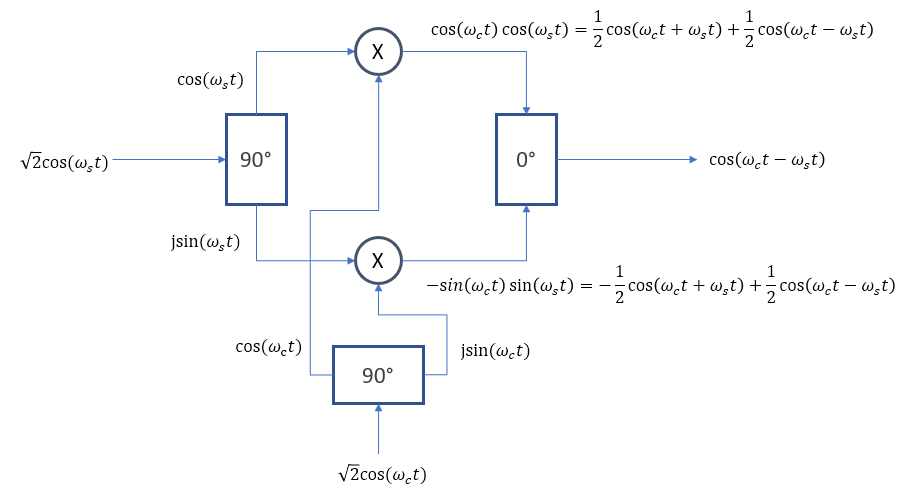 Not the answer you're looking for? Browse other questions tagged digital-communications hilbert-transform communication-standard or ask your own question.