Ouput SNR of an integrator

Say I have an integrator with transfer function $\dfrac{\mathrm{F_s}}{s}$.

This integrator has an initial condition zero and integrates from $t=0$ to $t=\dfrac{1}{Fs}$.

This calculation does not seem consistent with simulation. Is there something wrong with my derivation?

I hope you do not mind, but I am going to change terminology a little bit. Since you mentioned simulations, suppose you are sampling the Gaussian white noise, at the input to the integrator, at a constant rate of $f_s$ samples per second. The point spacing, $Δt$, is $1/f_s$ seconds. Suppose $N$ independent consecutive samples are collected. Then the $N$ samples span a period of $τ_a$ seconds and this equals $N Δt$. The sample mean of the $N$ noisy inputs to the integrator obviously provides an estimate of the known $V_{in}$ input voltage. The sample variance of the $N$ noisy inputs to the integrator provides an estimate of the known $σ^2$ variance of the Gaussian white noise. The power SNR at the input is $(V_{in}/σ)^2$. The empirical estimate would be the square of the sample mean divided by the sample variance and bigger $N$ values are almost surely better.

The Gaussian white noise has zero mean and $σ^2$ variance, so the bilateral noise power spectral density, $η$, is $σ^2 Δt$. The ideal integrator has $τ_i$ integration time constant. (For an ideal op amp integrator, with just an input resistor, $R$, and feedback capacitor, $C$, $τ_i = RC$. The sign inversion is trivial and can be ignored.) Now suppose that the integration period, i.e., integration aperture or gate duration, is $τ_a$ seconds, exactly as above. Assume the integrator has initial condition zero, integration starts at $t = 0$ and ends at $t = τ_a$, so $τ_a$ is simply the reciprocal of the OP’s $F_s$. N.B. My $f_s$ is not the OP’s $F_s$.

Then the DC power gain of the integrator is $(τ_a/τ_i)^2$ and the noise equivalent bandwidth is $1/2τ_a$. Now consider two cases.

The figure below shows that, if nothing was known about the input waveform for $t > τ_a$, then the input could be treated as though it was a rectangular pulse starting at $t = 0$ and ending at $t = τ_a$. The integration would effectively be gated integration, which would be a simple case of matched filtering: the impulse response of the (aperture synchronized) gated integrator is a rectangular pulse of duration $τ_a$ and reversing it changes nothing because the gated integrator's impulse response is symmetric. The figure below shows the calculation of the matched filter power SNR. The integration time constant, $τ_i$, has been set equal to unity because it affects both the pulse energy, and the noise, the same way, so it divides out. 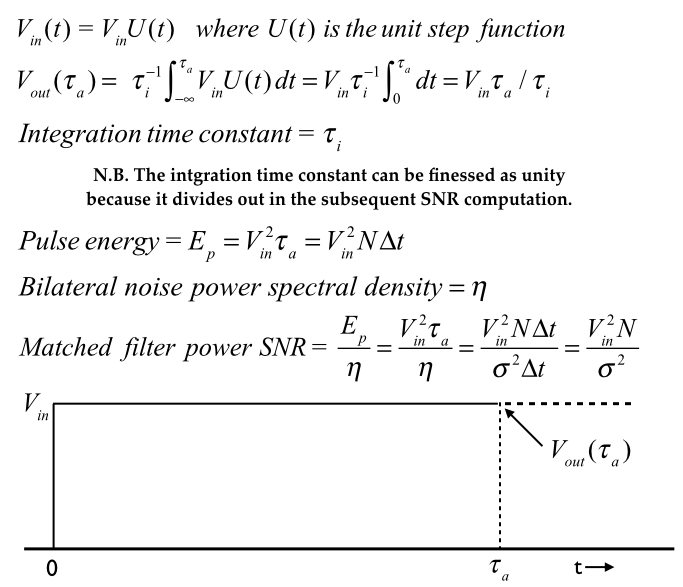 Not the answer you're looking for? Browse other questions tagged noise snr or ask your own question.

0
Calculating the SNR from the power spectrum. Is my suggestion relevant?
1
SNR for complex valued signal and when to use SNR and when to use Eb/N0?
2
How Does the RMS of White Noise Change with Sampling Frequency?
2
What's the relationship between the parameters of this noise generator and the gaussian curve it produces in the frequency domain?
3
Input and Output SNR Calculation in AM receiver input and output
0
Relation between constellation SNR and baseband SNR
2
How exactly does one apply a Hanning Window for a spectral estimate?
1
why does my integrator perform noise shaping?
2
Is noise figure dependent on input noise power?