I have a 2D signal, with intensity as a function of two angles (alpha and beta), as shown below. 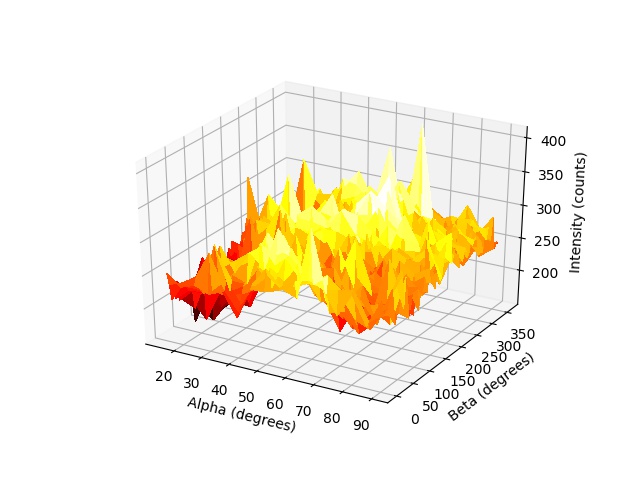 This contains a background, which makes the signal's base-surface locally convex-concave. I would like to identify and subtract the background such that the bottom of the signal becomes approximately planar and further processing can be done.

My initial thoughts were to fit row-wise/column-wise baselines and individually subtract the background from each line. However, I think signal processing methods may be better suited for this task. I have calculated the FFT for the signal using SciPy/Python, but don't find any obvious frequencies that I should remove.

I'm not even very clear about whether I should be looking to remove the highest frequencies, the lowest frequencies, or both. What would be a good way to proceed from here, using Python? Is the power spectral density better to look at rather than the FFT itself?

EDIT : The signal comes from a diffraction experiment, where there is a source, a specimen and a detector. The specimen is tilted from 15 degree to 90 degree in steps of 5 degree. At each tilt, it is also rotated through 360 degrees in steps of 5 degree. The tilt and rotation are the angles alpha and beta shown in the figure. Corresponding to each alpha/beta combination, the detector receives some signal, which we are plotting as intensity.

There are certainly ways to "kill" the underlying signal but in this case, it is probably better to do it gracefully.

In general, completely supressing a (usually) low frequency background oscillation is done by using a high pass filter. Other ways this can be achieved is by applying a median filter to extract the variation and then subtract it from the original signal, or even peforming a low order polynomial fit to the data and then extract the surface this polynomial describes. For slightly more information on those, please see this response.

Here however, the background signal is not just any nuisance but it is related to the measurement. Therefore, if we just try to chuck it away, we may be introducing a problem to the measurements we are trying to get to. So, the better approach would be to see if it is possible to take the component out somewhat more reasonably.

In 1 dimension, the "fit" looks like this (here in GNU Octave but easily translatable to other platforms too): 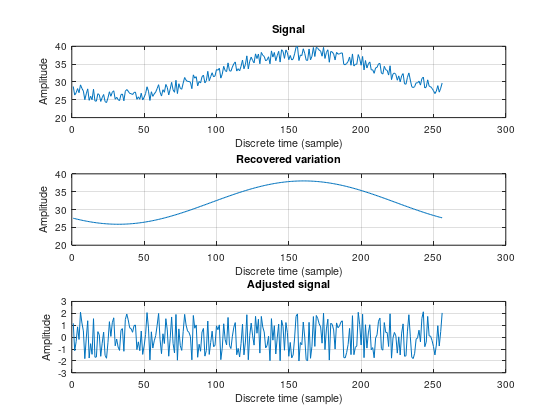 Where, basically, what we have recovered after subtracting the predictable part is that additive signal which here looks like noise but could be any remaining "form".

This is basically Discrete Fourier Transform (DFT) but just for 1 component, the one we know (or, can predict) is in the signal. These lines:

Perform the forward transform. And this line:

Performs the inverse transform but just for one component. Notice here that signal_amp recovers both the amplitude and the phase of the sinusoidal we are after.

A similar approach would be followed in two dimensions but with the necessary adjustments: 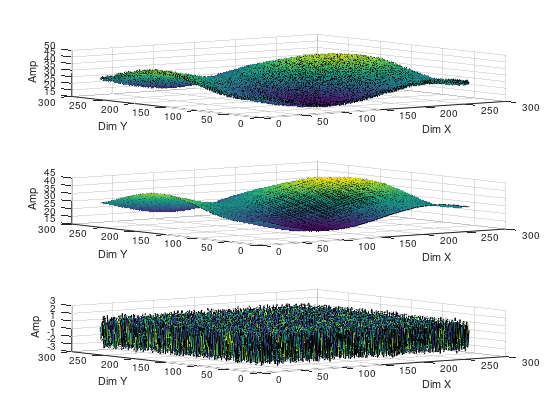 Where as you can see, the variation is gone and only the additive component has remained. The two snippets have an almost one-to-one correspondence to show both the similarities but also adjustments you have to apply when considering higher dimensions.

In your case, since you are dealing with "counts" that must remain positive, you can ommit the DC (the first component that is simply the average across the signal) and only remove the variation.

Not the answer you're looking for? Browse other questions tagged fourier-transform python power-spectral-density background-subtraction or ask your own question.

1
How to detach overlapping contours but not to remove small ones. Alternative to erosion-dilation cycle

1
Remove background from image
7
Removing a sinusoidal artifact from a set of movie frames
5
Demodulating FSK audio in Python
7
How to correctly compute the EEG Frequency Bands with Python?
4
Determine if two signals are the same?
1
Producing masks from mostly-static-background subtraction when given the background
0
Detect lines transitioning to blobs in images
0
Extracting different frequency bands (alpha, beta, gamma) from MEG source estimated data