I am trying to do a fast Fourier transformation on accelerometer data from a shaft rotating at varying speed in Python.

What I have done so far:

1: The original plot was in the time domain, and I therefore did a order analysis (resampled), and got the following plot: 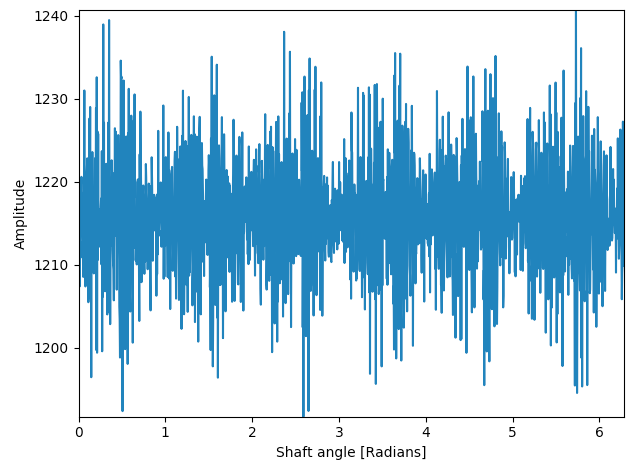 This plot shows the angular rotation plotted against amplitude.

3. Result, with the normalized amplitudes plotted: 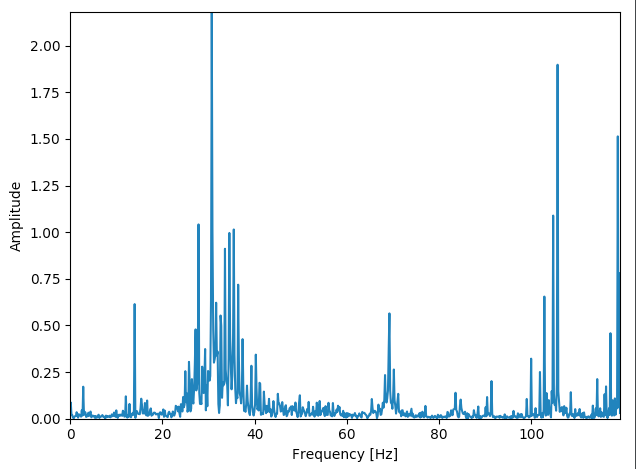 There are a few things going on here:

Does this thought process look correct?

The main reason for this is that you are not performing a resampling step that is the differentiating point between the Discrete Fourier Transform (DFT) and order analysis.

Is it correct to say that the final fft plot is in the frequency domain? From this link, ...

Yes, it is correct to say that the final FFT plot is in the frequency domain. But, the order plot would be in a quantity that has no units. It is basically a multiplication factor.

A little bit about Order Analysis and how it is different to the DFT:

OK, so you have a rotating shaft which you sample at some $Fs$ using an accelerometer. Let's use the figure provided, at 25kHz.

More importantly, what has happened from the point of view of the data that we are interested in (the data about 1 revolution), the sampling frequency has been halved.

Imagine that there is a "bump" (for whatever reason, a bearing, uncentered load, structural resonance, whatever). At 1200 RPM, you can hear that thing banging across the floor. But at 1 RPM, the discontinuity is so "shallow" that it is spread across millions of samples, if it is even there. At low RPM, the elasticity of the materials might allow the power of this discontinuity to scale linearly. But at high RPM, the non-linearities kick in. Now, the shaft cannot bang off of its housing (it can, but by then it is too late) and you can see this because the structure will give rise to additional harmonics. So, it is not only that at high RPM things become louder, but also, new things show up, that were not observable at low RPM.

Part of the answer here is to increase the sampling frequency.

But, we would still be left with no way to normalise the data for the increase in speed. Therefore, if we were to run DFT on a block of data, we would not be sure how much of a rotation or where does interesting behaviour occurs.

One approach to this would be to physically modulate the sampling frequency by the RPM.

This is what Order Analysis does, but it does it in software. What you are doing prior to DFT is resampling the signal (as a function of RPM), so that, no matter what the RPM does (going up or down), 1 shaft revolution sits in exactly the same amount of samples.

By doing this, you can observe consistent parts of the spectrum as the RPM increases (e.g. harmonics that are predictable as per the linked article) and whether interesting components start to appear at specific RPM.

This is the reason why the spectrum looks like two peaks connected with a curving ribbon on the first spectrum from the figure of the book you are posting.

What has happened in the second picture is to adjust the timing of the samples based on the RPM, so that each revolution now takes up exactly the same number of samples.

There is nothing additional hapenning to that sinusoid, except modulating its frequency in a way proportional to the RPM "signal". If you adjust for the RPM, what you see is basically just the same sinusoid.

A better way to visualise this is via the spectrogram. Here is a sweeping sinusoid: 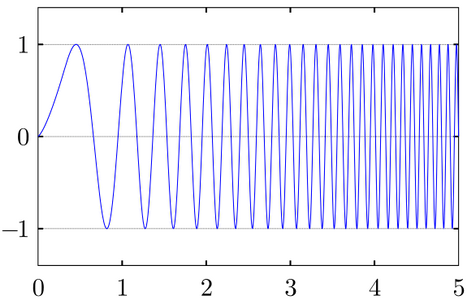 And here is its spectrogram: 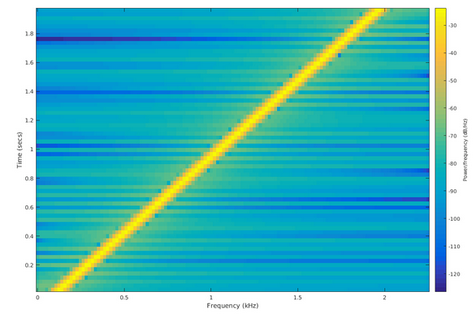 (Both images are from the Wikipedia article).

What the spectrogram is, is repeated applications of the FFT in short overlapping blocks throughout the signal. Therefore, its x-axis is time, its y-axis is frequency and the cell colour is proportional to the strength of that harmonic.

If you apply a spectrogram to your data, you will notice that the "run-up" (or run-down) shows up clearly as increasing (or decreasing) "lines". The reason why there might be more than one lines is because there are additional components to the rotation that also happen faster (or slower), depending on the RPM.

What we really want is to get rid of the "run-up" (or run-down) component of the DFT.

What we are interested in is the spectrum associated with 1 shaft revolution at some fixed RPM. This is equivalent to one vertical slice of the spectrogram at some time instant (which however in our case is proportional to RPM).

With order analysis, what you are doing is basically "rotating" the spectrogram, at an angle that matches this increasing line. If you did this, in this particular example, you would see a straight line. (Technically, it is not a rotation, but a "skewing", but just for illustration purposes, think of it as rotating this line so that it is parallel to the x-axis).

This is what this re-sampling (mentioned in the figure you attach) refers to.

Not the answer you're looking for? Browse other questions tagged fft discrete-signals frequency-spectrum python or ask your own question.

0
defining the frequency range with fast fourier transform
0
Plot real-time FFT using matplotlib
3
Self studying, getting a quality spectrogram
1
How do i select my frequency range to plot when fft is made on time domain
2
Numpy fft2 frequency shift
1
Fast Fourier Transform using numpy
1
Wind Turbine Vibration Analysis: Which approach?
2
Inaccurate phase returned by np.angle
0
Why does my amplitude change upon inverse Fourier Transform when I am only randomizing the phase of the fourier transform using Python numpy?