How to allign audio signals after DTW?

Hello I am not a domain expert in signal processing but I need to align two audio signals.

I have seen the following page https://librosa.github.io/librosa_gallery/auto_examples/plot_music_sync

I have implemented DTW and so many other pages. Most of these are using DTW but the problem is that none of them are showing WHAT TO DO AFTER I PERFORM DTW!. DTW gives you a cost matrix and wrapping path (D, wp) but nowhere it is shown how to use these two to align the actual signals.

I have come to a github repo https://github.com/chausies/voice_transmogrifier/blob/master/sync_audio.py

But most of the parts of the code seems difficult to understand. Like why he used variable_phase_vocoder or what close_points is doing. Why to use PchipInterpolator ? In fact why interpolation is done at all in audio?

Please help me in the project. I am new to audio processing.

none of them are showing WHAT TO DO AFTER I PERFORM DTW!.

There are two quotes, at least in the page that you have linked that hint at what you do next, these are:

"We assume that you are familiar with the algorithm and focus on the application. Further information about the algorithm can be found in the literature..."

The linked reference is not a bad start for a book on audio signal processing. The second quote is towards the end:

"...you could apply time scale modification algorithms, e.g. speed up the slower signal to the tempo of the faster one."

And this provides a way towards the answer to your secondary question too.

The "cost matrix" that Dynamic Time Warping returns is discrete with units of samples (e.g. match sample-to-sample), or time.

With reference to this diagram from the Librosa documentation: 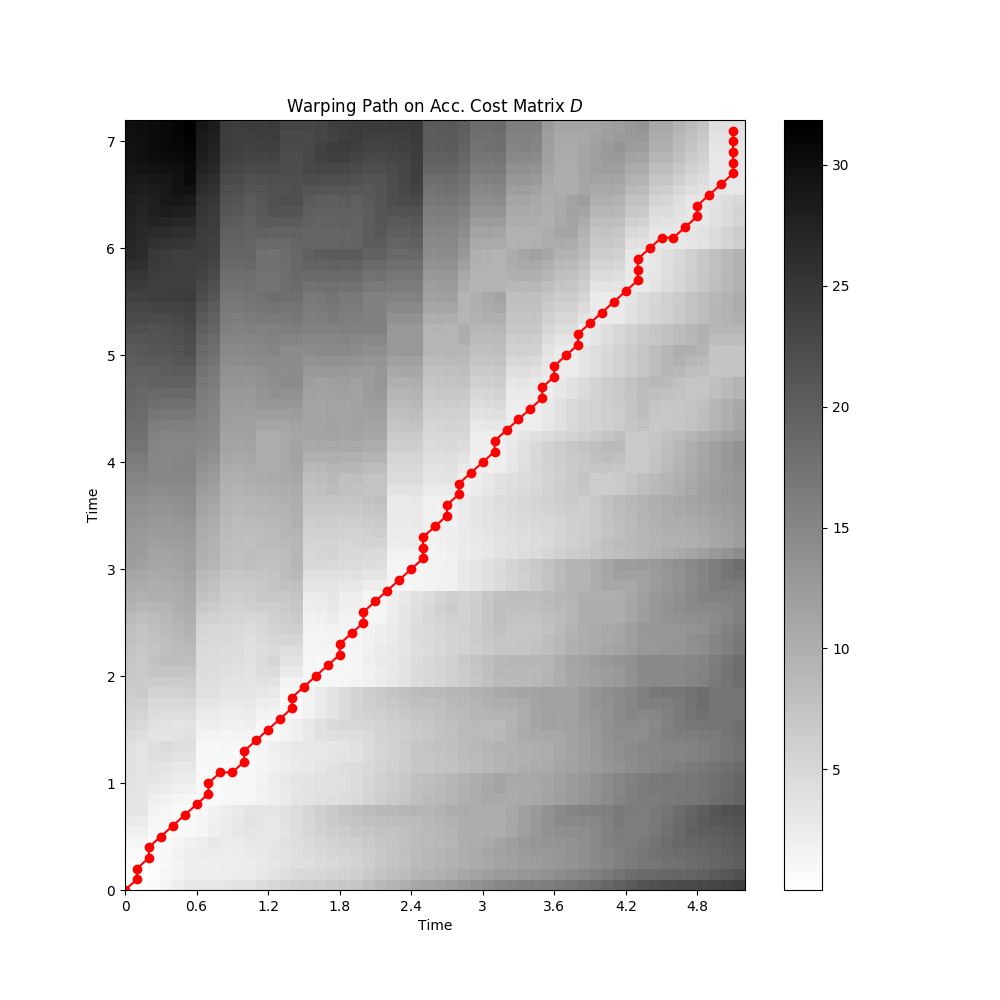 But, most of the times you apply DTW, you are interested in aligning the two waveforms.

In that case, the "cost matrix" can be interpreted as a speed-up or slow-down factor, so that the samples of waveform $x$ catch-up with those of waveform $y$.

...why interpolation is done at all in audio?

When you think of the cost matrix as modifying the speed by which samples are reproduced, you start thinking about how to speed up or slow down a waveform.

Especially in audio, there are many different methods by which you can achieve this. But the easiest way to think about it is as if changing the speed by which your "sample pointer" rolls through the waveform.

The most trivial example is this: At the waveform's $Fs$ (Sampling frequency), the sample pointer rolls through the waveform at a rate of $Fs$ samples per second. To make the recording sound twice as fast, you can replay it at $2 \cdot Fs$. But, what happens when, to make the two waveforms catch up with each other, you have to run the "record" at $1.056 \cdot Fs$?

This is the reason for using interpolation. For example, to work out the sample value at time $1.056$ when you know the sample values at $1$ and $2$, you could use plain simple linear interpolation. This assumes, that when the Analog-to-Digital Converted (ADC) is not sampling the signal, this signal evolves smoothly (as a line) between its values. For high enough $Fs$, this assumption might be valid.

This method is implemented in numpy 's interp() function or even MATLAB's interp1().

Because of this need of having to read in between samples, interpolation is used in such operations as reverberation, chorus, pitch shifting and others. This linear interpolation method will work in general for high enough $Fs$ but as the speed-up/slow-down factor becomes bigger and potentially, applied over a longer block of audio, the artifacts become more audible. This is what more complex methods of applying pitch shifting (such as the phase vocoder), are trying to address.

Not the answer you're looking for? Browse other questions tagged python interpolation synchronization or ask your own question.

7
How to mix two signals without changing the overall loudness?
0
Measure the amount of drift in video and audio frames
0
Trouble with time-syncing two radio signals using cross-correlation
0
How to prevent distortion after down-sampling?
1
Symbol Synchronization for GFSK/FSK signals in GNU Radio