Frequency response of a system given its block diagram

Given the following block diagram, I am asked to find the frequency response $H(f)$ of the system.

Your math looks correct, thanks for including what you have done. Also for such a block diagram of a linear system, you can rearrange each of the three blocks in any order at the points where the nodes come together (can't break loops) - For example, you can move the derivative to the end without changing the overall result. This may make it even more obvious that the derivative cancels with the integrator and we are left with the simple delay and subtract.

It helps to have an intuitive view of this filter when confirming the math. The delay and subtract is referred to as a comb filter. A delay line (the $t_o$ block) does not change the amplitude of the signal but will change the phase proportional to the frequency of the signal coming in: just picture the difference between a very low frequency sine wave and a high frequency sine wave, shift the two the same amount in time and it should be clear that the phase shift is directly proportional to frequency.

The delay and subtract comb filter will have a null at DC or f=0 (this one is obvious as DC will not have any phase shift when it goes through the delay line, and a constant subtracted from a constant is 0). As the frequency increases to the point where the phase is 180°, the signal will have gain of two since the direct path and the delayed path will be in phase. This occurs when $f=\frac{1}{2t_o}$. As the frequency increases further the phase will reach 360° creating a null again at $f=\frac{1}{t_o}$, and this pattern repeats for every additional multiply of 180°.

One you take the square root of your result, you will see that this "comb" response is the absolute value of a sine where the pattern extends to $f = +/-\infty$: 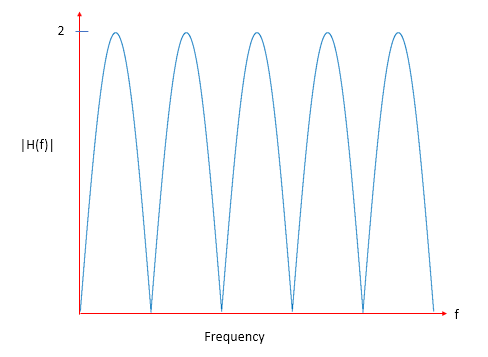