I am taking a undergrad network course that uses Data Communications and Networking 5th edition containing diagrams and legends which I cannot decipher. Specifically the diagram on the right, has y-axis P for power, then z-axis f/N. Does this mean the fraction f/N (frequency/bit rate) or does it mean f or N. Also the start of chapter 4 explains that ratio r is data rate/signal rate or r = N/S. In the legend it gives r=1 so re-arranging the equation, shouldn't S_ave = N/1? 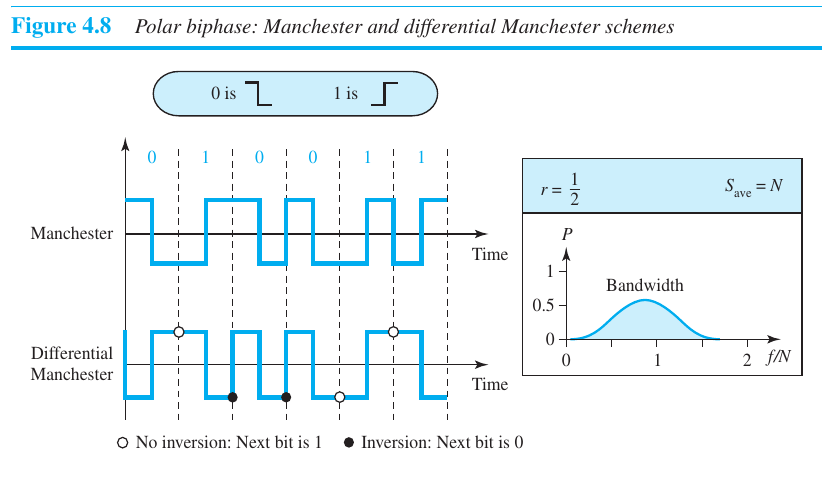 For baseband signals such as these, the (effective) bandwidth is the maximum frequency above which there are no relevant frequency components. Since the required bandwidth is proportional to the baud rate, and since both Manchester and differential Manchester codes have $r=\frac12$ whereas NRZ-L and NRZ-I have $r=1$, the Manchester codes need approximately twice as much bandwidth as an NRZ scheme.

Not the answer you're looking for? Browse other questions tagged digital-communications signal-power or ask your own question.

1
Transmission Bandwidth and Sampling frequency
2
Spreading symbols with sequence before transmission
5
Why not use zero-signal in digital transmission?
2
Calculating Data Rate using Bandwidth, Transmission Power, Noise Power Spectrum Density and Channel Gain
2
Representation, Bandwidth and composition of Digital Signals
1
How to generate random data with a specific bandwidth
0
Why the received SNR increases with bandwidth?