Doubt on behaviour of frequency responce of a system

I am doing loop shaping using $H_{\infty }$ approch, and I have a plant with an unstable pole:

where G is the plant, and K1 is the controller. I am trying to do a confrontation between the approch with $H_{\infty }$ and the one without, in particular I am placing a weight only for the sensitivity function, and designing a controller using the mixed sensitivity design.

What I get if I plot the frequency response of the system in the two cases is the following: 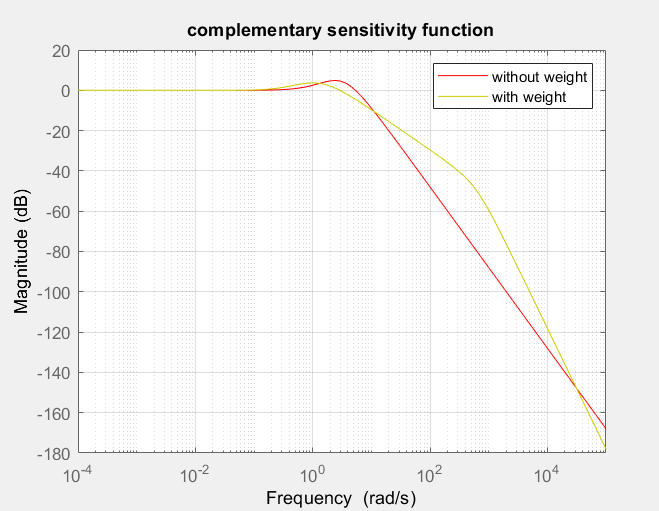 in which the yellow line is the frequency response of the system in which I applied the $H_{\infty }$ and the red line is the one in which I used G and K1 as they are, so without mixed sensitivity and weights.

What I don't understand is why the yellow line has this strange behaviour, while the red line decrease smoothly. 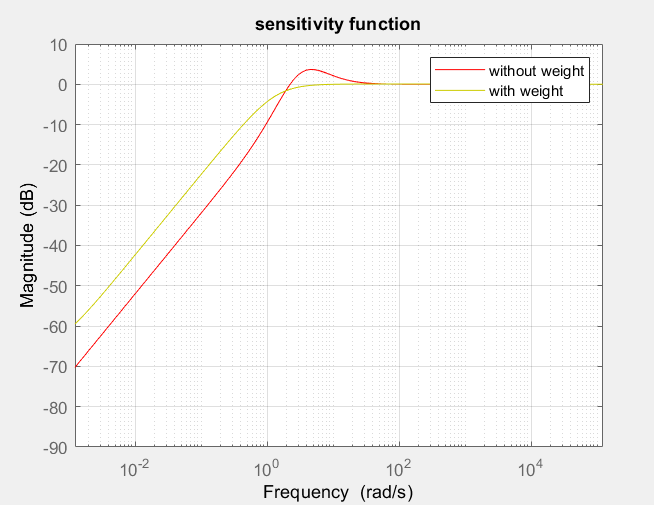 I don't understand how to interpret the behaviour of the yellow line of the complementary sensitivity function.

Can somebody help me?

It appears to have -40 dB/decade roll-off in magnitude starting at 1 rad/sec and transitioning to -120 dB/decade roll-off in magnitude at approximately 300 rad/sec (this suggests you have 2 dominant poles that begin to be dominant when f is at 1 rad/sec and 4 additional poles that begin to contribute at f> 300 rad/sec since each pole would contribute -20 dB/decade to frequency roll-off.

In comparison, red is rolling off at -80 dB/decade consistent with 4 poles. The poles would actually be complex given the frequency peaking in all cases.

Not the answer you're looking for? Browse other questions tagged control-systems control or ask your own question.

3
Control design: under what conditions can closed-loop poles be placed arbitrarily?
0
How can a stable system have a RHP pole?
0
How do I find transfer functions from a state space representation?
3
Why does the control effort increase if the bandwidth of the system is higher then the bandwidth of the plant?
2
Does a RHP zero imposes some limitation in the time domain?
1
Why if I place the zero of the lead compensator at lower frequencies, do I obtain a resonance peak?
4
Stabilizing the inverse transform of a system
2
Region of root locus not inside the feasible region for a given performance specification
1
How to deal with "weird" phase plots in bode diagram when designing a controller