I'm new to Radar in general, and I'm studying RADAR using online resources. I came across the following slide which shows the process flow of the Radar signal processing. 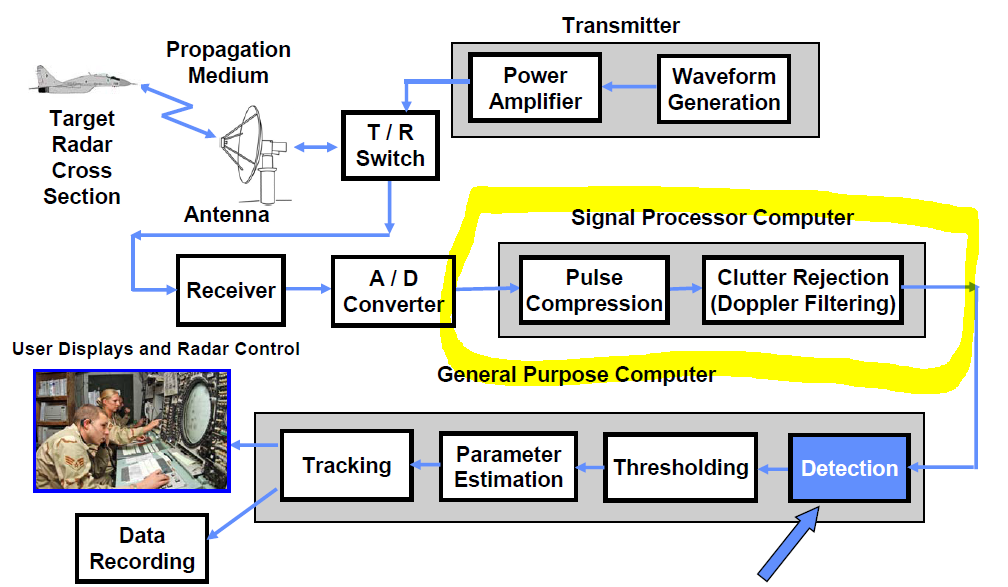 The thing I don't get in the figure is the signal processing block and the general purpose Computer block. The following is my basic understanding of the process flow which is very different than the flow in the picture:

The reasoning is that we need to find the target's range gate before we can process the target's Doppler information, and to detect the target's range, we need to set some threshold to separate our target from other clutters and noise. After we locked the target into certain range gate, we can process the target's Doppler information from the I-Q data obtained after processing the received echo. Any clutters in the same range gate can be rejected by using a set of Doppler filter banks as the target and clutters have their respective Doppler characteristics/frequencies. Could someone explain to me where was my misunderstanding? I just got started, so there must be many things I got misunderstood. So thank you for your time, patience, and help.

Part of your misunderstanding comes from the fact that there are many ways in which the radar signal processing chain is implemented. Depending on the type of radar, targets of interest, hardware, etc., some methods are more appropriate than others. We will consider pulsed-Doppler radar here.

In the chain you describe:

In modern pulse-Doppler systems using pulse compression, the act of performing pulse compression is virtually synonymous with matched-filtering. You can combine these two terms to mean the same thing and simplify your thinking. You are requiring that range detection happen before processing Doppler, but this not be the case. You can very well detect a target using its Doppler information only while being denied range. It is mainly during acquisition of the target that being denied either of the measurement dimensions is truly detrimental. In the tracking phase, you can "track through" and continue to update target velocity information using Doppler only to then later be able to receive good range measurements.

In addition, the system you describe is a more classical approach of using a Doppler filter bank to separate clutter and to determine the target's radial velocity. Many radar systems require that a signal make it past the Doppler filter bank to even consider performing a measurement. Hence why the block diagram you show has the "detection" block coming after the "Doppler filtering" block.

What the block diagram suggests:

These are just the basics! You can implement all sorts of filtering and signal processing algorithms on the range-Doppler map alone to get even more information about your environment and your targets of interest.

Not the answer you're looking for? Browse other questions tagged radar detection array-signal-processing doppler or ask your own question.