The equivalent bit error probability for DBPSK is given as follows but much more complicated to derive:

A complete derivation for the DBPSK case is here:

With the same formula and plotted in comparison to BPSK on Wikipedia (https://en.wikipedia.org/wiki/Phase-shift_keying#/media/File:DPSK_BER_curves.svg): 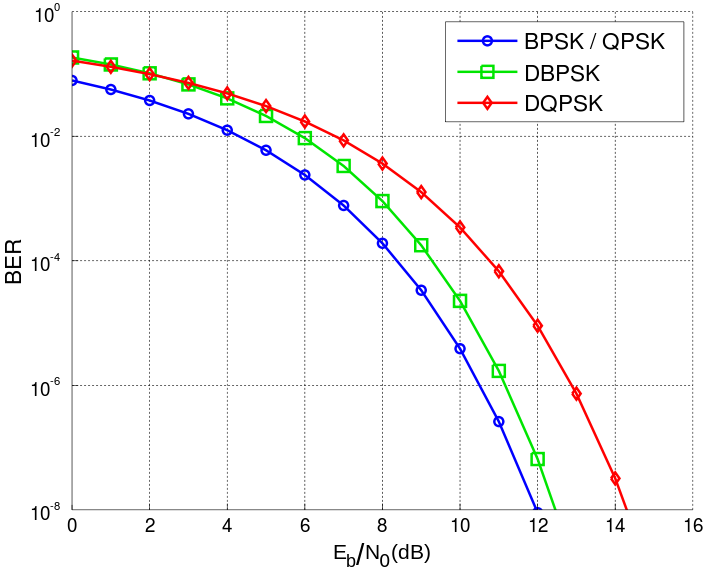 I incorrectly thought I could simplify this derivation by extending the simpler BPSK $P_e$ result through understanding what occurs when you multiply two signals with independent noise (Matt L has provided that here: SNR After Multiplying Two Noisy Signals), since such a product results when performing non-coherent demodulation for DBPSK.

I show this in the block diagram below:

This is the non-coherent structure for DBPSK demodulation. The transmitter is also differentially encoded to minimize error propagation (so that errors always occur in pairs rather than propagate until the next transition).

For real signals, the frequency at the output of the multiplier is the sum and the difference of the input frequencies, so in this case the difference is baseband signal of interest while the sum is the double of the carrier that we filter out with the low pass filter (LPF). The power of both the signal and noise components would be effected the same way in this process, so the SNR at the output of the LPF would still be $SNR_2$.

Given this, combined with the double error property that a single bit error always results in 2 errors assuming we use differential encoding in the transmitter- I can convince myself that the predicted bit error rate for DBPSK would be as follows (reducing the SNR by 2 when SNR >> 1 and doubling the resulting P_e) but from the detailed derivation this is clearly incorrect. I understand the detailed derivation- my question is not with that but what is the flaw with this alternate approach?

It is interesting to note that for higher order M-PSK, this 3 dB result does match (note the difference between QPSK and DQPSK in the plot above). Perhaps this is a clue that real versus complex is a factor?

The flaw in the problem posed starts right from the block diagram that you have posted: it is not the case in DPSK receiver that the RF signal is multiplied with a delayed version of itself and then passed through a low-pass filter followed by slicing etc.

Instead, the RF signal is "demodulated" through a variant of a standard coherent QPSK receiver whose local oscillator is assumed to be synchronized in frequency to the incoming carrier signal but not necessarily synchronized in phase. Thus, the incoming $$r(t) = g(t)\cos(2\pi f_c t+\theta) + n(t), 0 \leq t < T,$$ where $g(t)$ is the baseband pulse, $T$ the bit duration, $\theta$ the unknown RF phase, and $n(t)$ the AWGN (or band limited AWGN if you like to think that the incoming signal has been bandpass-filtered, e.g. as in a tuned amplifier in an IF stage of a superheterodyne system), is multiplied by $2\cos(2\pi f_c t)$ in the I branch and separately by $-2\sin(2\pi f_c t)$ in the Q branch. Since \begin{align} 2\cos A \cos B &= \cos(A+B) + \cos(A-B)\\ 2\sin A \cos B &= \sin(A+B) + \sin(A-B) \end{align} we get that the signal parts of the two mixer outputs are \begin{align} 2\cos(2\pi f_c t) g(t)\cos(2\pi f_c t+\theta) &= g(t)\cos(4\pi f_c t+\theta) + g(t)\cos(-\theta)\\ -2\sin(2\pi f_c t) g(t) \cos(2\pi f_c t+\theta)&= -g(t)\sin(4\pi f_c t+\theta) - g(t)\sin(-\theta). \end{align} The double-frequency terms in the mixer outputs can be eliminated explicitly by low-pass filtering the results before doing anything else, or they get eliminated implicitly when we do matched filtering on the two mixer outputs. Now, matched filtering is typically done by via correlation (multiply by $g(t)$ and integrate from $0$ to $T$) and thus we effectively get a complex-valued decision variable $Xe^{j\theta} + \mathcal CN(0,\sigma^2)$ at the end of the integration period. We can't make a decision just on this decision variable because we don't know the value of $\theta$; depending on what $\theta$ is, the decision might be wholly bass ackwards from what it should be! But what we can do is save the decision variable and use it $T$ seconds later to answer the question

Turning to the question of why the trick of using the coherent BPSK error formula as a guide and simply replacing the SNR for BPSK with the SNR for DBPSK in the error probability formula doesn't give the right answer for the DBPSK error probability, the issue is that the two systems make decisions differently and there is no obvious reason why the error probabilities of the two systems should be given by the same formula in terms of SNR. Note, for example, that $P_e = Q(\sqrt{2E_b/N_0})$ for coherent BPSK but only $Q(\sqrt{E_b/N_0})$ for coherent FSK.

Not the answer you're looking for? Browse other questions tagged demodulation bpsk or ask your own question.

2
Non-coherent receiver for DBPSK: Implementation details
0
High Transmission Power : BPSK or QPSK?
0
M-Array DPSK decoding and encoding
1
why does the decision boundary change in BPSK? is it true?
1
MATLAB: Adding Noise with Regard to Signal to Noise Ratio (SNR) or EbNo?
2
Meaning of AWGN complex and real noise under BPSK Decision Scheme
2
Block diagram of M-PSK modulation and demodulation
1
Error probability for 8-PSK
2
Averaging of a phase flipping signal