What are the missing steps in the derivation of this equation?

I am trying to understand the model of a piano hammer described here. The relevant excerpt is: 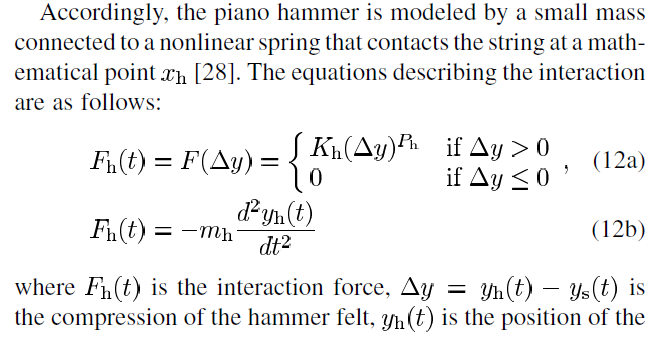 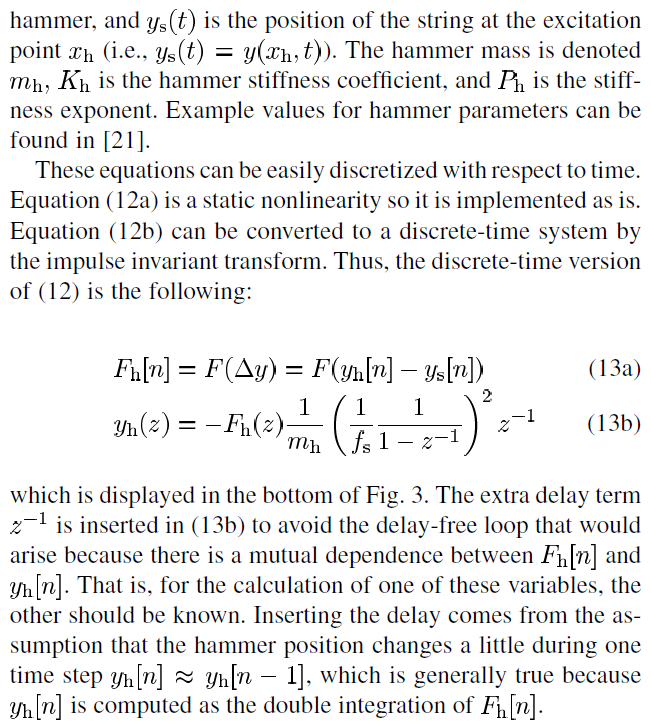 As I understand it, they are saying in (12a) that if the hammer spring's uncompressed end's y position is greater than the string's y position, then the force of the hammer/spring will be:

(12b) is simply saying force is also equal to negative mass of the mass-spring combo times its acceleration. This is Newton's law I believe, where the spring's force (12a) must equal the mass's inertial force (12b).

The derivation of (13a) is straightforward since there's no change.

(13b) I'm having trouble understanding though. The best I can do is use the differentiation theorem for Laplace transforms described here:

Is this what they did? If so, what is the type of substitution they did for $s$ here? I have been told about the Euler and Tustin method in another thread. What is this?

Also what is meant by the extra $z^{-1}$ at the end of (13b)? I was told multiplying by $z^{-1}$ means you just delay the whole equation by 1 sample. Is that what they're referring to to solve the problem they describe at the end?

Lastly, how would you rewrite/adapt these equations to accommodate an initial velocity for the mass component? ie. An excitation impulse velocity at time 0, ie. v0?

I have this example for a simple mass with v0 as the initial velocity:

But I'm not exactly sure how that really works. I mean, you end up with:

How would you go one step further to describe $a(s)$ in terms of $y(s)$ while still maintaining the $v0$ parameter in there?

Thanks for any guidance.

Browse other questions tagged audio z-transform laplace-transform or ask your own question.

3
Am I handling offline FFT correctly?
0
what is the name of this curve
1
What is the inverse Z transform of this:
1
What are the steps for applying a 50% Overlap to an FFT?
4
From MFCC to Machine learning. What are the steps?
0
How to find $h[n]$ system response of this equation?
2
How do I convert this simple Laplace equation to Z-domain?
0
What type of z transform is this?
0
Why does the solution for the voltage of this RLC circuit result in a maximum capacitor value?