Are all images 2d or also we have 3d images? [closed]

Are all the images that we encounter/use in image processing are 2D or do we also have 3D images? If also 3D, then Video will be treated as a 2D image or 3D image?

The term image derive from Latin imago. I fully agree with wikipedia saying that it denotes an artifact

that depicts visual perception [...] that resembles a subject—usually a physical object—and thus provides a depiction of it.

As such, it is a representation of some reality, combining spatial "ordinal" cooordinates (with some natural order, in 2D and 3D for us humans) and "cardinal" coordinates (luminance/chrominance values, spectra, categories).

The dimension attributed to images to signal/processing people is generally the one of the "ordinal" cooordinates (2D or 3D). To other practitioners who plot 2D images as 3D plots (using elevation for scalar fields in the "cardinal" dimension, non-image-processing people often call 2D image "tridimensional" (bottom-right "Arnold Schwarzenegger" in Terminator), because they look at this artifact in our natural 3D world: 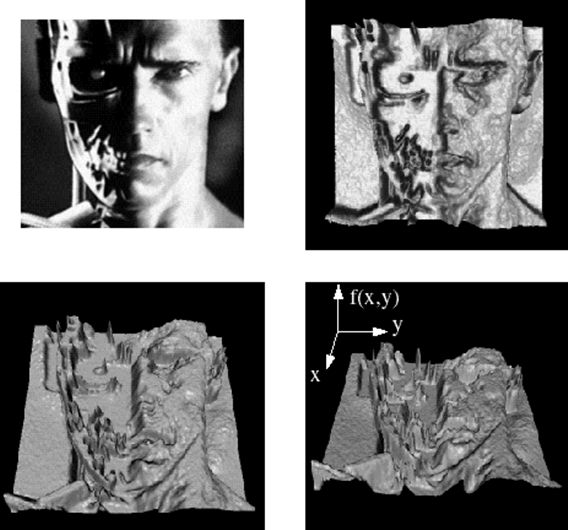 Here, $x$ and $y$ are the ordinal dimensions, $f(x,y)$ makes the third. This visualization of images in the resulting topological/topographic map is exploited for instance in the field called "mathematical morphology", where surfaces and regions are interpreted as geographical objects: valleys, mountains, watersheds, erosions, etc.

If you add (a 1D) time (a very ordinal dimension so far) for motion, then you can add another dimension: standard 2D+t video, 3D video, etc.

If we call for scale-space theory, where one bluntly considers that "objects are meaningful over a certain range of scales only", one can smooth a given image with smoothing kernels to get different images: 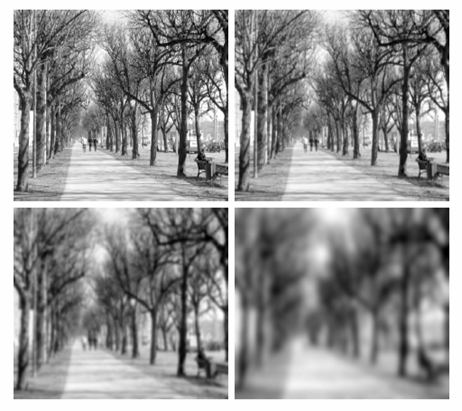 and pile them up to yield an additional "scale" dimension. Then, you can extend the discussion to images at arbitrary coordinates, like point clouds, with motion, etc.

Finally, I believe that image data (and their dimensions) can be considered as at least three objects:

and their inherent dimension depends on that. Remember however that one can map two continuous spaces of different dimensions, albeit in a non continuous manner. For discrete spaces, like the ones for classical image/volume coordinates, mappings exist, like zigzag of Hilbert/Peano curves for image compression (JPEG, J2K), so dimensions are a matter of data structuration.

As Axel Mancino said, there are examples of true 3D images (ie that where measured by a real 3D process and are not merely 2D images stacked on each other). So you have three spatial directions and must treat the images accordingly. Very often it is not possible to treat 3D data sets as stacked 2D images and process all "slices" by 2D algorithms. Two examples:

1) Imagine a skelitonization of a 3D data set: You might lose connections between the skeleton paths from slice to slice, if you only process the slices with 2D algorithms. It does also not help to do this approach three times (ie going through the 3D volume once from each side and treating the 2D slices individually).

2) Determining the fractal dimension of an image. You cannot do simple box-counting for each slice, since you neglect the roughness of the third dimension.

In MRI, there are also many more possibilities. As in CT you can easily have 4D images (3 spatial directions, 1 time direction), or even higher dimensions, including

Moreover, you can also have volumetric videos, which are in fact 4D images. This might be the case of an ultrasound video acquisition (https://www.youtube.com/watch?v=OBV7i9zRAto)

2
Are there any good “conceptual distances” for comparing two images?
0
What is the standard way to handle images of different sizes for classification?
5
How can I perform object tracking using noisy images?
4
Matching masked images
1
Feature for exact matching of images
1
Measuring similarity between two images
3
Effect of Resizing (Up Scaling) an Image on the Ability to Detect / Recognize Objects
1
Making images taken under daylight conditions appear as if they were taken at night using image processing elementary techniques
0
Detect lines transitioning to blobs in images