I am trying to compute a compression filter function to minimize the error from a a desired pulse compression result.

The usual approach to doing this is to minimize the RMS error of the the compressed signal while it's represented in linear terms (i.e., in volts). This method handles complex signals and pulse compression for my nonlinear FM signal, and appears to work as advertised. (The method is described in the end notes of this question.)

While the method minimizes the RMS error, it leaves some individual samples larger than I'd like them to be, while producing some that are much lower than they need to be. What I'd like is a time sidelobe response that is more uniform in the time domain. Something like the sidelobes of a Chebyshev Type II filter function is what I'm looking for, but two-sided and in the time domain, not the frequency domain: 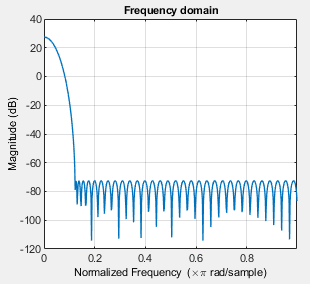 This would be much more useful for my purpose (which is for a radar application).

My first thought is to perform the RMS calculations in decibels, rather than as linear values. If I could do that, the same optimization function can be used to solve the liner equations for minimizing the error. It may work or it might not, but that's all I can think of at the moment. One problem is that I don't know how I would handle the complex signals and the complex compression function if I do this in decibels. So I'm stuck at the moment.

Can someone give my some guidelines or a solution to achieve what I'm looking for?

Here is the general method for minimizing the RMS error:

FOLLOW UP Not sure if this is the best place to put this, but the recommendation from Matt L. to use iterative reweighted least squares did produce some improvement.

And here is an example of the result for a specific case, using the matched filter, the first iteration, and the 50th iteration. What I see is great improvement in the lobes I wanted to reduce. But I had hoped it would level out the sidelobes to something more even. A few more iterations led to a singular matrix problem, so I didn't go any further. 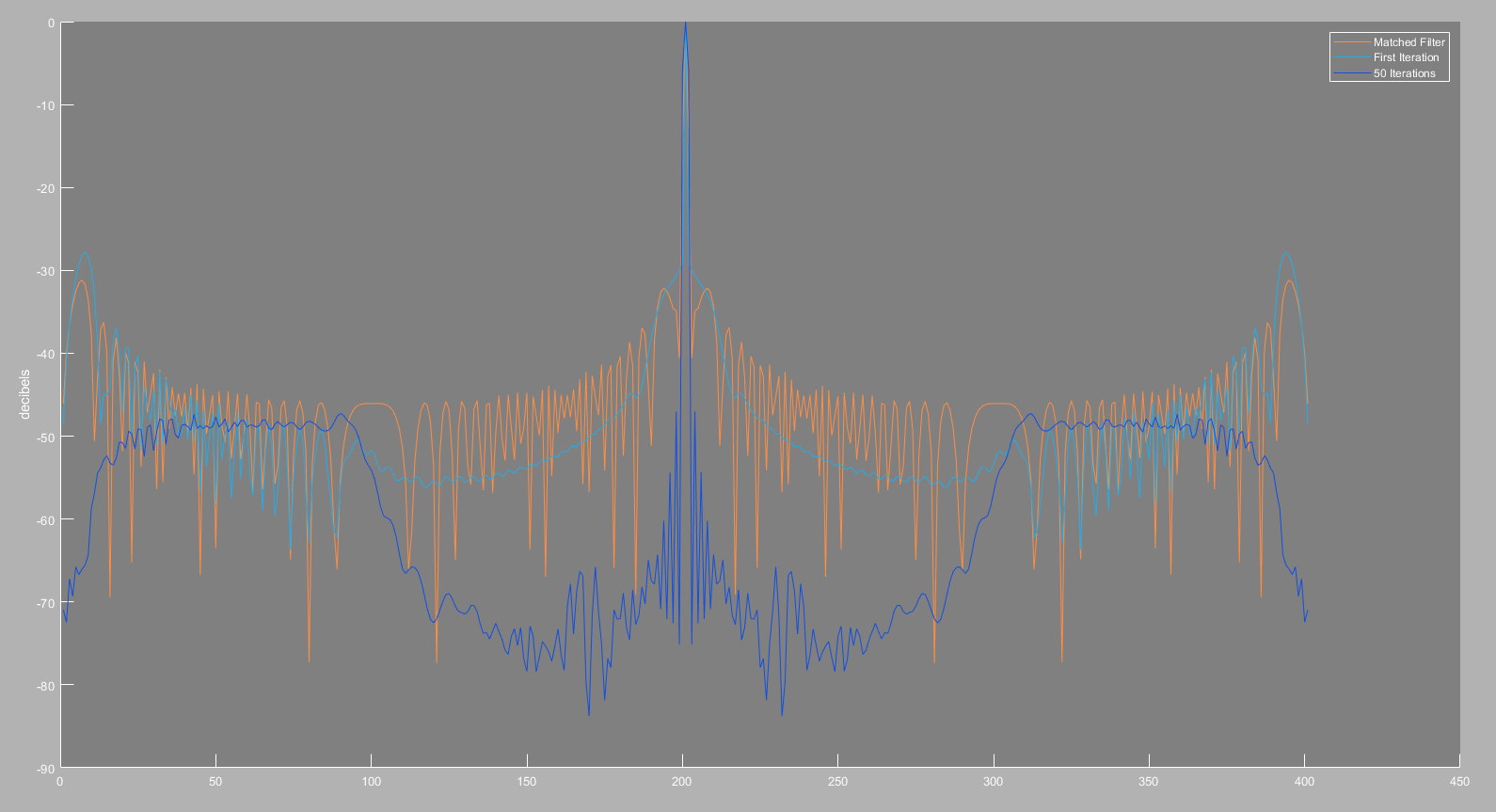 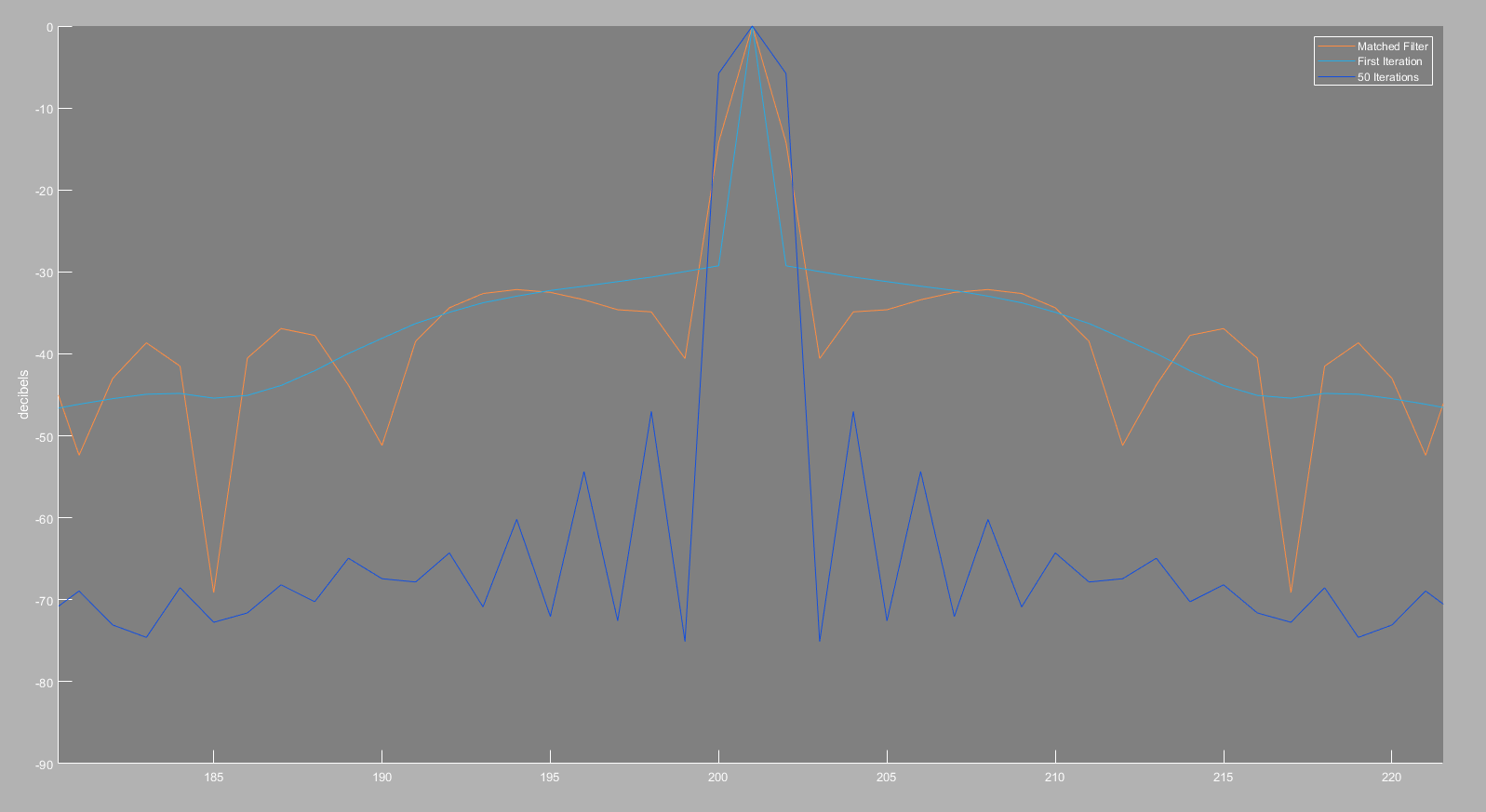 You could define a weight sequence $w(n)$ that weighs the error differently for different time indices $n$:

Samples that are too large get a higher weight, whereas samples that are smaller than necessary can get a lower weight. Of course, you cannot know in advance which samples should get which weight, so you need to iteratively solve the RMS problem minimizing $(1)$, and adapt the weight sequence $w(n)$ in each iteration depending on the magnitude of the error $e(n)=d(n)-z(n)$.

A possible update rule for the weights $w(n)$ is

where $k$ is the iteration index. You probably need to experiment a bit with the update equation to adapt it to your desired result, but the general idea is to increase the weight where the resulting error is too large and decrease it where it is smaller than needed.

This type of algorithm is called iteratively reweighted least squares.

Not the answer you're looking for? Browse other questions tagged optimization radar pulse optimal-filter or ask your own question.