I've been developing a music player for Android for many years, and I've recently started working on the implementation of a parametric equalizer.

I'm having trouble preventing a gain at one band from adversely affecting the gain at a neighbouring band, resulting in a peak gain higher than desired, which ultimately may result in clipping.

The equalizer effectively acts as a graphic eq - I've fixed the center frequencies and bandwidths to specific values:

(Values in Hz, Bandwidth in brackets)

The plan is to allow a maximum boost/cut of 12dB, with bandwidth gain set to 3dB below peak. Ideally, I could first apply a 12dB cut across the entire spectrum, so that a peak boost of 12dB is guaranteed not to cause any clipping.

The problem is, if a user applies a boost of 12dB at, say, center frequencies 63Hz and 125Hz, the peak gain at both frequencies ends up being more than 12dB, which may result in clipping. Here's what the FFT looks like for that case: 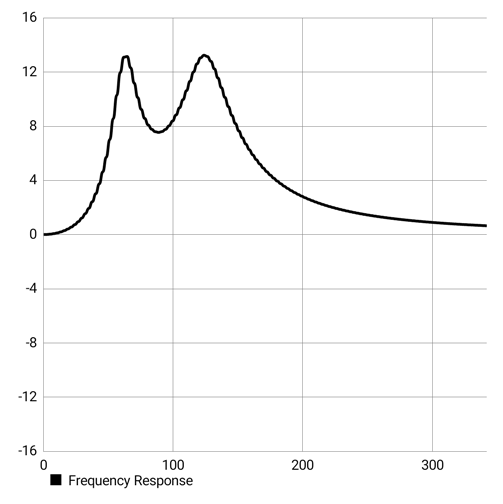 Notice the peak gain is actually greater than 12dB.

The effect is compounded if a boost is applied across all the frequencies mentioned above (this is the worst case scenario): 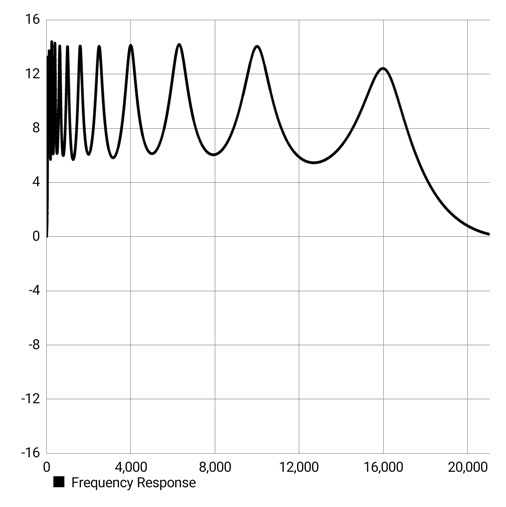 Maybe I should expect this, and the answer is simply that bands shouldn't be spaced too closely if applying a lot of gain. But, my problem is I'm trying to provide this functionality to a casual music listener, but I don't want them to configure the equalizer in such a way that clipping occurs, as they'll likely claim that it's faulty.

So my questions are - does this look like a correct implementation of a parametric eq? Does it make sense that neighbouring bands can have a greater peak gain than the specified 'boost gain'? How can I prevent a user from causing clipping in this situation?

Any help is appreciated.

There's no universally acclaimed correct design of equalizers. Just like there are multiple car designs per brand, there are also multiple techniques for achieving desired effects.

It's true that your channel filters will interact with each other and change the effective resulting gain at each frequency, but mostly pronounced at the adjacent channel peak though.

The amount of interaction depends on your selected DC gains (which are unity for your application) and channel bandwidths and bandwidth gains.

There are recommended practices to prevent distortion levels. Headrooms are included so that peak gains will not create clipping. Or you can allow some...?

Robert Bristow Johnson is a member here and he's one of the designers of those (cookbook) parametric equalizers that you want to use in your application.

This looks like a graphic equalizer to me, not parametric, because the filter parameters are fixed. Changing your terminology might give you better results from a search engine.

It also looks like you are running your filters in series, which would make sense for a true parametric EQ. Something I’ve done in the past is run parallel filters and sum them together for graphic EQ. As I recall, this allowed for the filters to ‘interfere’ with each other such that the overall gain didn’t overshoot, but it wasn’t perfect. Basically, you would run your signal through a bunch of bandpass filters, scale the outputs by a level control and sum them all with the original signal. If your scaling factor for a band is positive it will boost that band, negative will cut and zero will leave it unchanged.

There are a lot of different ways to solve this problem, and the ‘secret sauce’ will be what differentiates your implementation from someone else’s. The most I think you could hope for on this forum is some new ideas to try, which hopefully I’ve provided. Cheers.

kinda funny, i have never seen this post/question before and i was named in a comment, but because it wasn't quite spelled right, SE never notified me.

using cascaded biquad parametric EQs to accomplish a general graphic EQ is something that some authors have published about. and it comes after my 1994 paper on EQ and the Orfanidis paper cited.

Anyway, if you define bandwidth of a parametric EQ (or "peaking EQ" as in the Cookbook) the way i do, then it is approximately true that a boost of N dB will look nearly the same as twice the boost of N/2 dB. That's because the two curves are equal at the bottom of the "skirt", at the peak frequency, and at the two midpoint gain frequencies.

So then you can kinda turn this into a solution to a set of linear equations.

Check out these two papers:

i don't have time now to go over the details. but see if you can figure out the papers.

Not the answer you're looking for? Browse other questions tagged equalizer parametric-eq or ask your own question.