The Digital to Analog (DAC) can make frequencies upto 500 KHz.

500 kHz to 1 MHz is an alias? Or is it called a mirror?? Is aliasing a concept only on the ADC and sampling process.

Does -500 to 0 exist as an alias or mirror too... But surely a DAC can't make negative frequencies? Texas Instruments tutorial on DAC has the attached screen shot showing a DAC outputting a negative frequency.

Is anything different for a DAC with complex samples such as on an ADC complex sampling allows frequencies upto Fs instead of Fs/2...!

Block diagram in this link

I think you are confused by negative frequencies and what they mean so let me add this explanation.

When you see a spectrum that contains "positive" and "negative" frequencies, each of the frequencies are of the form:

Consider Euler's identity for a cosine that demonstrates the concept of negative frequencies well:

Here we get two phasors on the complex plane, one rotating clockwise, one counter-clockwise, and adding the two results in a signal that always stays on the real axis going back and forth sinusoidally. 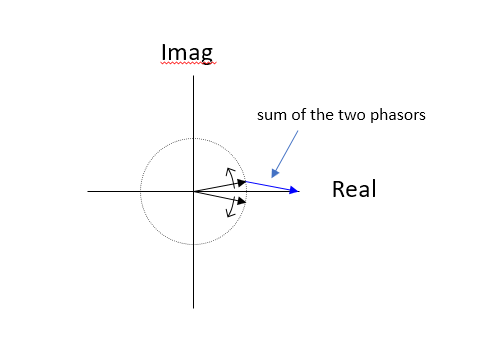 In order to IMPLEMENT a signal that does not have a spectrum with this property (positive and negative frequencies not complex conjugate symmetric), you would need to have TWO values in implementation, one to represent the real number and one to represent the imaginary number (or you could do magnitude and phase, either way you need two signals). You see this in the baseband part of your diagram where the real is represented as "I" for "in-phase" and the imaginary is represented as "Q" for quadrature. So in that part of your diagram we are indeed representing a complex signal, and the spectrum at that point can be asymmetric.

I notated your diagram to demonstrate this further. I will call the IQ signal the "baseband signal" and because it is indeed complex, it's spectrum can be assymetric as I have drawn. This complex baseband signal is then digitally upconverted (frequency translated) by multiplying it by $e^{-j\omega t}$ since $e^{-j\omega t} = cos(\omega t)-jsin(\omega t)$ and then taking the real part:

Taking the real part of this results in the form in your block diagram prior to the DAC:

So the signal where we maintain two datapaths (truly a complex signal) will have an asymmetric spectrum while the signal where this is only one datapath must be real and therefore must have a spectrum that is complex conjugate symmetric. I like this diagram as shown as it clarifies that the first signal I circled is indeed complex and has an asymmetric spectrum, while the second one I circled, while it looks like the spectrum is asymmetric if you just considered the positive frequencies alone, is not as we are referring to symmetry between the positive and negative frequency axis.

So we see how negative frequencies exist throughout the entire block diagram, and it is not that the DAC is creating them. The baseband I and Q signal coping out of the encoder is complex and has an assymetric spectrum, this gets digitally upconverted (and is still complex until summed), the output of the summer is now one signal path so must be real and therefore now has a symmetric (complex conjugate) spectrum. The DAC will convert this to the analog domain and the bandpass filter will filter out the images of the DAC (positive and negative--it is a real filter so it too is complex conjugate symmetric in its passband). So assuming the BPF is centered on $f_{IF}$, the analog spectrum would look identical to the spectrum prior to the DAC, extend to $\pm \infty$ while the unique DAC input spectrum extends only to $\pm f_s/2$.

The "image" shown in the diagram are NOT the images due to digital sampling, but the image due to the analog upconversion. This is a real multiplier and as such its output will contain the sum and the difference of the input (review the expansion of $cos(\alpha)cos(\beta)$ to see this), so we get the terms RF+IF and RF-IF at both postiive and negative frequency locations. (However you can also see that we are just frequency translating the same spectrum at the output of the BPF by convolving it with the two frequencies of the RF sinusoid.) 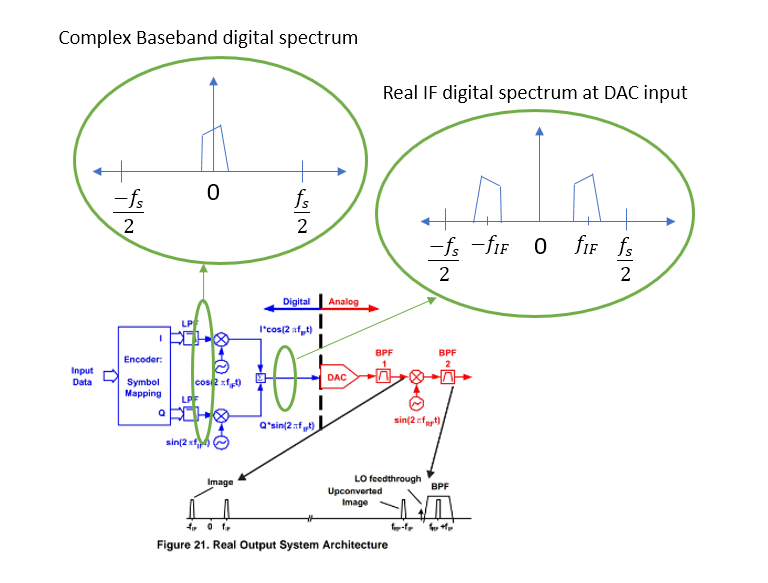 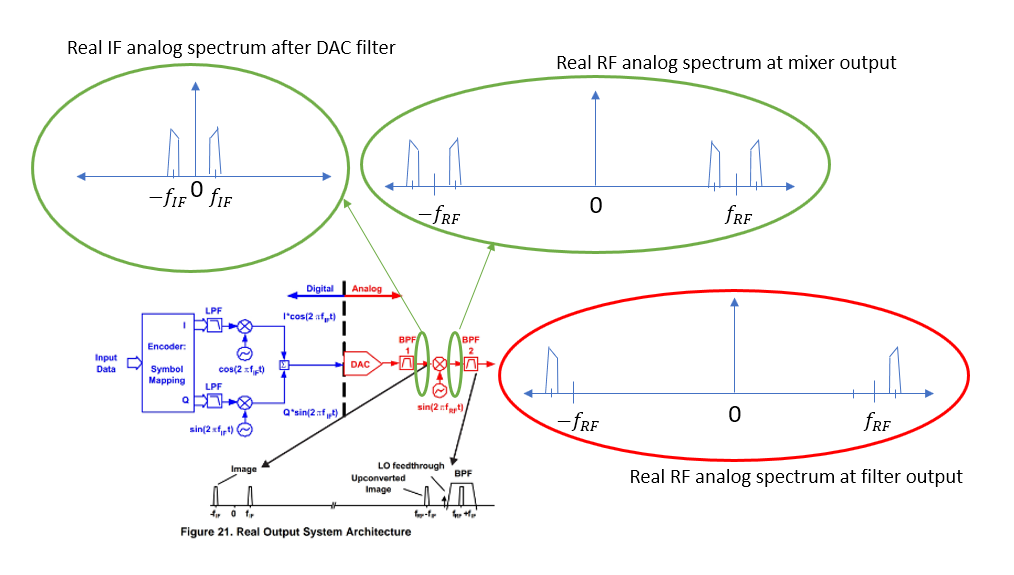 There is more not detailed about the DAC upconversion that I didn't cover but you should be aware of including the option to pass a higher Nyquist zone by setting the bandpass filter on one of the DAC images, and that the DAC itself will introduce a Sinc roll--off in frequency due to the staircase reconstruction.

Yes you are right.

Aliasing only happens when you sample (either analog to digital conversion or during digital downsampling) a signal and refers to the overlap of signal spectrum due to an inadequate sampling rate; sampling rate below the Nyquist rate.

Aliasing cannot happen at the output of a DAC (digital to analog converter). What happens is, if you do not use a proper lowpass reconstruction (or interpolation) filter at the output of the DAC, then you will have images of the original signal spectrum repeating at multiples of DAC output frqeuencies, 1 MHz in your case. These are called image spectrums and they do not overlapp, but just create imaging distortion at the output signal, if not properly filtered out.

Keep in mind that digitized signals always contain images of the original analog signal's spectrum, modulated around multiples of the sample rate.

So, if you want to consider the negative frequency spectrum, consider that when you convert back to analog, -100 Hz and 100 Hz would both be reproduced, each carrying half the amplitude, in phase, and summing to the expected amplitude. But in most cases, except maybe mathematical derivations, we just ignore the negative spectrum.

(You might ask "what about phase? Could positive and negative cancel?"—but that would be a different question. The short answer is they are always in phase like a cosine wave that is symmetrical around zero.)

Not the answer you're looking for? Browse other questions tagged sampling aliasing digital-to-analog or ask your own question.

12
Can we have a Digital Anti Aliasing filter?
0
Simple analog anti aliasing filter good enough if signal frequency is far from sampling frequency ? What about equivalent time sampling?
3
Why analog anti aliasing filter is used before analog to digital converter when there is already a digital filter after ADC?
0
Frequency of a single sample in a digital signal and aliasing
-1
confusion between frequency and amplitude in digital to analog and vice versa conversion
1
IQ Sampling and Oversampling Differences? *Confused*
0
Does Sampling frequency come into picture in Samples generation for DAC to generate sinewave (analog signal with particular frequency & amplitude)?