Definition of Perfect Code (and example of Hamming Code)

Now let's consider the Hamming Code (7,4): here the generator matrix G (such that C = B*G, by referring on the upper blocks scheme) is shown: 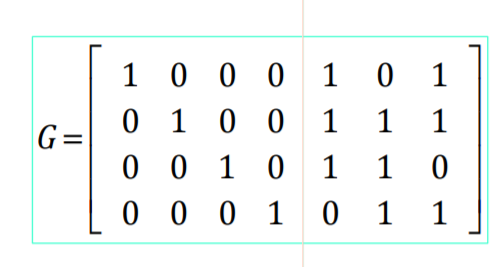 Second question: I do not understand these two sentences. The rows of G do not appear to be one bit distant from a codeword and the second sentence is completely obscure for me. Can you explain me them?

I give an explanation that avoids the pejorative comments of Engineer.

First question: can you explain me these two definitions of perfect code?

Those are not two definitions of perfect codes but rather a single somewhat poorly-phrased definition of a perfect code. It should read

A perfect (binary) $t$-error-correcting code of block length $n$ is a set $\mathcal C$ of binary vectors of length $n$ that enjoys both properties listed below:

It is important to bear in mind that both properties must hold in order for $\mathcal C$ to be called perfect.

Second question: I do not understand these two sentences.

The first sentence uses the fact that the $[7,4]$ Hamming code is a $1$-error-correcting perfect code and since every binary vector $\mathbf x$ must belong to a Hamming ball of radius $1$ centered on a codeword, it must either be a codeword (the center of the ball) or be one of the $n$ binary vectors at distance $1$ from the codeword at the center. In binary $n$-space, a Hamming ball of radius $1$ has exactly $\binom{n}{0}+\binom{n}{1} = n+1$ binary vectors in it.

The second sentence points out an addendum to the unstated notion that if $\mathbf c$ is the transmitted codeword and if the channel makes at most one error (flips no more than one of the transmitted bits), then the maximum-likelihood decoding algorithm, which maps received vectors into the nearest codeword, will decode correctly. The received vector $\mathbf x$ is at distance $0$ (no flips) or distance $1$ (exactly one flip) from $\mathbf c$ and so is in the Hamming ball of radius $1$ centered ar $\mathbf c$. The addendum, which is stated more explicitly, is that if two errors have occurred, then the received $\mathbf x$ lies in a Hamming ball centered at some other codeword $\mathbf c^\prime$ and so will get decoded into $\mathbf c^\prime \neq \mathbf c$ by the maximum-likelihood decoding algorithm, resulting in decoding error. Left unsaid (since these are presumably not things that are dreamt of in the book author's philosophy) are the facts that decoding errors will also occur if the channel makes three, four, five, six, or seven errors.

First question: The perfect code definition is just what you wrote down, it is just a definition. But don't let it fool you, a perfect code is not always a good code. For example, no coding at all is a "perfect code" for $t=0$, and actually the $(7, 4)$ Hamming code is a perfect code but not all that great.

A bit pattern is just a pattern of bits. For $n$ bits, there are $2^n$ possible bit patterns.

Second question: "The rows of $G$ do not appear to be one bit distant from a codeword..." That is not what it says! It says that each of the possible $2^7$ seven bit patterns are either a codeword or, at most, 1 bit away from being a codeword. It is subtle difference and can see how you're confused.

The second sentence is explaining the error correction capability. Since every length $7$ bit pattern is either a codeword or within one bit of a codeword, this code can detect and correct up to one bit error. But what if there is $2$ bit errors? Well, the first bit error is fine and can be detected and corrected, but the second bit error now puts the received $7$ bit pattern "closer" to a different codeword and there is an error! Look into "sphere packing" as a way to visualize this notion better, it is very helpful. Hope this helps!

Not the answer you're looking for? Browse other questions tagged digital-communications channelcoding information-theory coding code-generator or ask your own question.