I am building a whiteboard to track the position of its pen. I have n ultrasound receivers placed on the periphery of the whiteboard, and an ultrasound emitter in the pen. The pen emits pulses the receivers detect. A microprocessor gathers the arrival times of the pulses for each receiver, and with the time differences of arrival (TDOA) it makes an estimate of the position of the pen following a multilateration algorithm.

Ultrasounds reflect on surfaces, which can cause interference. This is a restriction on the frequency of the pulses. At the moment, I pulse the pen at 10Hz, which is enough for the reflections to die off and not interfere. Unfortunately, 10Hz is not fast enough a sampling for my purposes. Ideally the pen would pulse at 100Hz. (The pen emitter is connected to a microcontroller, so I can control the shape and frequency of the pulse.)

What tricks can I use to tackle the reflection issue? What are some standard filtering techniques? Could using different pulse patterns in a cycle help filter out the reflections?

It would appear that your problem lends itself very nicely to using a CDMA scheme.

Let starts with some properties of (DSSS) CDMA. (Direct Sequence Spread Spectrum, Code-Division Multiple Access). Its a mouthful, but it is really easy to implement.

In CDMA, your pulse (at baseband) is actually made up of many concatenated 'chips' as they are called. The chips are just 1s or -1s, of a fixed duration. For example, your chipping sequence might be [1 -1 1 -1 -1 -1 1]. You would use this chipping sequence to modulate your carrier.

However, you cannot just make up your chipping code. What you want to do is use chipping codes that have the very nice property, that their autocorrelation function is a delta function like so: 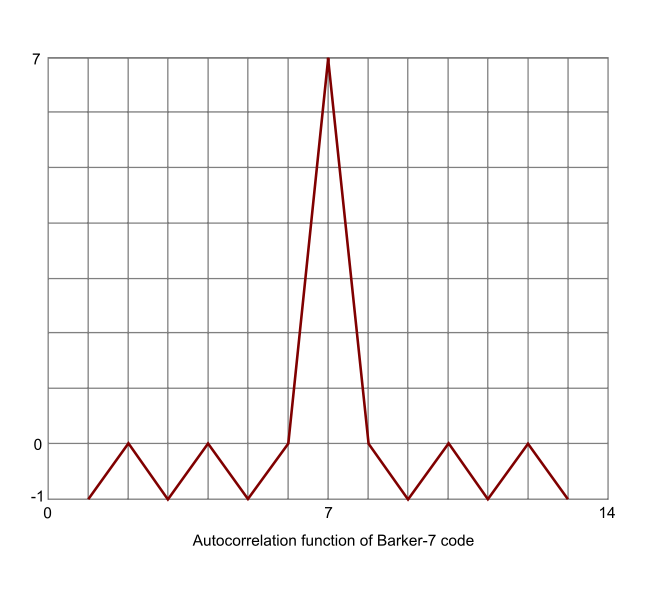 (Equivalently, their power spectral density is white). For example, you can look into using Barker Sequences as your chipping code, (usually used in radar), or you can also look at using Gold Codes. Practically speaking however, this means that you get the maximum correlation score in your receiver, ONLY when the receivers' code, exactly lines up with the transmitted code, and zero otherwise.

How does this help you? In your receiver, you would be running a correlator continuously. The correlator would be performing a running dot-product of its own local code, with whatever is received. Now imagine that you receive a transmitted waveform from your pen, and a second waveform from a reflection. As your receivers' correlator runs, it will give a peak when its own codeword exactly alligns with your code from the pen. This will cause your detector to 'lock' onto that specific delay value. Now, here is where you reap the benefits of a near-delta autocorrelation function of your code: The reflected signal will also be present, and will also have its dot product taken with the receivers' locked code, but it will give zero, or near zero score, since it is orthoginal or near-orthogonal to the delayed code that your receiver has already locked onto.

In contrast, if you had send out a un-coded carrier pulse, you would be at the mercy of constructive or destructive interference throwing off when exactly your pulse peaked at the detector level of your receiver, and thus get erroneous TDOAs.

Not the answer you're looking for? Browse other questions tagged filters frequency-spectrum frequency or ask your own question.

12
How to make frequency axis for even and odd FFT length?
3
Remove a frequency and all its multiple (harmonics)
1
Frequency of a noisy signal with fixed width pulses
0
Problems filtering image with prewitt
0
Resolving two nanosecond pulses with filter
0
Compute time constant of discrete exponential decay pulses
0
The selection of the amplitude of the signal, consisting of rectangular pulses, at different frequencies