how a signal for which calculate RMS can be filtered and have a fast settling time?

i designed a sinusoidal pwm amplifier (3KHz to 20KHz) that regulates its output voltage reading the RMS value of output current.

The RMS is obtained squaring the signal sampled by AD converter @200KHz and then applyng a FIR filter with 120 TAPS.

The advantage of this method is that the settling time of the FIR (so the response to amplitude changing) is about 600us so i can correct the pwm duty every 1ms because the value is alread stable.

All works fine but the problem arises when an external signal is added to the signal the amplifier is generating.

Infact a signal of about 600Hz different from original one (i.e. amplifier generates 4950Hz and a 5550Hz signal is added as external noise) causes an oscllation in RMS measure makes the amplidifer works in wrong way.

Applying a bandpass FIR makes the response of FIR slower. I tried downsampling by a factor of 4 and make a FIR of 1KHz bandwith but the fastest settling time i obtained was about 5ms that is too much because i've to regulate every 1ms.

Have you any idea or advice? Is there any algorithm to cancel unwanted component maintaing fast RMS response?

Thank you . Let me know.

I believe you are running into stability issues in an output power control loop design.

See below a diagram of similar power control loops that I have implemented, where for stability reasons any filtering in the loop is minimized and only done with the loop filter itself which is designed for stability. The noise you are trying to filter gets filtered by the loop bandwidth itself.

The diagram below is very simple to implement (first order type 1 loop), where the accumulation of the derived error sets the loop bandwidth by adjusting K. Make K very small for a long averaging time and better filtering but slower response. 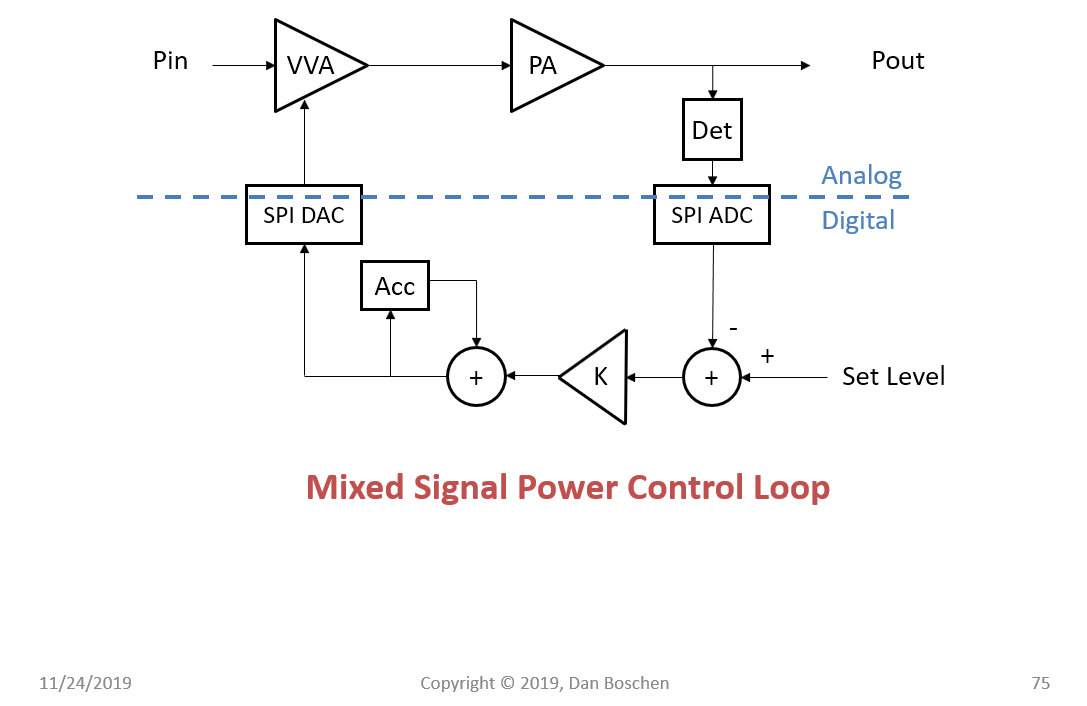 Ultimately if the trade of filtering versus response time with a simple implementation like shown above is insufficient, you can change the loop filter to be a PID loop. This would more complicated and require more understanding of control loop design and a more detailed loop model but give you better performance in noise filtering versus response time. Essentially the accumulator (I) shown above would also be summed with a proportional path (P) and a derivative path (D) all with different gain weights and followed by a second accumulator for a second order type 2 PID loop.

Once a loop model is created, the modeling of the response time and effective filtering is very straightforward with tools such as Matlab, Octave or Python. As an example of the design process, below shows the loop model for the Power Control Loop given by the block diagram above along with the modeled response times versus K: 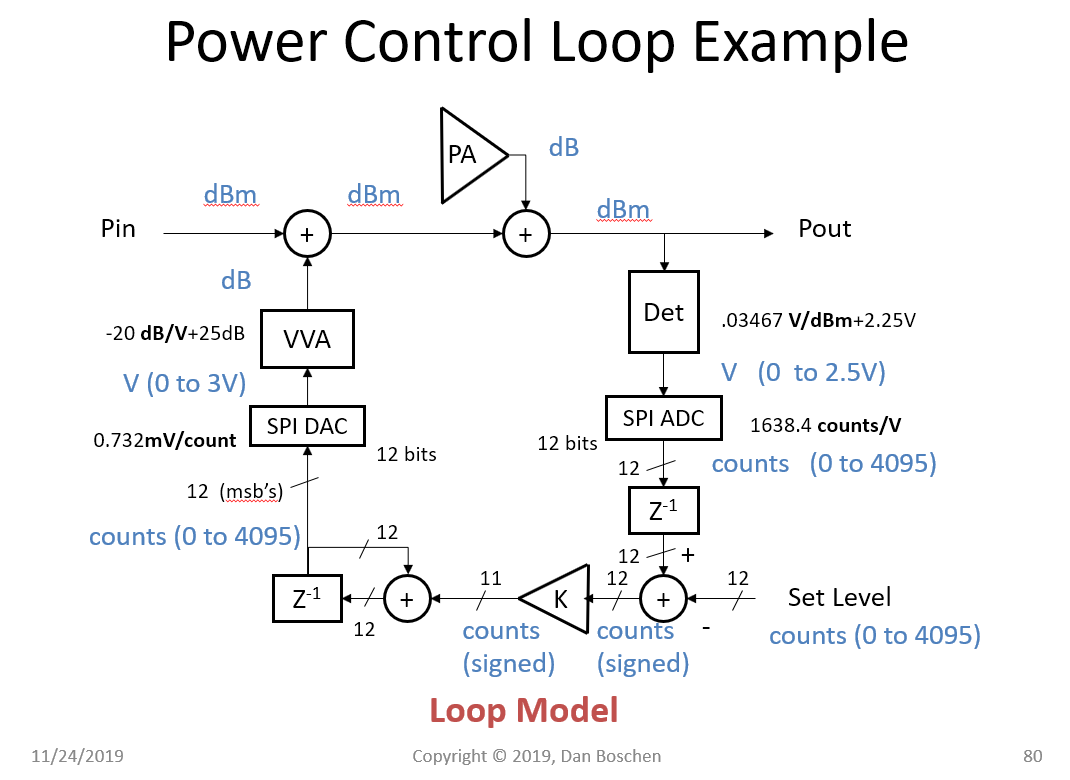 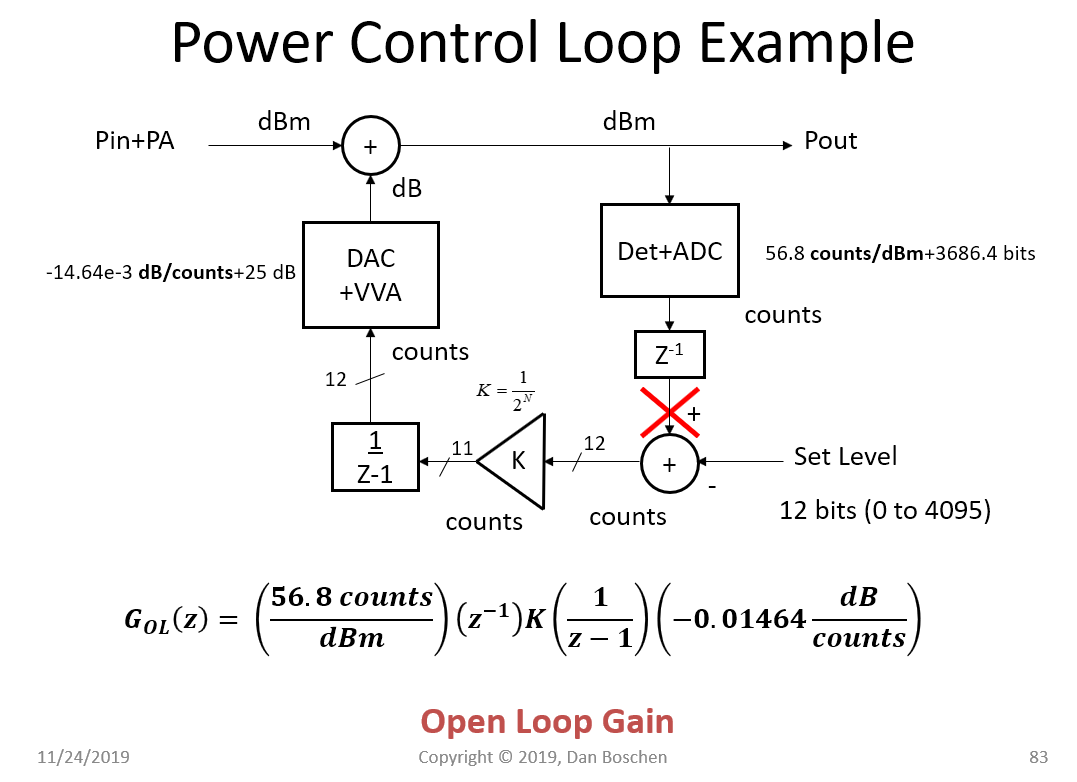 The above case results in an open loop gain given by:

Below demonstrates given the Matlab and Octave code snippets how simple it is once the model is established to create the step response for the loop. Note the overshoot indicative of a higher order loop- this is due to the parasitic $z^{-1}$ in the digital loop implementation, and with a high enough K the loop will be unstable (unlike a true first order type 1 loop). Similarly the noise bandwidth, etc is easily established and optimized. 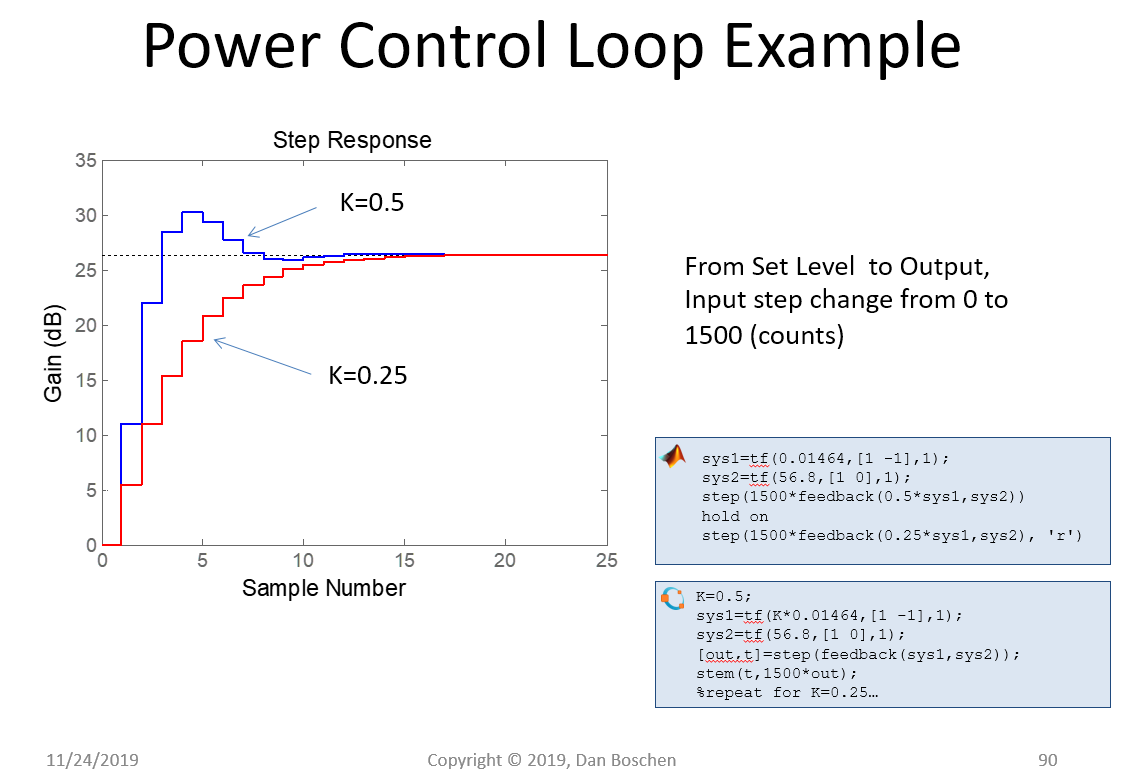 @Ben I try to implement your idea and actually the amplitude of the signal is obtained starting from two components in quadrature.

But when i add an external signal, of the same amplitude, to my input the result is an oscillating signal

How can i reject the noise?

Not the answer you're looking for? Browse other questions tagged filters sampling finite-impulse-response algorithms noise-cancellation or ask your own question.

3
How to calculate signal which is not changed by a filter?
11
How can a filter have zero group delay?
0
signal sampling for 2nd time of sampled signal
1
How can a signal have two maximum frequency components?
1
Introduction to fast algorithms for time–frequency analysis
4
FIR design for arbitrary magnitude and phase: Why can I separate real and imaginary parts like this?
1
Can we have an analogous sampling theorem for quantization?