What kind of FSK signal is this and what demodulation technique can I use to demodulate it. Why is the phase of the 1's changing like that and how does that effect how it needs to be demodulated. I will be programming the demodulation in python.

I am trying to low pass at 900Hz and then generate the envelope but I am not getting the desired result. 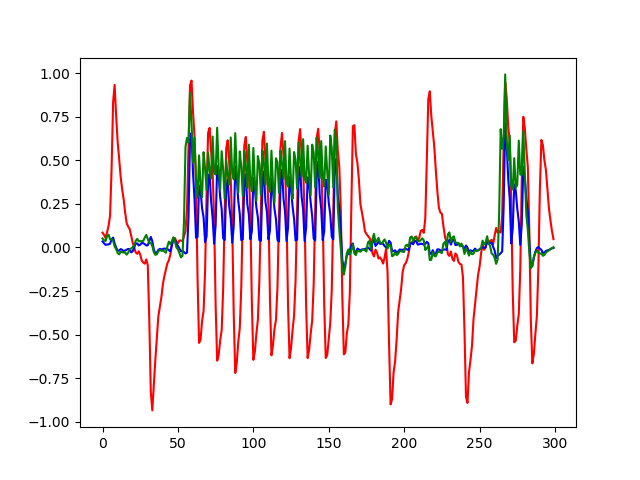 For this specific waveform as described, the following would demodulate the signal from the Frequency Shift Modulated Input into a square wave output:

This works given the duration of the "0" symbol is 12 samples by using a "delay and multiply" frequency discriminator. The multiply will have a strong double frequency component that needs to be filtered out (and can be used for timing recovery if the timing was not synchronous to the symbol rate as further detailed below), and this is done with a simple delay of 3 samples and add, which would provide a null at twice the frequency of the zero symbol. The "1" symbol as shown by the OP is a low frequency symbol in the FSK modulation, and observe how in this case it is approximately formed using the same half cycle of the higher frequency "0" symbol followed by a zero magnitude for a full one and a half cycle duration before continuing with the negative half cycle followed by a zero magnitude for a duration for one and a half cycles (thus it is 4 times the duration of the "1" symbol.) This is convenient as the output for the case of demodulating the "0" symbol would be naturally nulled given the block diagram above without the need for subsequent filtering.

Notice with this approach that at the start of each symbol, if the symbol is a 1 the initial first half cycle result will be a sin^2 always regardless of the next symbol, but if the symbol is a zero the result will be zero throughout the duration of the zero. So in this case with this particular waveform, the way the lower frequency is constructed actually helps for a cleaner demodulation, since it provides the nulled response if the delay is the duration of the zero symbol (Maybe the waveform designer had this in mind which is why it has the peculiar form for the lower frequency).

The "Square Wave" output would be further filtered through an "integrate and dump" process prior to making a final symbol decision: sum over 12 samples in the symbol duration and decide if the result if greater or less than a decision threshold. If greater a "0" was demodulated, and if less a "1" was demodulated. Given the atypical longer duration between the symbols, four "1"'s in a row is the presence of an actual "1" symbol.

The strong double frequency component can be used for symbol timing recovery for the case of the symbols no being coherent to the sample clock. If they are coherent then symbol timing recovery is simply aligning the sample edge to a start of a symbol which can easily done with a simple threshold detection at the Demodulated FSK output as shown in the block diagram (for lower SNR conditions it would be more robust to average the estimated timing position even such a threshold approach was used, such that the timing position does not change abruptly based on the result of any one threshold detection). Once detected, a modulo 12 counter starts, and every time the counter rolls over the symbol is selected at the output. The more robust timing approach would compare the roll-over timing clock and the FSK output threshold detector impulses to establish a timing error (another multiplier would do this), which would then be accumulated in a timing loop to adjust the actual start time of the cyclical timing recovery counter (again only need to do that for a very robust solution in the presence of low SNR, for the waveform as shown all that would not be necessary).

See this link where I detail non-coherent FSK demodulation approaches that further how a delay and multiply forms a frequency discriminator:

With this graphic in mind; a delay multiply is a frequency discriminator: 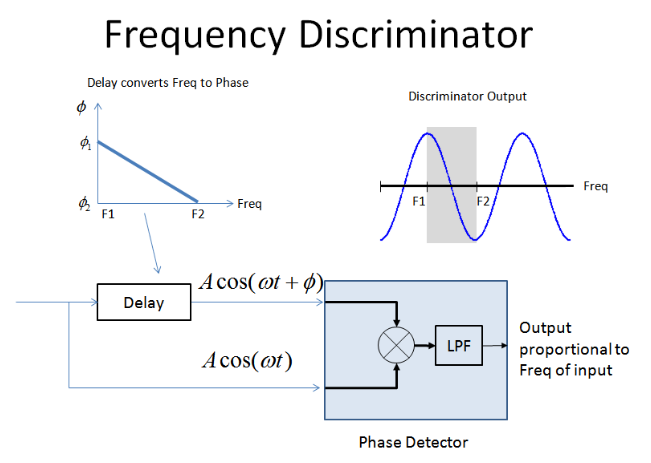 Optional coherent techniques would have a 3 dB SNR advantage but require more processing. This could be done by matched filter correlation to the two symbols (have replicas of the two symbols and multiply and accumulate to each one to decide which symbol is observed). The delay and multiply followed by delay and add is notably simpler.

Not the answer you're looking for? Browse other questions tagged python demodulation scipy fsk or ask your own question.

9
Why does adding a time delayed version of a signal to itself create a filtered signal?
3
How to use a FIR on a signal with a drifting central frequency?