the relationship between bandwidth and the datarate

Why the BPSK signal of bandwidth 2/τ can support a datarate of B/2? and what is the relationship between the bandwidth and the datarate? and why in the QPSK, the rate can be doubled using the same bandwidth? 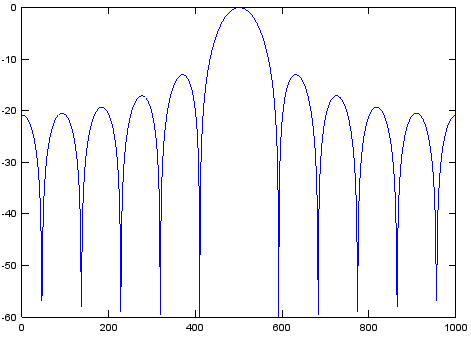 The main lobe is where most of the pulse power is, and the other lobes are called side lobes. Though they do diminish in power the farther out they go, they don't diminish very quickly. The main purpose of pulse shaping is to dramatically reduce the power of those side lobes.

The width of the primary lobe is $\frac{2}{T}$, where $T$ is the rectangular pulse width, which is equivalent to the symbol period. Thus, once pulse shaping is employed, the signal bandwidth is $\frac{2}{T}$.

QPSK transmits two bits per symbol, so the bit rate for QPSK is $\frac{2}{T}$. It follows that QPSK can transmit $2$ bits per Hz of bandwidth at baseband, and $1$ bit per Hz at passband.

QPSK sends two bits per baud, where a baud is defined as one change in state of the signal. The tradeoff is that QPSK requires a better SNR, because it is more difficult to discriminate among 4 states per baud than 2.

Not the answer you're looking for? Browse other questions tagged modulation qpsk or ask your own question.

3
QPSK Data Rate vs Bandwidth at Passband: Why can it only transmit 1 bit per Hz and not 2 bits per Hz?
0
Spectral Effeciency of BPSK

4
Why does OFDM use cyclic-prefix while QPSK uses root-raised cosine filters?
0
High Transmission Power : BPSK or QPSK?
2
Adding AWGN noise with a correct noise power to the signal
1
What is the theoretical bit error rate for QPSK Matlab simulation when constellation points are transmitted (no symbol duration)?
4
What techniques are available for correcting constellation rotation due to phase ambiguity?
3
QPSK Data Rate vs Bandwidth at Passband: Why can it only transmit 1 bit per Hz and not 2 bits per Hz?
0
Relation between constellation SNR and baseband SNR
3
Sample rates, Samples per Symbol, and Digital Pulse Shaping
2
Block diagram of M-PSK modulation and demodulation