I somehow “proved” that given any LTI system, its transfer function has to be constant. What am I missing? 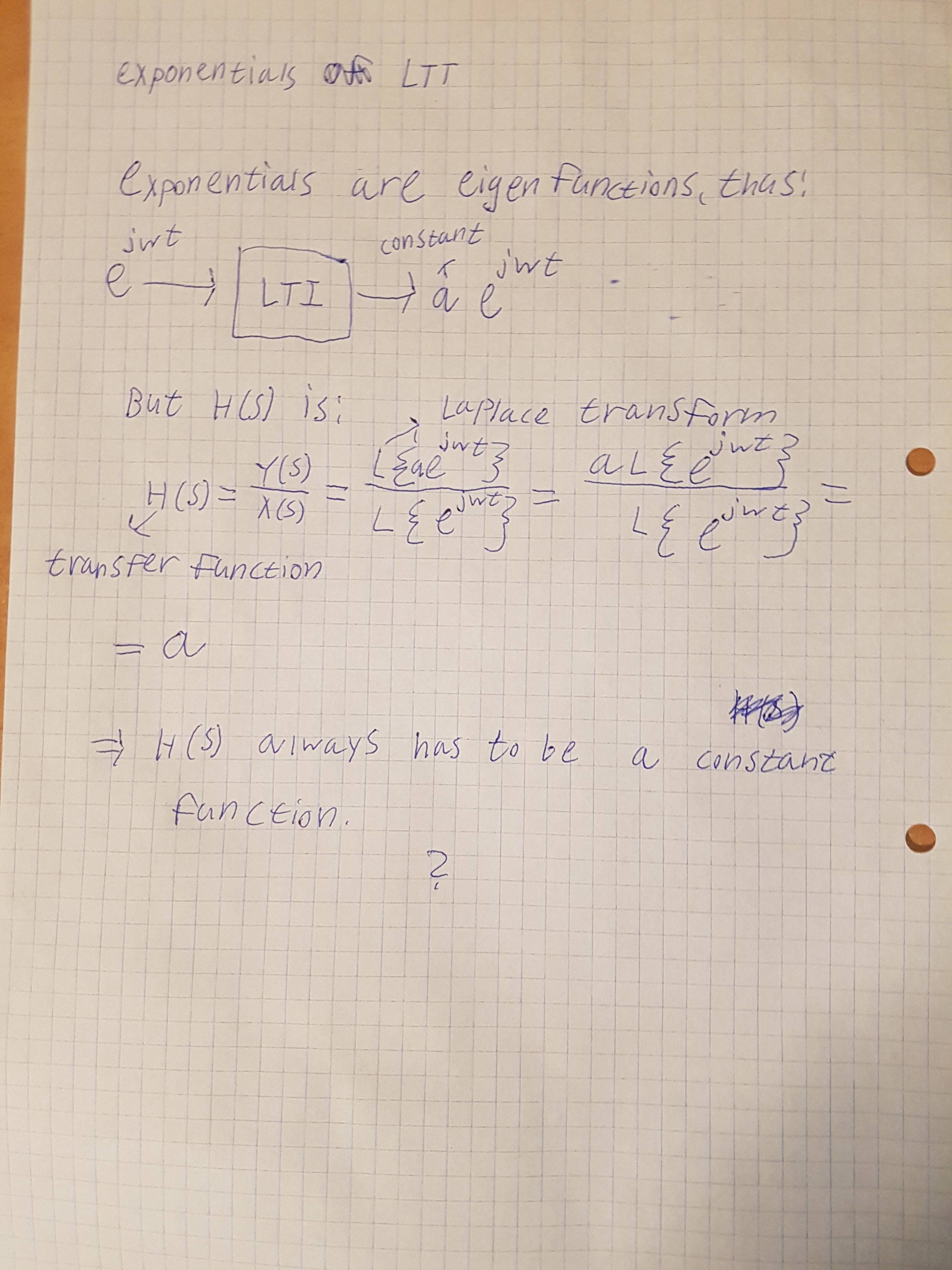 A transfer function is defined as the Laplace transform of the ratio of output to input.

Also, every LTI system has an eigenfunction. Given such eigenfunction as an input, the ratio of the output to input is a constant, which means the transfer function is constant.

You're basically right: the frequency response evaluated at a single frequency point is a complex constant. Note that a better notation for the input signal would have been $x(t)=e^{j\omega_0t}$, emphasizing that $\omega_0$ is just an arbitrary but fixed frequency, and not equal to $\omega$, which is commonly used as the independent variable of the Fourier transform. So the constant you came up with is simply $H(j\omega_0)$.

Apart from that, the main problem in your "proof" is that you can't take the Laplace transform of $e^{j\omega_0t}$ because it doesn't exist. Even taking the Fourier transform - which does exist as a generalized function - doesn't help, because you get a meaningless fraction of two Dirac impulses.

If you use a complex exponential as an input, you can divide in the time-domain in order to find the frequency response at one specific frequency: if $x(t)=e^{j\omega_0t}$, then $y(t)=H(j\omega_0)e^{j\omega_0t}$ and $H(j\omega_0)=y(t)/x(t)$, which is of course a generally complex-valued constant.

When the input to an LTI system is an eigenfunction, then:

where $H(\omega_0)$ is the associated eigenvalue of the LTI system; the transfer function evaluated at the particular frequency:

Here not the transfer function $H(s)$, but just one value of it is found by just one eigenfunction.

Note that the eigenvalue $H(\omega)$ will be a complex-constant for a given particular frequency $\omega_0$. But as the given frequency changes, the constant (in general) will change too. It's just like an ordinary function $f(x)$ treated as a single value for a particular $x = x_0$ but a rather a varying mapping for general $x$ values...

The eigenfunctions $e^{j\omega t}$, depending on parameter $\omega$, have each a specific eigenvalue $a_\omega$ (potentially different). So for any linear operator $\mathcal{L}$ (Laplace included), even formally (not considering existence), you cannot factorize the $a_\omega$ in $\mathcal{L}(\sum a_\omega e^{j\omega t})$ outside the sum, unless all $a_\omega$ are equal.

If they were equal, then you would have a constant transfer function, indeed.

Not the answer you're looking for? Browse other questions tagged linear-systems or ask your own question.