I am trying to modulate an optical signal such that I create a pair of sidebands with arbitrary phase and amplitude with respect to each other. For example I would be like to be able to modulate my carreir signal, centered at 100, to have one of the two resultant spectra after my modulation. 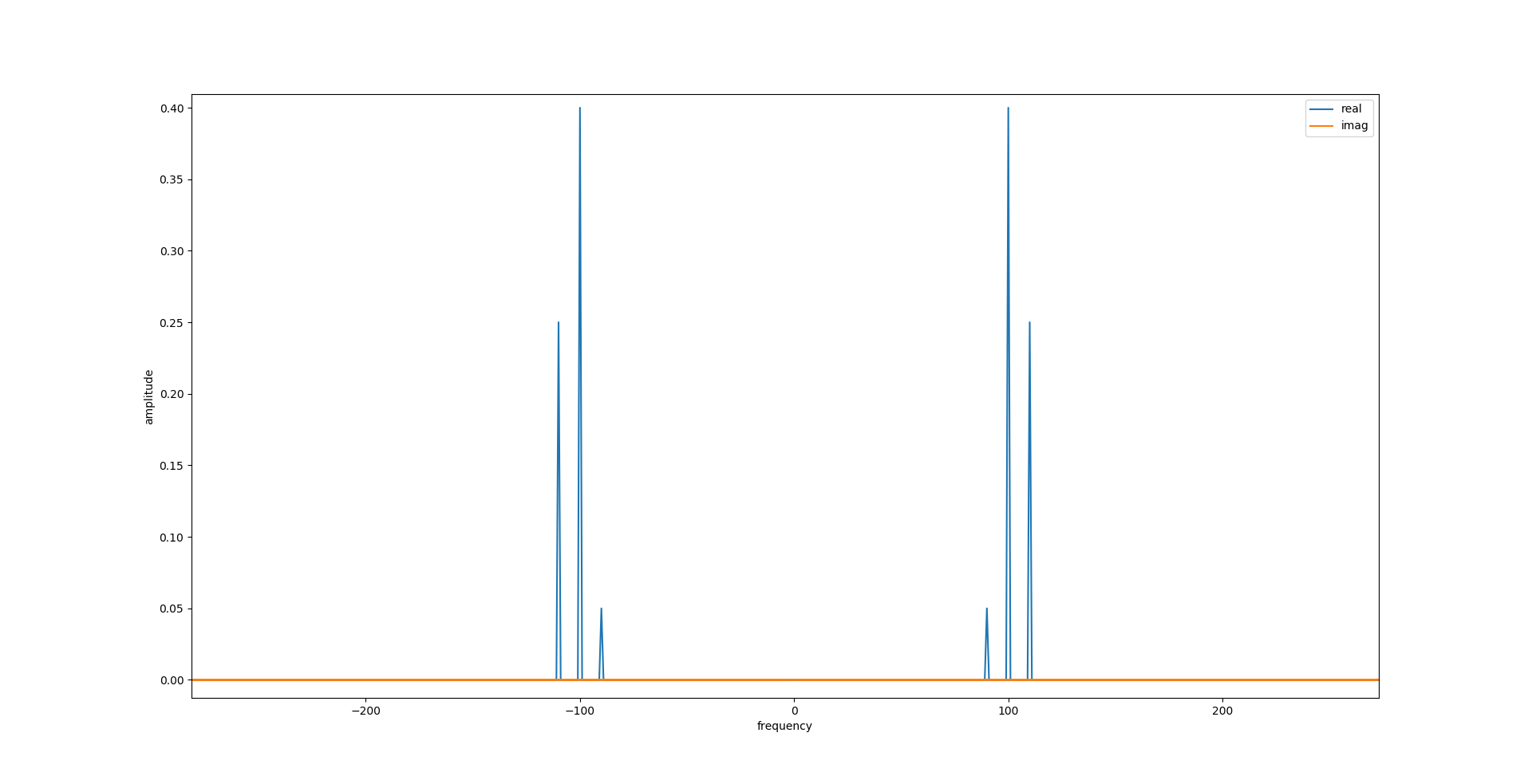 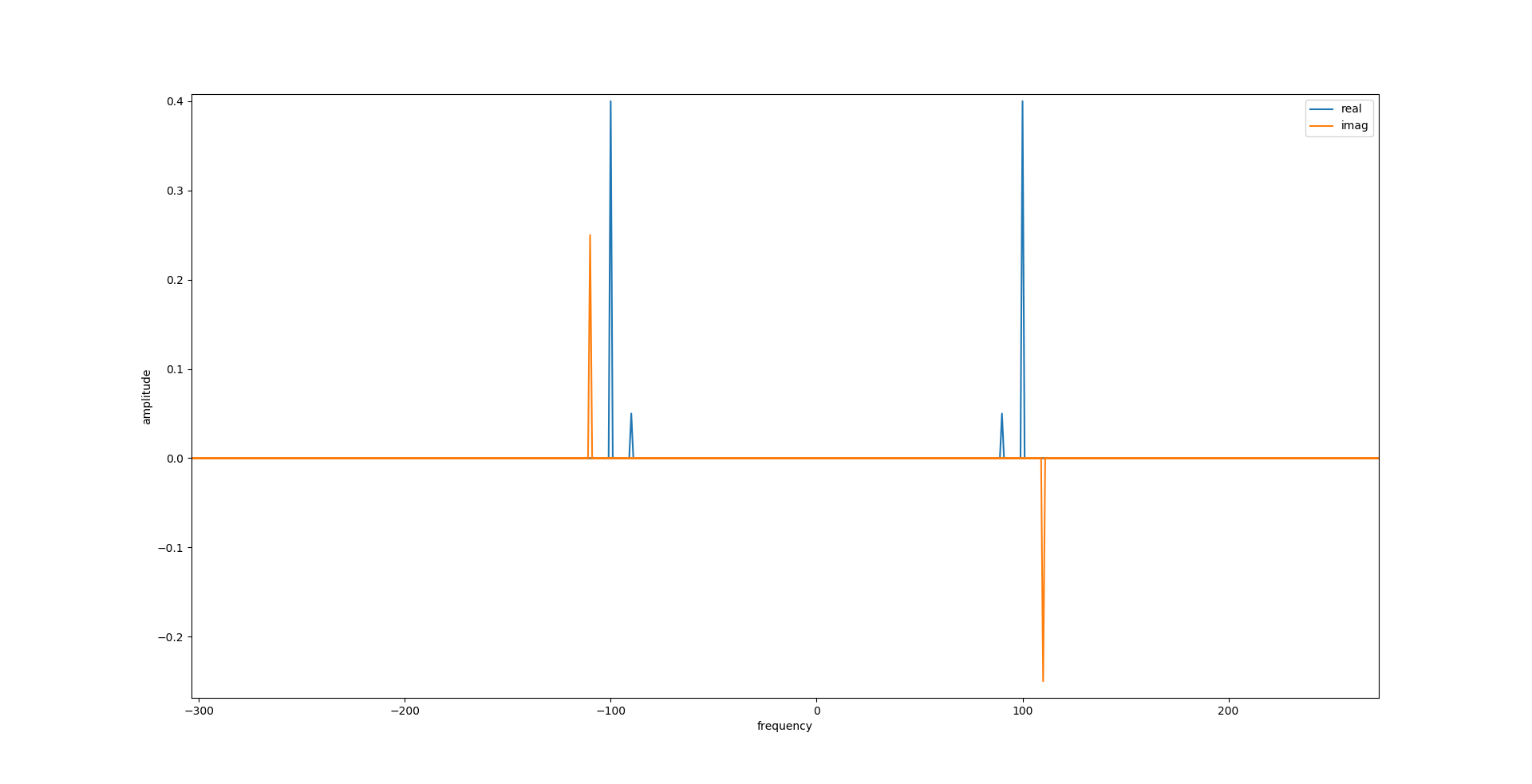 (Blue is the real component of the spectrum and yellow is imaginary).

If I take the inverse fourier transform of these two spectra I get real signals which look like this. 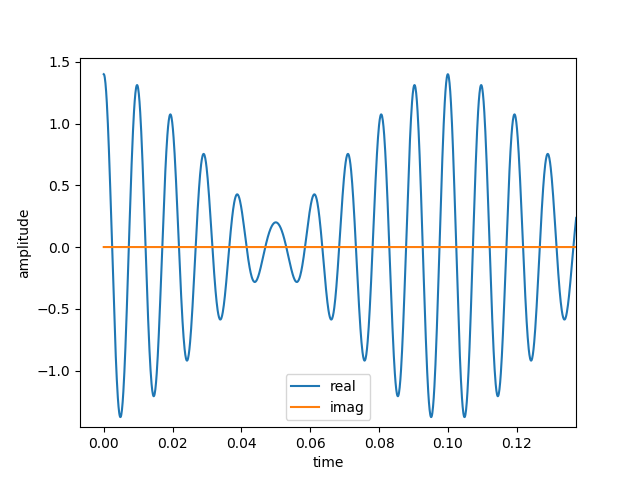 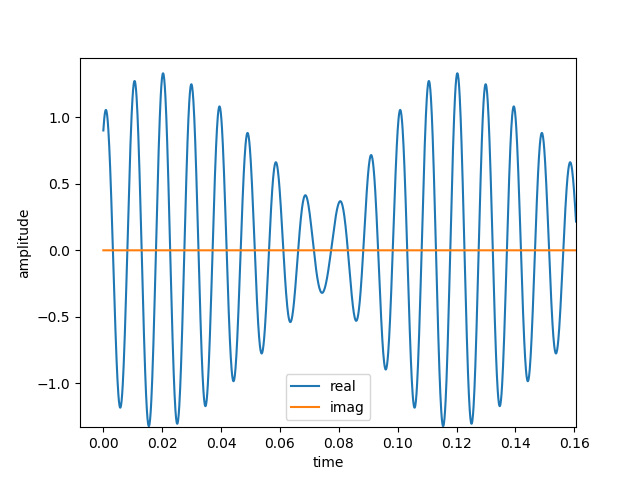 Both of these two signals aren't unphysical, however I don't know how to analyse them in what way I'd need to modulate my carrier to create them. Is it possible to recreate these time signals with Amplitude and phase modulation alone?

Edit: In response to Dan Boschen. This is what my spectrum looked like when I did phase modulation. I am using a large modulation "depth" of 0.5. When I reduce it the harmonic components do become negligible, so I guess in that case I do get just two sidebands.

Mathematically what I'm doing. Where fc is the carrier frequency and fm is the modulating frequency.

My python code to generate that signal: 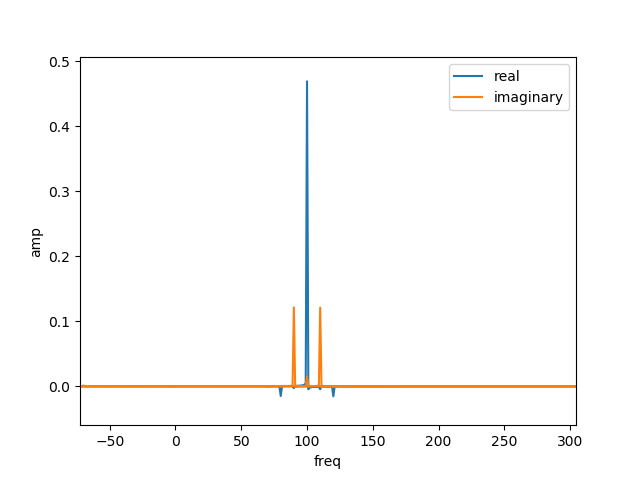 If I understand correctly, you want to use each side band as an independent information-bearing signal. In other words, you want to be able to generate $$a_k e^{2\pi f_i t}$$ with the information in carried by the amplitude $a_k$. There are several ways to do this, but I don't know which are feasible using optical processing. All of the following methods are feasible if you start with discrete signals and then convert them to optical.

I hope this answer points you in some fruitful direction. 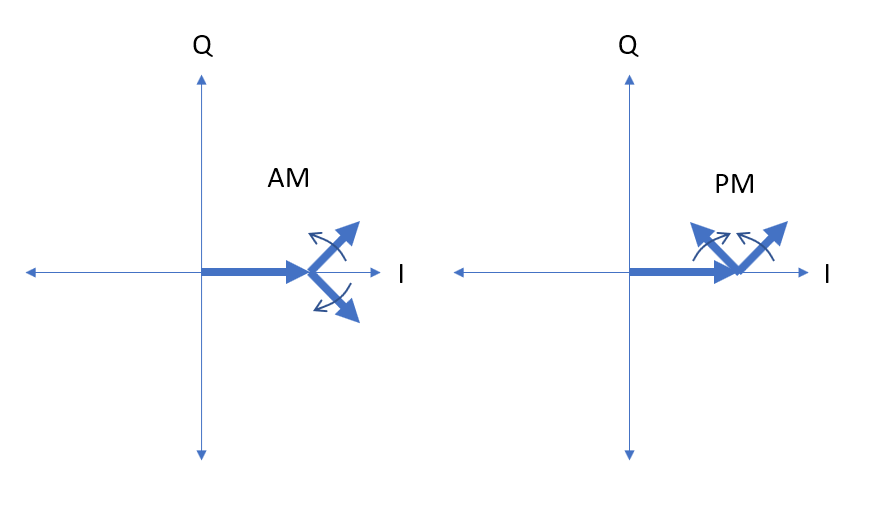 Both diagrams show large carrier AM and PM modulation being modulated by a single sinusoidal tone, resulting in two sidebands in each case. The carrier is represented by a fixed phasor along the real axis, and each sideband is represented by the two rotating phasors which would rotate at the angular rate given by the modulation (the phasor rotating counter-clockwise represents the upper sideband, and the phase rotating clockwise represents the lower sideband, and the relative magnitudes of the phasors to the fixed carrier is the relative magnitude for each of those sidebands).

The net result is the addition of all the phasors shown.

In the case of the AM diagram shown, the two rotating phasors will always have imaginary components equal and opposite, which cancel, resulting in a real vector sinusoidally varying in magnitude that adds to the carrier (thus only the amplitude is modulated).

In the case of the PM diagram shown, the two rotating phasors will always have real components equal and opposite, which cancel, resulting in an imaginary vector sinusoidally varying in magnitude that adds to the carrier. Using the small angle approximation, the ratio of the magnitude of this vector to the fixed carrier vector is the angle in radians.

From this we see how we can control the amplitude of each of these sidebands from coherent AM and PM modulations:

The AM modulation as shown will always have two sidebands for the case of a single tone sinusoidal modulation, as given by:

Where $ke^{j\omega t}$ represents a phasor of magnitude k and angle dependent on time ($\omega t$). Here the carrier is represented as magnitude 1 and each sideband has a magnitude k.

Using Euler's identity this is equivalent to:

Which is completely real, and thus only the amplitude of the signal is changing while the phase remains equal to 0.

The simplification of just having two sidebands for the PM case is only an approximation that holds well for small angles. The PM equation for this case is

For small angles $\phi$, the $\sin(\phi) \approx \theta$ and thus the magnitude as given by the above formula in these cases is approximately 1 and the the phase modulation $\phi(t)$ is equal to $2k\sin\omega t$. For larger angles, the phase modulation is the same but an incidental AM will be introduced if we are limited to having only two sidebands. (Thus in pure PM which must stay on the unit circle meaning no AM, we will see additional sidebands appear as the angles increase which serve the purpose of keeping the net sum of all the phasors involved on the unit circle. The magnitude of each of these sidebands, which occur at multiples of the modulation rate, are given by Bessel Functions of the First Kind).

This is made clearer by observing the next figure where we see the desired PM in addition to incidental AM that will exist if we are limited to just two sidebands. The desired PM is shown as a single phasor which for a sinusoidal modulation resulting in only two sidebands would move vertically up and down in sinusoidal fashion. As it thus moves up and down, the phase will modulate as desired, however due to the restriction of remaining vertical (as constrained by the two sidebands as depicted in the first figure for PM), an incidental AM modulation will also result. This AM will be non-linear and contain many spectral components, initially the second harmonic will be dominant. Because the pure PM (which would result in the phasor staying on unit circle as the phase cycled sinusoidally) also contains many spectral components, the result of the mixed AM annd PM in this case is such that all the higher harmonics cancel, resulting in only two sidebands (and a mixed AM/PM modulation). For small angles (sidebands < -20dB) this effect is negligible, and a two sideband estimate of pure PM can used in most cases (refer to Bessel functions to determine the strength of each sideband; here is a good reference for further reading on that: https://www.zhinst.com/blogs/michele/files/downloads/2012/12/AMFM.pdf?file=downloads/2012/12/AMFM.pdf 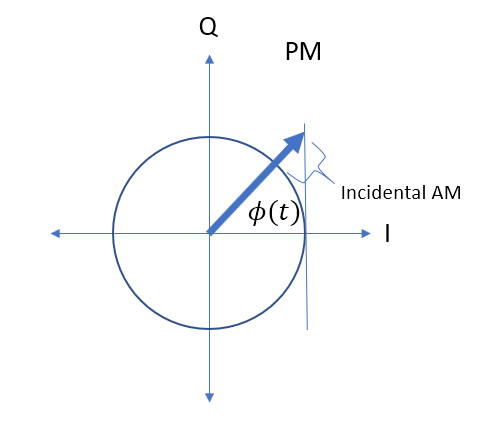 Your biggest difficulty is there could be signals (e.g. if you have just two tones beating against each other with similar magnitudes) that would cause phase instantaneous phase changes of $180^\circ$ -- but these would coincide with $m(t) = 0$.

If your phase change is agile enough -- no problem! If your carrier is strong enough that the sum of the sideband signal never has magnitude greater than the carrier -- no problem!

I can anticipate all sorts of horrible practical problems involving keeping your phase and amplitude modulators synchronized. I suspect that the physical results will always have strange little deviations from ideal -- you'll have to assess just how bad that would be, and how to accommodate the issues.

Not the answer you're looking for? Browse other questions tagged frequency-spectrum amplitude-modulation or ask your own question.

3
Why is a bandpass filtered analog PM signal still PM and not AM
1
FM: Do rational ratios of carrier to modulator signals really produce harmonic spectra?

2
Estimating the wavelength of a sinusoid
2
Analyse audio/music frequencies without STFT, at 1/f temporal resolution, using probe phasors at logarithmically-spaced frequencies, O(N log N)?
0
How to plot Full spectrum with negative frequencies
4
Evaluation of phase difference between two acquired signals (expected to be sine waves) with the same frequency
4
Why is the carrier suppressed by AM-DSB-SC modulation?
3
Why is a bandpass filtered analog PM signal still PM and not AM
4
FFT of a AM modulated signal
3
Creating a PAM function with Matlab
1
Why Does ASK Modulation Create Fourier Sidebands?