I was watching a YouTube tutorial on wavelets https://www.youtube.com/watch?v=wgRgodvU_Ms, where the presenter showed that if we multiply a Gaussian with a sine wave (and follow some other conditions), we get an example of a Morlet wavelet.

A pointer to an introductory reference would be appreciated as well. 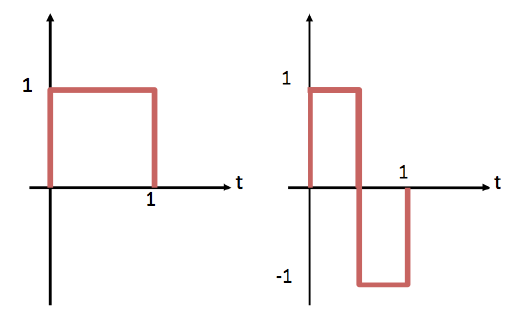 There is a huge gap between the formalism and construction for the continuous wavelet analysis (Mexican hat or Morlet wavelet, the latter being only approximate or complex Gaussian wavelet) and the discrete wavelet transforms (DWT). Let us make a long story short.

Continuous wavelet transforms (CWT) hinge on a continuous wavelet $\psi$, for which for any (nice) function $f(x)$ can be represented as (or analyzed) a weighted ($c_{a,b}$) sum of translates and dilations $\psi\left(\frac{x-b}{a}\right)$. Whether the synthesis formula is equal to $f(x)$ requires $\psi$ to satisfy a moderately mild admissibility condition.

Then a question arose: how can we discretize all of the above to get tractable algorithms? In other words, are there $a_0$ and $b_0$ such that projections onto enumerable series

with $j$ and $k$ integers can still be perfect? The answer is a big yes, provided that $a_0b_0 < C_\psi$, a constant depending on $\psi$ (this is a king of Pauli-Heisenberg-Gabor inequality, result by Ingrid Daubechies, 1984). This becomes a wavelet frame: a redundant set of vectors that exactly recovers signals.

Now, with DWT, we want a base, i.e. a non-redundant frame. Something that keeps the size of the initial data. From the above harmonic analysis techniques, if you choose an admissible wavelet, there is very little chance that a basis could be derived from it. Haar or Frankling bases were known examples, and Yves Meyer in 1985 derived a non-trivial example, the Meyer basis.

To build discrete wavelet bases, it was discovered that a more efficient method was needed. On a discrete space, as a given resolution, you except that there exists an orthogonal basis from an orthogonal template of a translated scaling function or father wavelet. Then, you embedded different resolutions, and you get a 2-scale linear equation linking $\psi(t)$ and $\psi(t/2)$. Using orthogonal projections, you can build another 2-scale linear equation linking a mother wavelet at different dilations. Those equaltions tell you than you can implement the above with convolution and subsampling. Consequently, there are polynomial relations between scale. Solving such nonlinear equations yield a series of weights/linear coefficients providing a hierarchy of discrete wavelets that, plugged into the formalism, are genuine CWT. However, in most cases, they don't have nice close formulae like Gaussians or Morlet. The latter in turn have no discrete counterpart.

In Stéphane Mallat "A wavelet tour", chapter one on sparse representations says:

Continuous versus Discrete and Finite Originally, many signal processing engineers were wondering what is the point of considering wavelets and signals as functions,since all computations are performed over discrete signals with conjugate mirror filters.Why bother with the convergence of infinite convolution cascades if in practice we only compute a finite number of convolutions? Answering these important questions is necessary in order to understand why this book alternates between theorems on continuous time functions and discrete algorithms applied to finite sequences. A short answer would be "simplicity." In L2(R), a wavelet basis is constructed by dilating and translating a single function $\psi$. Several important theorems relate the amplitude of wavelet coefficients to the local regularity of the signal $f$. Dilations are not defined over discrete sequences, and discrete wavelet bases are therefore more complex to describe.The regularity of a discrete sequence is not well defined either, which makes it more difficult to interpret the amplitude of wavelet coefficients. A theory of continuous-time functions gives asymptotic results for discrete sequences with sampling intervals decreasing to zero.This theory is useful because these asymptotic results are precise enough to understand the behavior of discrete algorithms. But continuous time or space models are not sufficient for elaborating discrete signal-processing algorithms.The transition between continuous and discrete signals must be done with great care to maintain important properties such as orthogonality. Restricting the constructions to finite discrete signals adds another layer of complexity because of border problems. How these border issues affect numerical implementations is carefully addressed once the properties of the bases are thoroughly understood.

Not the answer you're looking for? Browse other questions tagged filters frequency-spectrum frequency wavelet or ask your own question.