What is the autocorrelation of a Dirac pulse?

Can you explain to me how to calculate it?

Well, by definition of the $\delta$ distribution, you have:

The autocorrelation of a function $g(t)$ can be computed via:

The first = sign comes from the autocorrelation of the real-valued $\delta$, the second from the definition of the $\delta$-distribution.

Think about it, this does make sense: the only perfect match is achieved with no time shift, ie at $\tau = 0$. All other shifts would end up with one of the arguments of the $\delta$ being different from 0, hence with the $\delta$-function being 0 there.

Looking at documents like Lecture notes on Distributions, Hasse Carlsson, or Convolution dans l'espace $\mathcal{D}'_+(\mathbb{R})$, convolution of distributions can be defined under some technical conditions. However, when one of the operand has a compact support, as $\delta(t)$ does, the convolution is well-defined. From Wikipedia:Distribution-Convolution:

If you prefer classical books, there is: Francois Trèves, Topological Vector Spaces, Distributions and Kernels, 1967: 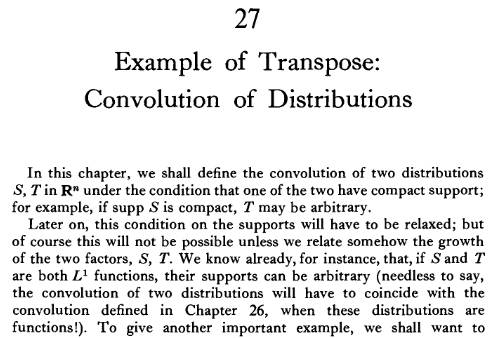 This lazy version avoids to write cumbersome Dirac products under integral signs. Nota: I do admit that I initially thought it was way less simple.

Not the answer you're looking for? Browse other questions tagged signal-analysis continuous-signals autocorrelation pulse or ask your own question.

9
Is the Dirac delta (impulse) signal a power signal or an energy signal?