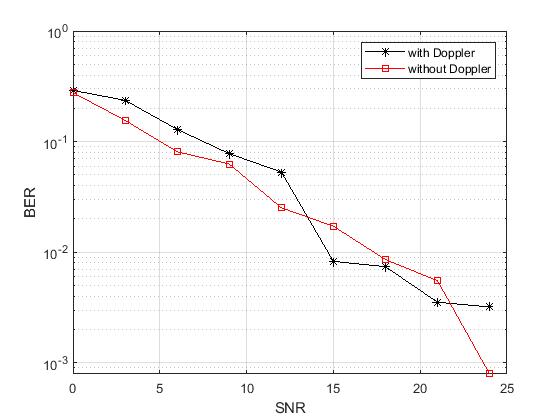 I tried to simulate doppler effect by the following

First of all, I would say you need more simulation points to make the curve smoother. You can't make a definite judgment based on these curves. Can you increase the number of simulation points, and report back?

Of course with Doppler effect, BER should be worse if not handled at the receiver, but if you have a common Doppler scaling factor for all paths, then you can effectively remove this effect completely at the receiver.

For example, in single-carrier systems, the noise-free received signal would be something like

where $s(t)$ is the transmitted signal, then you can re-sample the received signal as rate $\frac{nT_s}{1+a}$, where $T_s$ is the symbol duration, and the systems with Doppler and without Doppler would have the same performance.

However, if each path has its own Doppler scaling factor, then you need to use a receiver structure called multiple resampling, which is a little more complicated, and there will always be a residual effect from the Doppler effect, which is translated into inter-carrier interference in OFDM, and thus requires a second stage of frequency equalization.

Not the answer you're looking for? Browse other questions tagged ofdm snr acoustics doppler or ask your own question.

2
Pulse Doppler Radar: how to filter its Range-Doppler matrix?
0
MATLAB: Adding Noise with Regard to Signal to Noise Ratio (SNR) or EbNo?
0
Channel Shortening for underwater acoustic channel communication
0
Demodulating an oversampled OFDM signal
0
What channel model to choose while simulating a system in passband with frequencies over GHz range?
0
Why is fourier analysis used in doppler effect?