I have a same noise passing through two different ARMA filter. The autospectrum of first filter is given by S11=G1*G1*S_in where S_in is input spectrum created by set of random numbers.

Similarly the autospectrum of second filter is given by S22=G2*G2*S_in where S_in is input spectrum created by same set of random numbers as the previous one.

The cross spectrum that i expect is S12=G1*G2*S_in.But the amplitude is reduced is this due to phase shift of the filter or the derivation above is incorrect.

Attached is an image1 explaining the above statements. 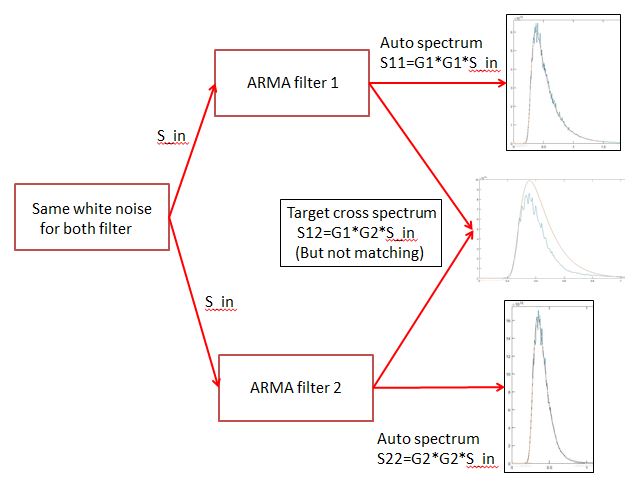 Browse other questions tagged cross-correlation digital-filters or ask your own question.

6
Implementing a Matlab filter to cancel cross talk between two sensors
1
find cross correlation lag by optimization
4
Problems with implementation of a band-stop filter on an MCU (dsPIC) using fixed-point arithmetic
0
Relationship between time average and cross spectrum
1
Cramer Rao Lower Bound for Cross Correlation (Time Shift Estimation)
5
What is the largest “safe” order for the digital Butterworth filter of a given signal?
2
How can I align these two signals? Cross correlation isn't working properly
0
Problem understanding the Expectation Operator
0
What is the physical meaning of the cross-spectrum of two signals measured at two locations and different moment?