Applying a Power on a Sum of Gaussians to Enhance Resolution

There is so-called Power Transform technique in signal processing where the unresolved signal is sharpened by raising each data to a constant positive power. The example shown below is a sum of two Gaussians, $G_1$ and $G_2$ plotted against time. In order to resolve the peaks one can apply a power of 5 to each data point. The result is the resolved pair as shown in the bottom figure.

Where do the peaks corresponding to the other binomial terms go?

The binomial theorem is not necessarily involved: the top waveform is simply pointwise raised to the 5-th power, as others have noted, and there are no missing peaks that should be seen. To illustrate, consider the following crude hand-drawn figure: 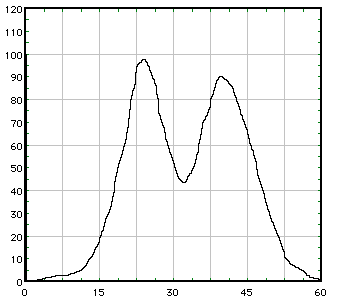 I drew this in my simulation software, so it was automatically "digitized" as I drew it. Obviously, I am poor at freehand drawing with a computer mouse, but I was only trying to make two peaks, with no underlying peak shape in mind.

Then the second figure shows what happens if the digitized values from the first figure are raised to the 5-th power and plotted: 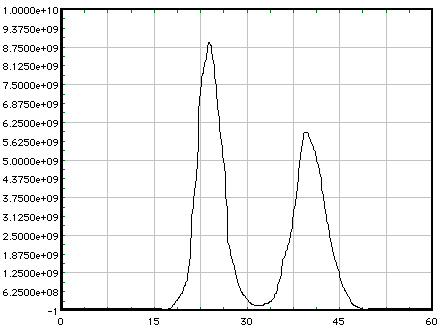 Now taking into account a more recent answer by @MBaz (https://dsp.stackexchange.com/a/60750/41790), there is still one loose end. To see this, consider two Gaussians, $G_1(x)$ and $G_2(x)$, and adding them. Their sum function, i.e., $G_1(x)$ + $G_2(x)$, does not look like either function. Of course, we know the sum function's two constituent summand functions. But the sum function does not show them: it only shows their sum.

then according to the binomial theorem, we should get 6 peaks

Where does that statement come from and why do you think it applies here?

Applying the binomial theorem we get terms that consists of Gaussian raised to different powers. However, when raising the power on a Gaussian, the peak stays where it is so there is no mechanism that would move it someplace else.

You may be confusing this with raising the sum of sine waves to a certain power.

Not the answer you're looking for? Browse other questions tagged discrete-signals signal-analysis gaussian superresolution or ask your own question.

1
Element-wise powering vs. discrete version of binomial theorem on a sum of Gaussians