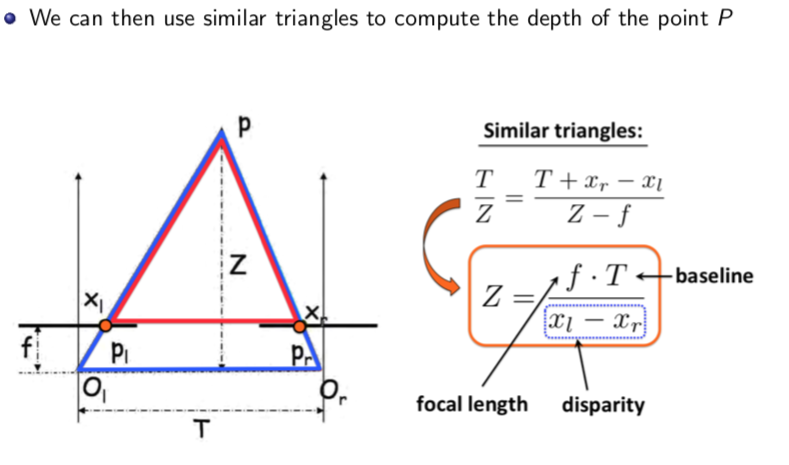 You are computing the base of the red triangle, not the blue one. The blue triangle's base is already indicated as $T$.

Not very clear from the given figure, but as the only consistent answer I could find, assume that the coordinate of the right corner, $P_r$ of the blue triangle $P_l P P_r$ is measured with respect to the second origin $O_r$ indicated in the bottom right, and it seems to be a negative number by definition.

where $T$ is a positive quantity by default, $x_l$ is measured wrtt left point $O_l$ and is positive by default, and $x_r$ will be a negative number as stated above; hence the absolute values can be expanded as

Note that actually you do not have to use absolute values, but just proper adition of the signed quantities would suffice to derive the result. I've used the absolute values to provide some intuition into the signs of the summing coordinates.

Not the answer you're looking for? Browse other questions tagged computer-vision camera stereo-vision or ask your own question.

27
Are Computer Stereo Vision techniques appropriate for sub-millimetre measurements?
12
Interpretation of the eigenvalues of the inverse Hessian in a KLT tracker
26
How to find tennis courts in aerial imagery
5
Function for response over image scales
8
Why do we need 4 points for homography but 7/8 points for fundamental matrix calculation?
0
python: how to compute the gray level histogram features as mentioned in the paper, and
0
Find camera pose by knowing triangle coordinates