How to adjust receiver gains to avoid saturation and quantization noise to optimise post digital processing?

I am using a Hack RF One as SDR and the software GNU Radio to receive and process signals emitted from a drone. Given that the drone is moving and is emitting signals from a wide zone, received signal strengths vary dramatically : if the signal is too large, it over-ranges the ADC input and if the signal is too small, it gets lost in the converter's quantization noise.

For now, my algorithm to manage the different values of gains is the following : Every x seconds, I look at the received digitised signal peak-to-peak value $V_{pp}$ (I take the maximum value V_pp for real or imaginary received signal) and I try to maintain this value into a range such that $V_{pp,lim1} < V_{pp} < V_{pp,lim2}$ , to avoid quantization noise and saturation. To do so, I simply increase or decrease the gain in function of the value $V_{pp}$, starting with IF and BB gains to finish with the amplifying RF gain.

The problem is the following : My algorithm is not optimised. Given that the possible changing steps are not linear and different for every type of gain (14dB for RF, 8dB for IF and 2dB for BB), I sometimes fall into situations where my gains are continuously changing between two situations and do not manage to stabilise even if I keep the distance constant between emitter and receiver.

The question is : how can I manage to have the more constant output amplitude so that my dynamic range is optimised for the ADC?

To avoid quantization or limit cycle oscillations, you can add hysteresis to your AGC decision loop (a form of "debouncing").

This is a great question and comes down to the AGC design and optimizing the available dynamic range on the ADC, given a receiver minimum SNR, sensitivity and interference rejection requirements.

I first need to know or establish these requirements and then usually start a receiver design from the ADC options available within the cost, power and technology constraints. I work from the ADC in deciding what functionality would be analog and what would be digital (as most functionality can be either in terms of the "radio" operation). That said, the ADC must provide as a minimum the the dynamic range the waveform fundamentally requires (SNR required to meet bit error rate requirements for example) and then any excess can be utilized for digital AGC capability, thus simplifying the front-end by allowing for digital filtering of out of band interference or multi-carrier applications with wider dynamic range between channels. This approach would use an analog AGC to set the input signal to the optimum level below full-scale (see chart at bottom of post for that) at the input to the ADC and then provide digital AGC implementation after channel selection or out of band interference (that ended up controlling the pre-ADC signal level) has been removed.

The analog AGC can be stepped with fixed gain amplifiers or attenuators as you are doing, or can be implemented with variable gain attenuators or amplifiers that provide a smooth adjustment of signal level with a control voltage, maintaining a constant level at the ADC input.

Below shows a diagram for the key concepts and considerations in the mixed signal AGC approach with fixed gain steps prior to the ADC, showing the hysteresis to avoid chatter when crossing thresholds that would change the input power. The upper and lower range for the signal varies between the minimum signal level to meet the receiver design objectives under worst case interference conditions ("blockers") and the maximum signal where performance is also still achieved (before degradation due to clipping). 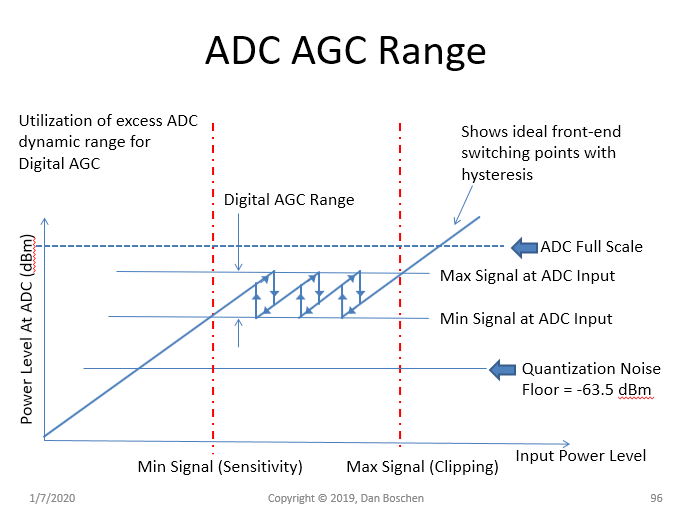 Importantly consider what occurs in a flawed digital AGC implementation with stepped gain front-end control as shown in the diagram below. The AGC as a loop will have a loop BW set to be as fast as possible to correct for amplitude changes without being so fast so as to track out amplitude components of the modulation (for waveforms that have amplitude modulation components such as OFDM prior to demod, QAM, etc). My rule of thumb is using a loop bandwidth anywhere from 1/20th to 1/50th of the symbol rate.

That said, when an AGC controller steps the gain of the analog front-end, following the hysteresis diagram above, the signal at the demodulator will immediately drop, the digital AGC will detect the change in power level and correct the level within the time allowed by the loop BW (again by design it cannot correct too fast or will remove AM modulation signal of importance). 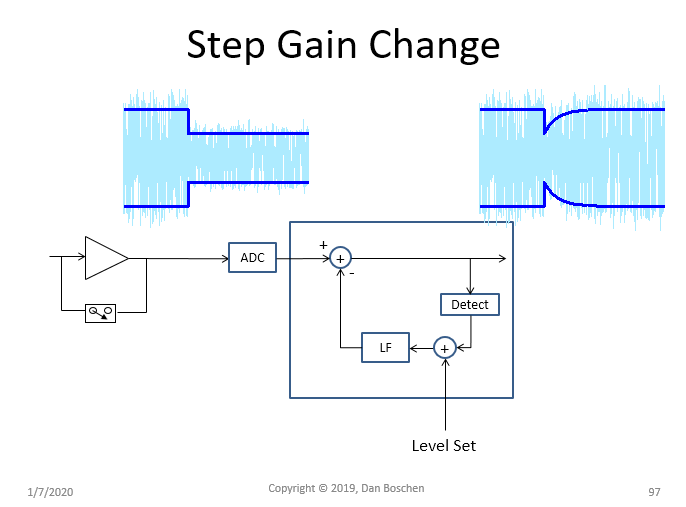 A solution is to add a calibrated compensation in the digital AGC, that when upon controlling the front end gain, a compensatory gain is added post ADC prior to the digital AGC. This will minimize the step to a much shorter glitch (since the time between the two cannot be 0 but can be minimized), resulting in much less disruption to the receiver when changing front-end gain. 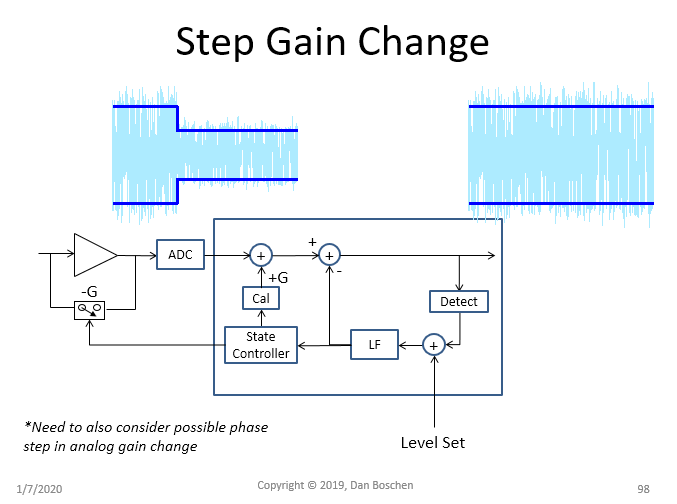 Important to the design considerations mentioned for AGC, both digital and analog, I have developed the following useful curves showing what level to set the AGC below full scale (in this chart, "full scale" is where a single complex IQ tone would clip, so the equivalent clipping for a real sine wave would be -3dB on the horizontal axis).

This is a very useful chart for maximizing the dynamic range with an AGC, and equivalently shows where the rms level of a modulated waveform needs to be digitally in order to minimize the number of bits in the datapath without distorting the signal due to clipping. Specifically this curve shows the optimum operating point for a Gaussian distributed waveform (as are well approximated by most modern modulations) between two distortion sources: quantization noise and clipping.

Two examples of using this chart: At ADC input and at baseband digital modem of the IQ waveform, both assuming Gaussian distributed signals.

Modem input example: We want to know the minimum number of bits required on I and Q for a waveform where we need 20 dB SNR for demodulation to meet design objectives. We could achieve that with a 4 bit data path IF we set the IQ signal level at the modem input to be 8 dB below the full scale IQ radius.

If the rms level of the signal is set too high, excessive clipping noise results; if it set too low, excessive quantization noise results--- or if we have excess dynamic range in the ADC (which we want to simplify the front-end), if we set it too low we lose dynamic range. 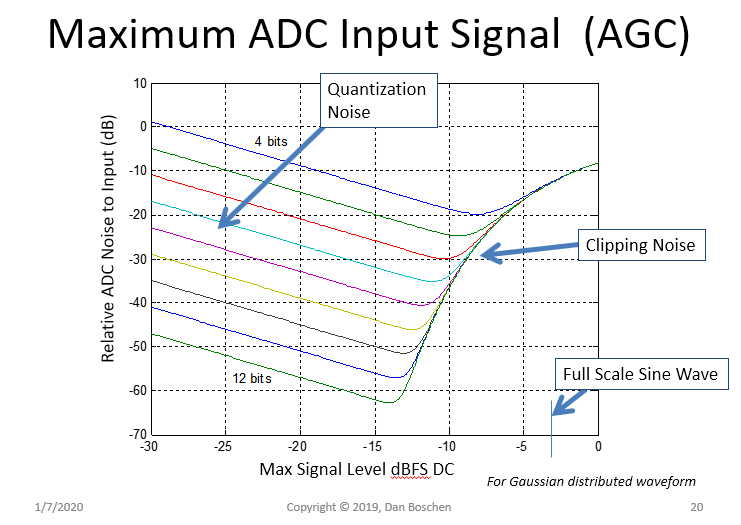 This point is further demonstrated with the following graphic. Many will see the few samples exceeding the range of the ADC and decide that the input signal is too high as clipping is occurring. However, as is clear from the chart above, they may lower the input signal level (set AGC level lower) to eliminate any clipping noise- but they will likely then be past the minimum- in which case more quantization noise is added for a net loss. The ideal operating point will have some amount of clipping, and we win overall by allowing that. 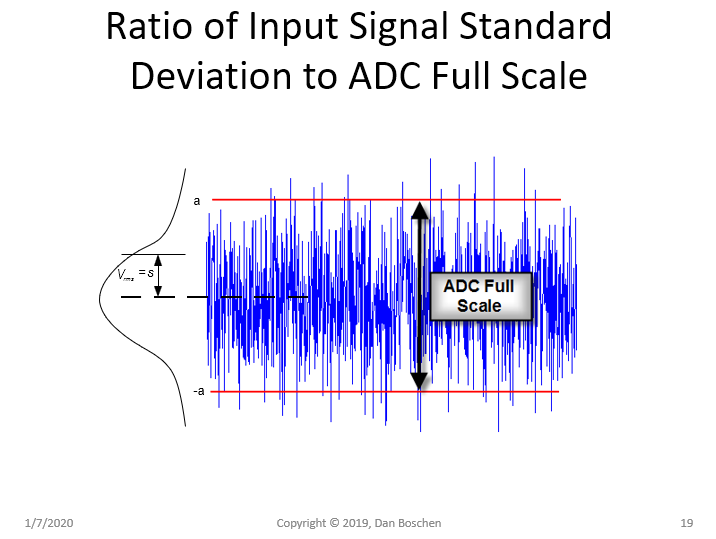 Not the answer you're looking for? Browse other questions tagged gnuradio signal-power analog-to-digital or ask your own question.