How do I explain a complex exponential intuitively?

From a graphical point-of view, it is an infinite spring, whose distance between adjacent coils reflects the frequency of the complex exponential: 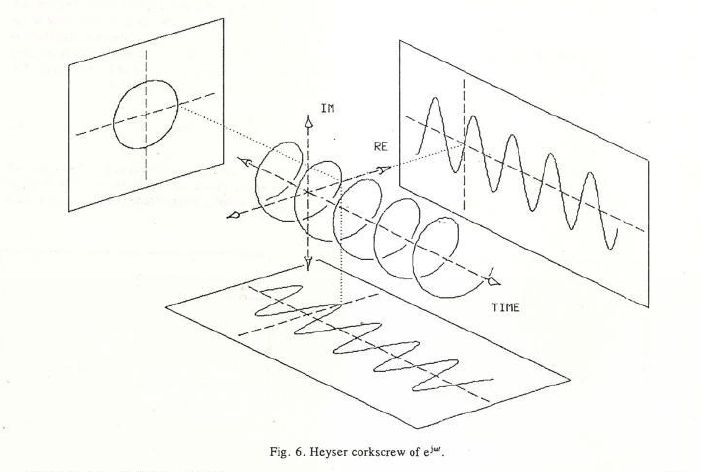 If you have a 1D time x-axis, you may be used to draw functions along a single 2nd y-axis dimension: sines, cosines, etc. If you want to plot a complex function, you need one x-axis, and 2 y-axes for the real and imaginary parts. You can plot this into a 3D visualization, see above, and you see a spring (although it is some hot summer here). Changing the frequency dilates or contracts the spring. It is known as the Heyser corkscrew, or Heyser spiral, in DSP.

A little more details can be found there:

The Fourier transform tells you that any wire (a function) can be reproduced by a superposition of scaled and shifted springs.

After the what, the why. Complex exponentials (or cisoids) are special in that if one is filtered (with a moving average) it keeps the same shape. So, they are invariant, under Linear-Time-Invariant (LTI) systems. Invariant vectors/functions are often an appropriate way to study systems or transformations. Morever, as they form an orthogonal basis, they form a basis of choice to decompose arbitrary vectors, and to study how the latter are affected by LTI systems.

Last, the complex exponential is itself invariant under differentiation ($(e^{z})' = e^{z}$), a specific linear and invariant operator), which makes it quite unique, with interesting properties.

First, they need to understand that complex number has two values: real and imaginary.

Second, they need to understand that the exponential of an imaginary number represents a point on the complex unit circle. This is my intro to it:

The Exponential Nature of the Complex Unit Circle

It does not go above adolescent level math, assuming that means algebra. Except maybe the Taylor series, but those are just icing on the cake.

That explains what a complex exponential is. If there is a real part to it, it just becomes a factor.

An exponential signal can be defined as:

From there it is easy to see that an exponential signal is simply a point traveling around a circle at a constant speed of $r$. Add the third dimension of time to a diagram and it becomes a slinky, umm a spring, technically a helix, just like LD shows.

Pick two random complex numbers, plot them on the plane, multiply them, then plot the product. Verify the rule.

Then say, when you multiply a number by itself, that doubles the angle. Follow that with if you cube it you triple the angle, and so on. Works for fractions and negative numbers too.

Then wrap it up (pun intended) with, if the magnitude of the complex number is one, that is, it lies on the unit circle, then raising it to a power is the same as multiplying its distance along the circumference.

Not the answer you're looking for? Browse other questions tagged discrete-signals fourier-transform audio or ask your own question.