For some sampling-frequency-preserving operations on Nyquist–Shannon sampled signals, such as:

the ideal filter for each task has an infinite number of taps with weights obtained by sampling the sinc function or its derivative. In practice, finite-impulse-response (FIR) approximations are typically used.

For a given maximum acceptable level of approximation error, the required minimum number of taps in the approximating FIR filter is reduced if there is an overhead $f_B\ldots f_s/2$ between the highest frequency $f_B$ of the signal and half the sampling frequency $f_s$. From filter design perspective, this overhead obtained by oversampling the input signal by a factor $\beta = f_s/(2f_B) > 1$ creates a transition band of non-zero width and relaxes requirements on the filter, as exemplified by the magnitude frequency response of a simple approximative derivative filter decipted in Fig. 1. 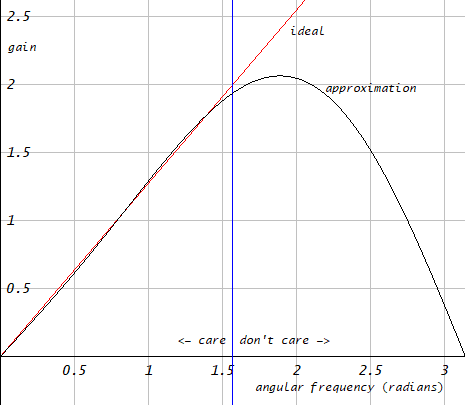 However, assuming that the output signal is sampled at the same sampling frequency $f_s$ as the input signal, increasing $f_s$ increases the number of output samples, which increases the number of times a dot product between the $N$ filter weights and $N$ signal samples needs to be calculated. In general, for a 1-d signal, $\beta N$ times as many multiply–accumulate operations (MACs) are needed compared to the number of samples in critically sampled (not oversampled) representation of the input and output signals.

For such a task, which oversampling factor $\beta$ minimizes $\beta N$, requiring the least total MACs in FIR filtering without exceeding a given maximum acceptable approximation error measured by a reasonable error metric?

Upsampling to obtain the oversampled input signal shall be considered ideal and not contributing to the MAC count, as if the input signal was obtained perfectly pre-oversampled.

With some simplifying assumptions about the signal distribution, a filter with least square frequency response error is the Bayesian minimum mean square error (MMSE) filter for a uniform prior of the frequency spectrum. For such 1-d filters, an oversampling factor $\beta \approx 2\ldots2.5$ seems optimal, as it is in the sweet spot of the cost-benefit curves (Fig. 1). 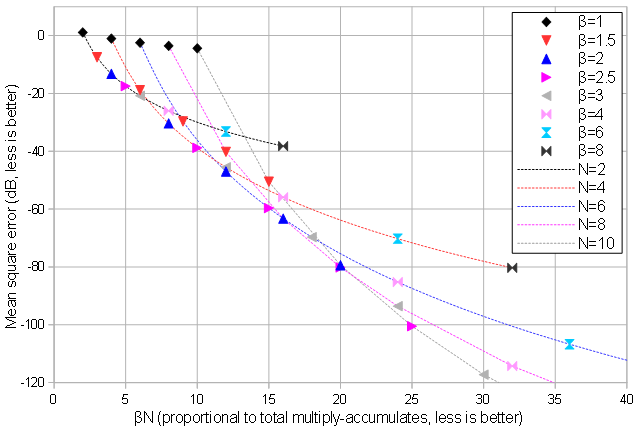 Figure 1. Mean square frequency response error of least square optimal derivative filters as function of computational complexity as measured by $\beta N$ which is proportional to the total number of multiply-accumulates (MACs), for various oversampling factors $\beta$ for which the filters have been optimized. Also shown are traces for different numbers $N$ of non-zero filter coefficients. No advantage was taken from impulse response anti-symmetry or simple coefficients such as $1$.

More data is needed before general conclusions can be drawn.

Not the answer you're looking for? Browse other questions tagged filters interpolation resampling gradient or ask your own question.

3
Derivative filter in Python
0
Compute the time derivative of a noisy digital signal?

7
FIR design : compute coefficients for the same frequency response at another sampling frequency
0
Tradeoff between Filter Order and Sections
2
FIR filter design and implementation - sample rate and number of taps
0
How to design a FIR low pass filter and force a subset of filter coefficients to 0?
5
Efficient implementation of 2-d circularly symmetric low-pass filter
4
Box filter with non integer length
3
What are the advantages and disadvantages of Kalman filter compared with FIR, IIR and low pass filter to filter data with noise?