The SNR calculation method posted as answers were implemented in matlab

The begin_speech and end_speech represent those parts of the wavfile, in number of samples, where there is presence of speech for certain (obtained through audacity by observing the waveform directly)

Why is the SNR less after passing through noise reduction?

In the second method (dspGuru), to calculate SNR after noise reduction, to get the Signal value on the numerator, I have passed just the pure speech through the noise reduction algorithm as well. If I do the same thing in the first (Deve) method, the results of the two methods become almost equal

Why is this happening? Why is SNR after less than SNR_before ?

Here is a screenshot of the waveforms: 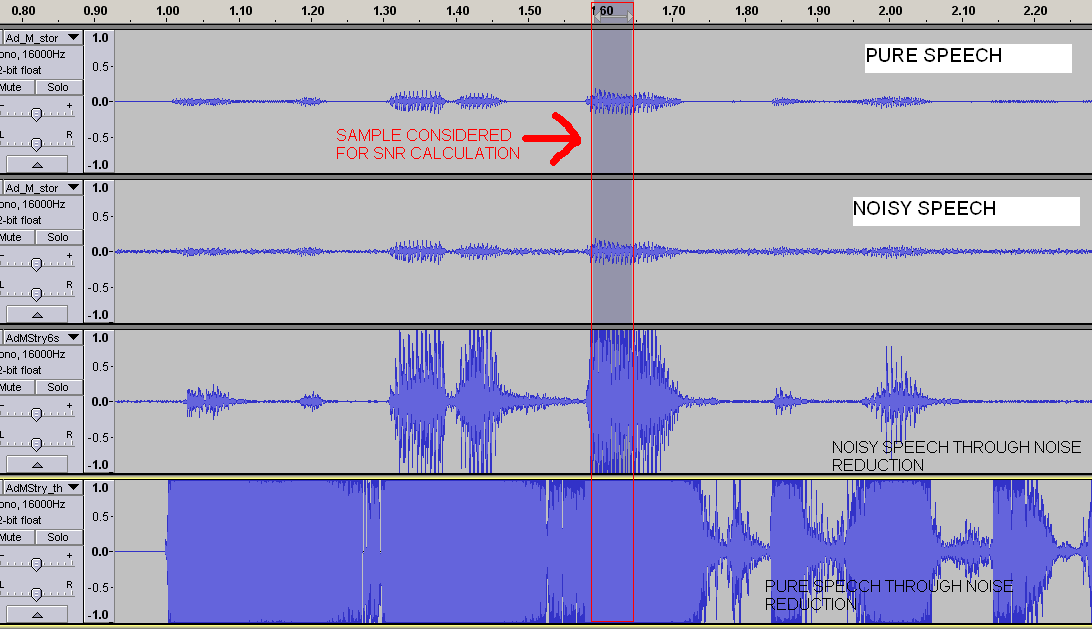 As Jason R has already mentioned in his comment, the noise reduction algorithm obviously introduces some amplification which renders the SNR estimates we proposed in our earlier answers useless. This becomes clear if we look at how the SNR is calculated.

Now the noise reduction (NR) is applied to both signals yielding the pure speech signal after NR $\tilde{y}_k \neq x_k$. Applying NR to the noisy signal produces some new signal $y_k + \tilde{n}_k$. As can be seen from your screenshots $y_k \neq \tilde{y}_k$. If we apply dspGurus method for calculating the SNR after NR we obtain $$ \gamma_{after} = \frac{\sum \tilde{y}_k}{\sum [y_k - \tilde{y}_k + \tilde n_k]^2} $$ The denominator not only conatins the residual noise but also an additional error $y_k - \tilde{y}_k$. This leads to a wrong estimation and a much lower SNR value.

To overcome this problem, you could try to normalize the signals. This will be difficult, because obiously the NR algorithm scales the noisy and the noise free signal differently. If you've implemented the algorithm yourself, you should try to fix this.

How good this estimation is, depends on how good the following prerequisites are fulfilled in your case:

Let's assume that the noise reduction algorithm, $NR()$, is a linear operation. From that follow that:

The SNR of the output can thus be calculated as:

You can verify if your assumptions are correct by listening to this signal:

If the output sounds noise free, then the above SNR calculation is valid.

Not the answer you're looking for? Browse other questions tagged matlab snr or ask your own question.

15
how do I calculate SNR of noisy signal?

15
how do I calculate SNR of noisy signal?
2
Please help me analyse spectrogram
1
why is the spectrogram from matlab different from audacity
5
Power spectral density and SNR for AWGN
3
Understanding “voltage” and “power” in SNR of a sampled signal
0
Calculating the SNR from the power spectrum. Is my suggestion relevant?
0
Calculation of SNR
3
SNR calculation
0
Does receiver always know about the noise level in real world application?