Is there an equivalent of Parseval's theorem for wavelets?

Parseval's theorem can be interpreted as:

... the total energy of a signal can be calculated by summing power-per-sample across time or spectral power across frequency.

For the case of a signal $x(t)$ and its Fourier transform $X(\omega)$, the theorem says:

For the case of discrete wavelet transform (DWT), or wavelet packet decomposition (WPD), we get a 2D array of coefficients along the time and frequency (or scale) axis:

Can a sum of this series somehow be understood as a signal's energy? Is there an equivalent rule to Parseval's theorem?

Yes indeed! In theory as long as the wavelet is orthogonal, the sum of the squares of all the coefficients should be equal to the energy of the signal. In practice, one should be careful that:

You can verify this indirectly, looking at approximation coefficients. At each level, their number of samples is halved, and their amplitudes have around a $1.4$ scale factor, which is just $\sqrt{2}$. This feature is used for instance to estimate the Gaussian noise power from wavelet coefficients:

A little further, there is a notion that generalizes (orthonormal) bases: frames. A set of functions $(\phi_i)_{i\in \mathcal{I}}$ ($\mathcal{I}$ is a finite or infinite index set) is a frame if for all vectors $x$:

with $0<C_\flat,C_\sharp < \infty$. This is a more general Parseval-Plancherel-like result used for general wavelets.

In other words, it "approximately preserves energy" by projection (inner product). If the constants $ C_\flat$ and $C_\sharp $ are equal, the frame is said to be tight. Orthonormal bases are non-redundant sets of vectors with $ C_\flat=C_\sharp = 1 $.

For those using Matlab, you should care about the native border extension, which is obtained by dwtmode('status'). Some add tails to the data to help inversion with little border artifacts. With a periodic mode dwtmode('per') and a number of samples that can be divided by $2^L$ where $L$ is the wavelet level, you can get a good match in energy, with tiny differences: 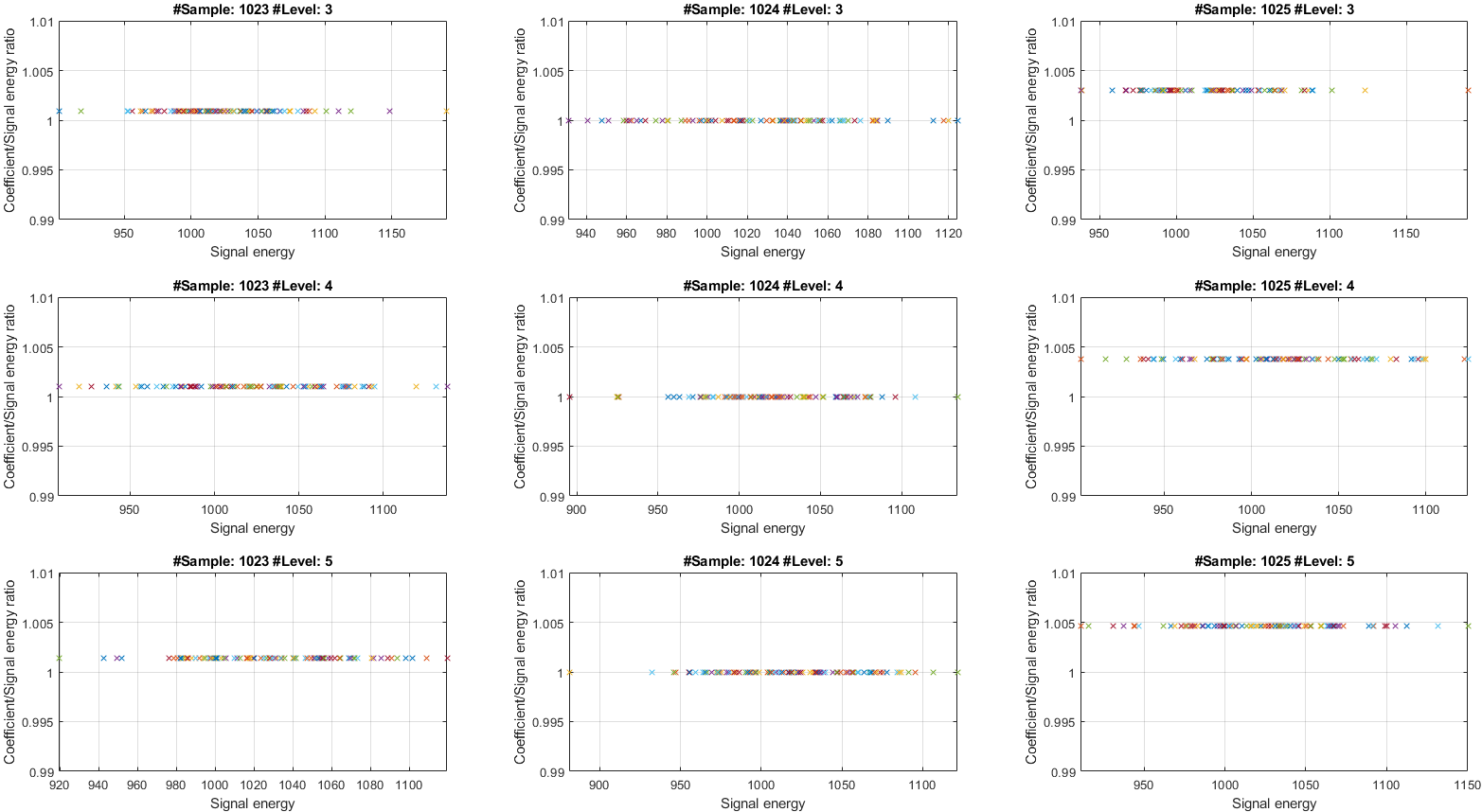 Not the answer you're looking for? Browse other questions tagged wavelet signal-energy dwt parseval or ask your own question.