I'm trying to fit an FIR filter to the measured frequency response (magnitude and phase) of a device. The frequency response is essentially a low-pass filter. I'd like to vary the number of taps to see how many are necessary to appropriately match the response, but also give differing number of precursor and postcursor taps in the design.

I've investigated Matlab's fdesign.arbmag and fdesign.arbmagnphase functions, but these seem to only give designs with the same number of pre- and post-cursor taps.

Here's some sample code with simplified frequency (F) and amplitude (A) values for reference.

The above code runs happily, and produces a low-pass filter that matches the frequency response reasonably well, with tap weights as follows:

There is no reasonable way to explicitly choose the number of taps before and after the peak. The reason is simple: the arbitrary magnitude response design results in a linear phase, and, consequently, the impulse response is symmetrical. If you specify a desired complex frequency response in terms of magnitude and phase, the location of the peak is an outcome of the design process. The smaller the average delay (implicitly specified by the desired phase response), the further to the left the peak will occur. 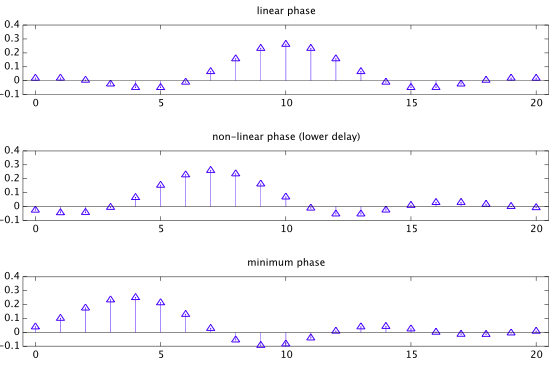 Not the answer you're looking for? Browse other questions tagged matlab filter-design finite-impulse-response or ask your own question.