Are there any command line programs for Windows, preferably free and stand-alone, which can report the peak/strongest frequency within a given range of frequencies? I need something like this to automate finding the frequency of a calibration signal which slowly drifts.

The calibration tone is a pure sine wave. I solved the problem without resorting to FFT - by using the "Sine fitting algorithms" (4-parameter method) described in an annex to IEEE-STD-1057/1241.

The Goertzel algorithm is more efficient than the DFT for a small number of frequency bins and can be easily implemented in open source software such as Octave or Python.

More info is available on Wikipedia https://en.wikipedia.org/wiki/Goertzel_algorithm including the handy rule of thumb as to when it is more efficient:

For estimation of a single tone in low SNR conditions see this paper by Rim Elasmi_Ksibi, Hichem Bessbes, Roberto Lopez-Lacarace and Sofiane Cherife: https://www.researchgate.net/publication/220228033_Frequency_estimation_of_real-valued_single-tone_in_colored_noise_using_multiple_autocorrelation_lags which extracts the estimate for $cos(\omega_0)$ from the samples of the autocorrelation, where $\omega_0 \in [0, \pi] $. Which derives the estimate for $\omega_0$ as:

Where $\hat{r}_k$ is the unbiased autocorrelation for the observed samples y given as:

Intuitive Explanation of Autocorrelation As a Frequency Discriminator

The above gives the actual frequency estimate with all scaling accounted for, and you can trade the computational complexity with the noise of the estimate approaching the CRLB as detailed in the referenced paper. What follows is to provide and intuitive understanding of how this works. This works on the simple principle that the product of a sinusoid and a phase shifted version of the same sinusoid is scaled by the cosine of the phase as given by the following trigonometric identity:

So when the frequency is the same and only the phase is different, the product is:

If we average (low pass filter) the above, the $cos(2\omega t+ \phi)$ term goes to zero and we are left with $\cos(\phi)$. This shows how the product is a phase detector. When we delay and multiply (as done in the autocorrelation!), the delay produces a signal with the same frequency but a phase shift. The resulting phase measured by the phase detector (product) is the change in phase over that delay which by definition is frequency! (Frequency is the derivative of phase). 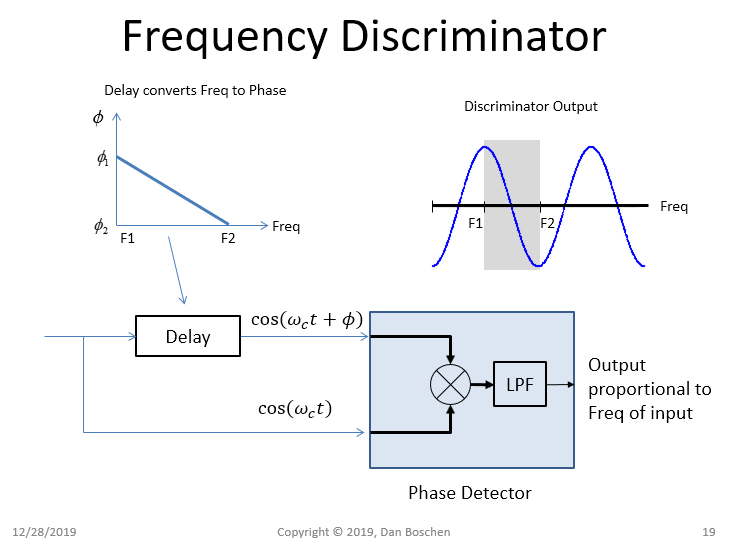 Each sample of the Autocorrelation Function is a delay and multiply with a different delay value for each. The above referenced paper is simply scaling each result back to be $cos(\omega)$ and averaging to minimize the noise contribution and improve the estimate. In the plot below the vertical axis is crossing the horizontal axis at $-\pi/2$ to be at the point of maximum slope (operating point when used as a discriminator): 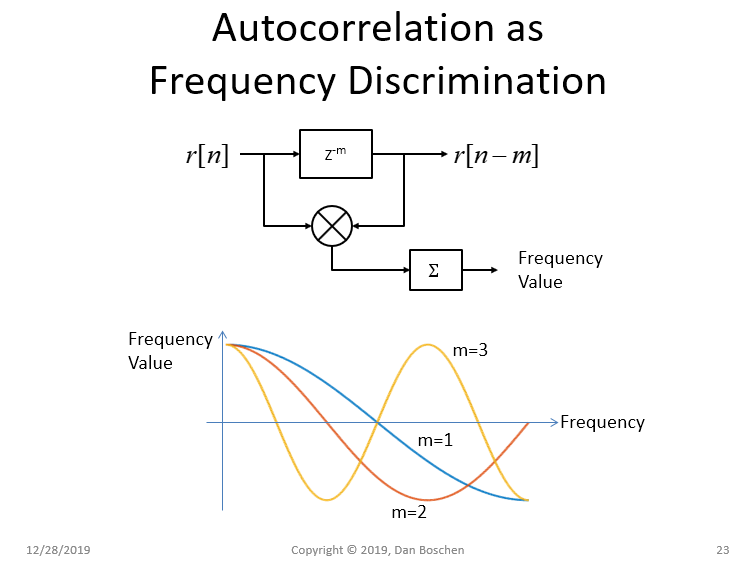 This all applies to complex signals as well, in which case a complex conjugate multiply is done as shown with phase detector topologies below comparing real signals to complex signals. This suggests for a single complex tone the use of either the real or imaginary output of the complex conjugate multiplication to get a similar $cos(\omega_0)$ (real out, I) or $sin(\omega_0)$ (imag our, Q) result but with further processing a direct result of $\omega_0$ is obtained using:

Where atan2 is the 2-argument arctangent with I and Q are the real and imaginary results of the complex conjugate multiplication, suggesting how the referenced approach for a single real sinusoid can also be extended to the case for a single complex tone.

And for a single complex tone in high SNR conditions the estimate is trivial since the normalized angular frequency is the phase change from one complex sample to next, which is readily extracted from complex conjugate multiplication of the two samples:

(And there are numerous efficient estimators for the atan2 process that can be used to further simplify this, including the iterative CORDIC rotator when cycle times to iterate are more available than multipliers and look up tables.) 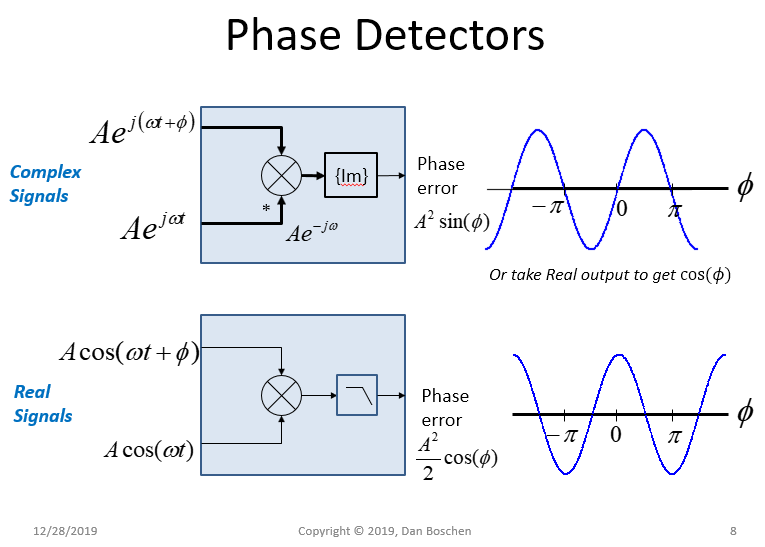 What is useful and interesting from this is the imaginary portion of the autocorrelation function for any waveform will be proportional to the frequency offset of that waveform, which is useful for carrier recovery implementations for radio receivers! This is demonstrated below in the result for autocorrelation of a complex additive white Gaussian noise signal with a frequency offset in one direction ($e^{j\omega_o t}$) as plotted on a complex plane showing the real and imaginary terms of the autocorrelation. 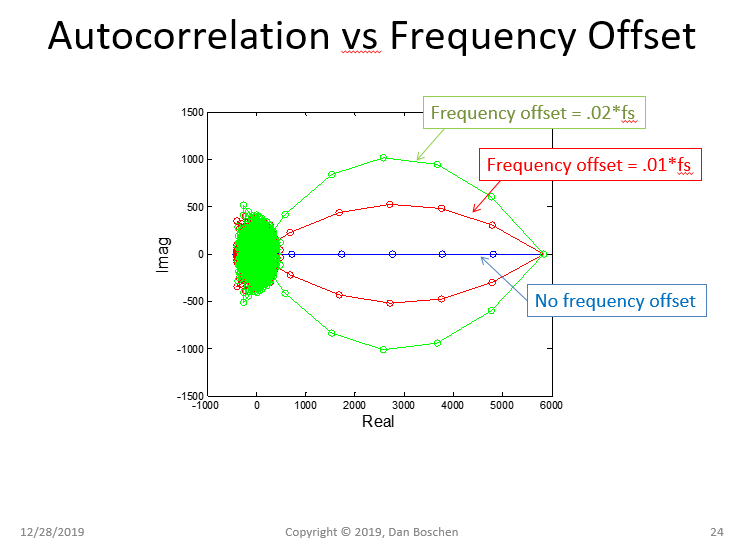 If you have a high SNR signal and can bookend your signal with two DFT bins, I don't think you can do better than https://www.dsprelated.com/showarticle/1095.php with an implementation shown in https://www.dsprelated.com/showarticle/1284.php if accuracy is important. For a noiseless, non-integer frequency (cycles per frame), the formula works with any two bins, as it is mathematically exact. For frequencies near the middle between two bins, it is the most robust by my testing.

Here is the graphic comparison which is sparking my curiosity: 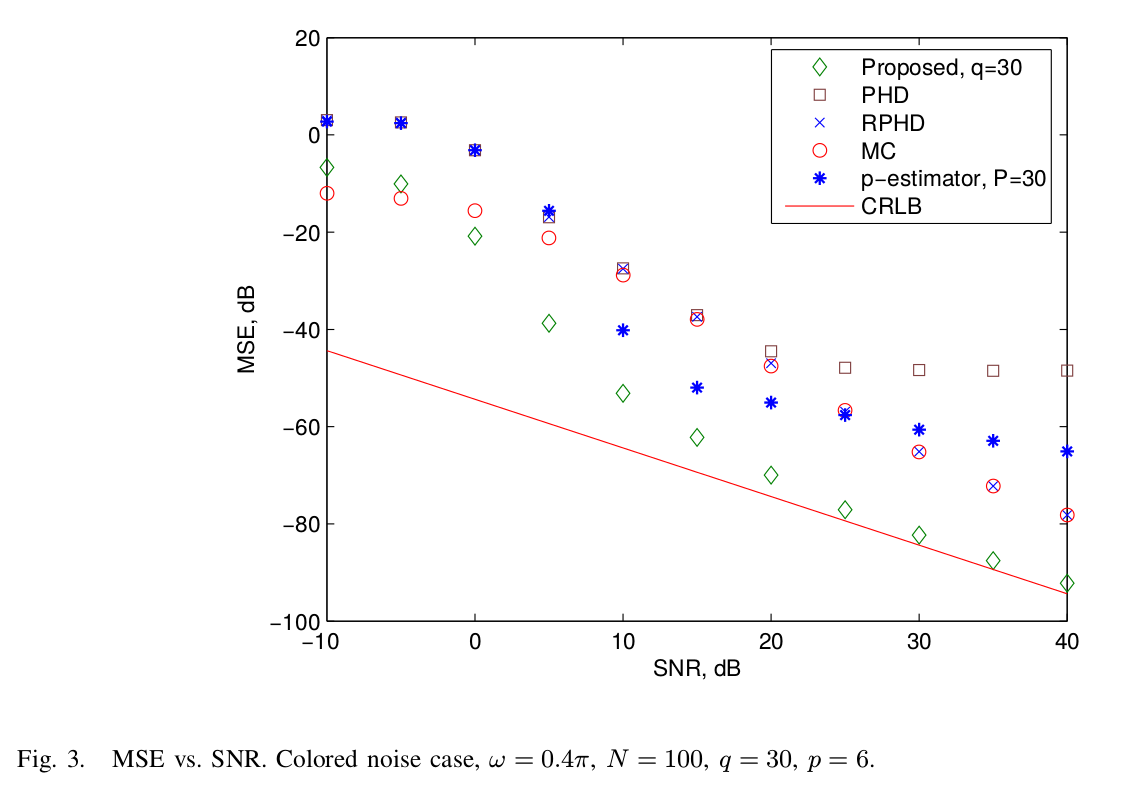 This shows the autocorrelation formula's results. 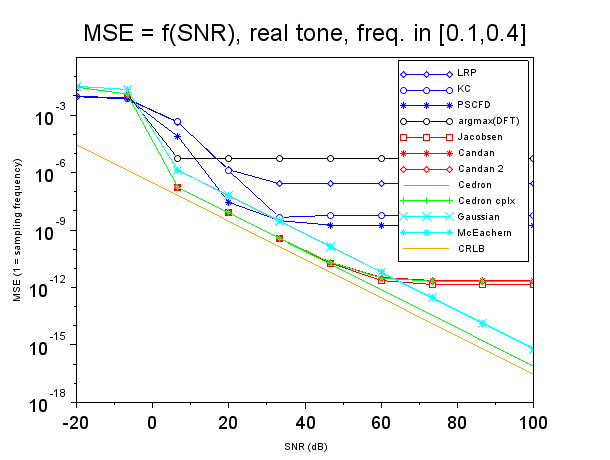 There is a full write up available as a PDF in the upper right corner under the link "Resources: Comparison of different frequency estimation algorithms (pdf)"

This shows the comparisons of several formulas. Notice that the green line, which is my original 3-bin real valued formula, is the only one that hugs the line into the high SNR territory. (It is exact in the noiseless case, first of its kind.)

What is more interesting though, is that it also seems to do better in the low SNR range. This may not be a valid comparison based on noise type, not sure.

Not the answer you're looking for? Browse other questions tagged fft reference-implementation or ask your own question.