I've got a fun problem and would be curious to get feedback on how some of you would go about solving this.

Imagine I have a probe and am scanning the surface of some material. This material surface is described by a perfect cosine signal. If my probe is perfectly normal to the surface, my probe will output a "1 to 1" match of the surface signal (excluding some DC offset).

However, if my probe is not perfectly normal to the surface, the collected signal would appear to be a skewed sinusoid. I've put together a simple diagram of set up. 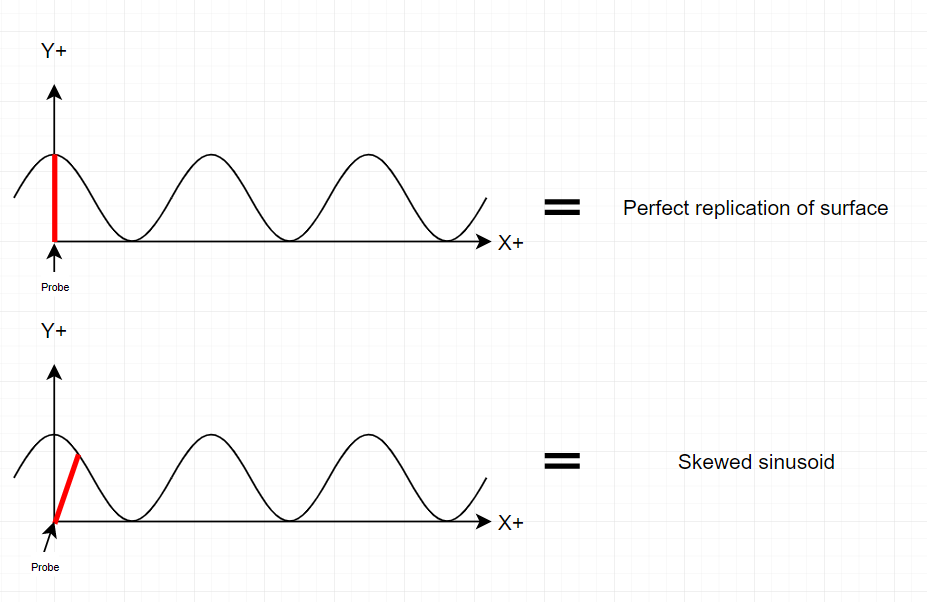 Currently, my method for determining the probe angle would be to determine the frequency content of the signal. In the case of the probe being perfectly normal to the surface, I would expect that frequency domain would show a single impulse corresponding to the surface frequency.

In the case of the angled probe, I would expect to a find a range of frequencies. Obviously the peak would still correspond to the dominant spatial frequency, however, there would now be a certain bandwidth associated the frequency domain. This bandwidth is associated with the fact that the collect signal is a skew sinusoid.

Furthermore, if anyone else could see a way of determining probe angle that isn't frequency domain related, I would be interested in hearing it.

Edit: As I think about this problem more, I'm becoming less confident in whether or not probe angle would create a skewed sinusoid. Assuming the angle doesn't exceed the max slope found in the signal, I'm starting to think the resulting signal would simply be a phased offset sinusoid...

By Eq. 2 the period starts at $(0, 0)$ and ends at $(2\pi, 0)$, which makes the corresponding period of the skewed sinusoid also start and end at these points. We obtain the waveform by solving $y$ as function of $x_0$ from the system of Eqs. 1 and 2. Unfortunately there is no closed form solution, but we can still make some plots:

Figure 1. The skewed waveform for different values of the constant $k$. At $k=\infty$, the waveform is equal to the constant-biased sinusoid. The waveform shown represents the probe tip $y$ position as function of the coordinate $x_0$ at which the probe shaft crosses the $y$ axis. If you desire the "probe length" waveform, you need to multiply this waveform by a factor $\tfrac{\sqrt{k^2 + 1}}{k}$.

I doubt that you will be able to find an analytical solution in frequency domain. What we can do is determine $k$ based on the waveform peak location $x_0 = x_p$ by setting $y = 2$, for which the system of Eqs. 1 and 2 gives:

To get the angle $\phi$ by which the probe angle deviates (moderately) from the normal of the large-scale surface:

Not the answer you're looking for? Browse other questions tagged fft dtft or ask your own question.

21
What effect does a delay in the time domain have in the frequency domain?
6
Determining the mean of of a sampled signal (improvements to time averaging method)
2
Technique of sampling a high-frequency signal (Mhz) with a lower sampling rate (khz)?
5
Problems Using FFT to Compute Impedance in a Model Neuron
0
Recovering a DSSS signal with poor clock synchronization
2
FFT showing peaks at 0Hz?
3
DTFT of sine wave using freqz