Why only odd harmonics after non-linear amplification?

Why do I get only odd harmonics appearing? This not only happens at saturation of the transfer curve, but also in the linear portion of the curve.

This is basically how I do it

This makes the output signal complex array so I take the absolute value and for parts that should be negative, I multiply that location on by -1 by finding the correct location on input signal.

I cant upload my code... but you get the idea of what I am doing right?

Now this is my output and no matter what my input level on my signal is i.e. whether I am in the non-linear part or linear part, I always get odd harmonics. I've also tried a different transfer curve. Only get odd again. 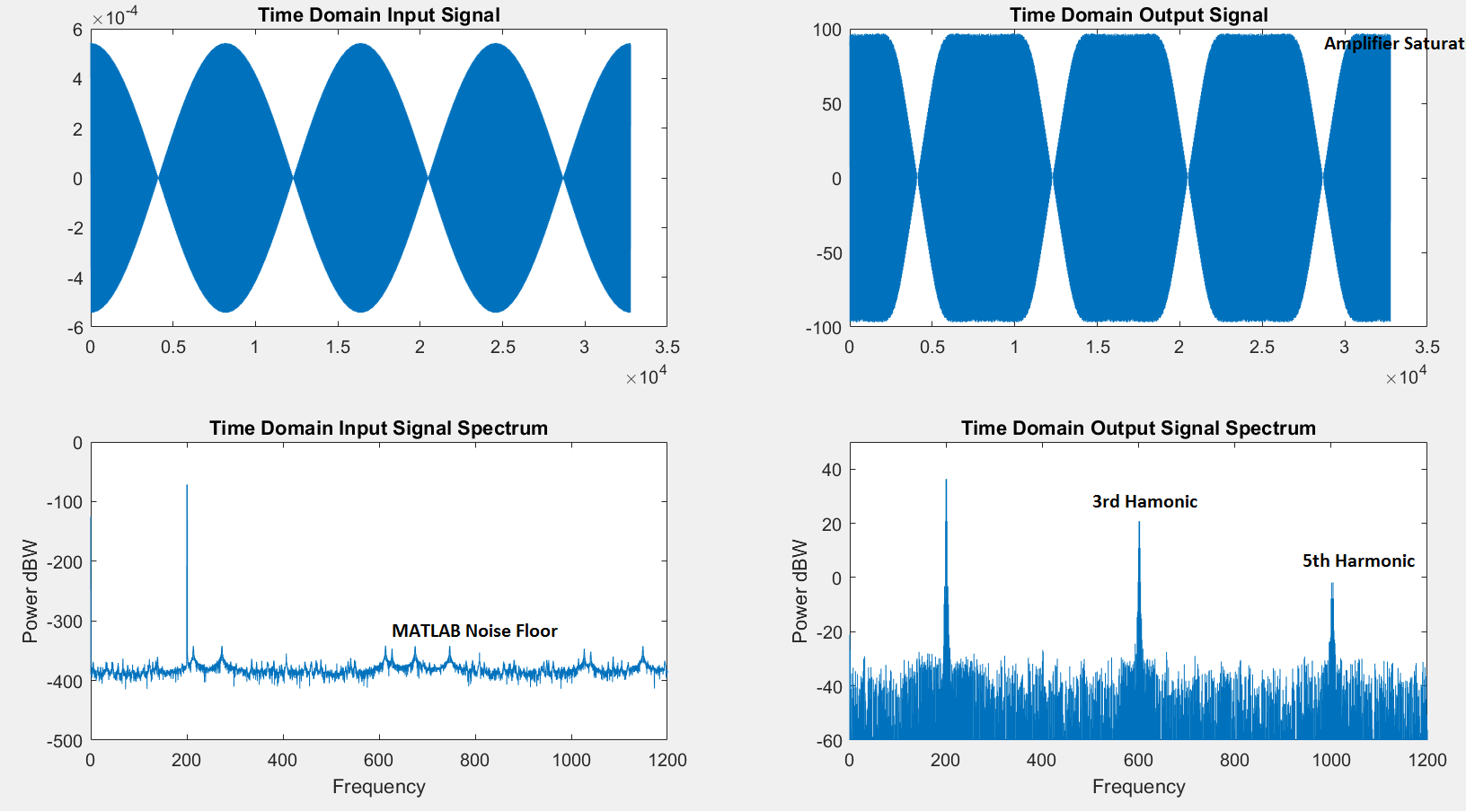 digital-communications modulation non-linear
Share
Improve this question
edited May 23 '19 at 15:13

An ideal amplifier would have a transfer characteristic of $f(x)=Ax$: the input signal comes out amplified and otherwise undistorted. A real amplifier will deviate from this and go into saturation. We could model it by a polynomial $f(x) = \sum_{n} a_n x^n$. Now, what we would still expect is that the amplifier treats positive and negative values the same way, i.e., it is symmetric in the sense that $f(-x) = f(x)$. This leads to the requirement $a_n = 0$ for all even $n$.

Now, one can show that raising a sinusoidal with frequency $f_0$ to the $n$-th power generates harmonics up to order $n$, however, preserving their oddity:

and so on. It's a consequence of the binomial theorem and quite easy to show (see, e.g., here).

In short: A transfer function that is odd symmetric will generate only odd harmonics. This is why you are seeing only those.

I don't completely understand what you're doing with the lookup part, but if you're multiplying this transfer function in the time domain, then I think it makes sense that you're adding harmonics. If you look at the frequency response of a triangular wave (https://en.wikipedia.org/wiki/Triangle_wave), it is made up of decaying odd harmonics, so even if x(t) were constant, I'd expect you'd still see the harmonics. If you set x(t) to a constant, you could see what the frequency response of the transfer function itself is. I believe applying a triangular window function (https://en.wikipedia.org/wiki/Window_function#Triangular_window) would have a similar effect.

Your question is a bit confusing (see my comment), but I'll mention here some general properties of non-linear systems that might be relevant.

If the input is an AM signal, then you get even more complicated interactions. However, you can derive them all from the power-series model above, with a bit of algebra and trigonometry.

Not the answer you're looking for? Browse other questions tagged digital-communications modulation non-linear or ask your own question.

3
Envelope following using FFT bin power -> Low pass effect on the modulation transfer function
5
QPSK Modulation/Demodulation in C++
1
Is it possible to use a Volterra series to generate subharmonics?
0
How can I describe a sum of sinusoids by an equivalent lowpass signal?
1
What is meant by "Cubic Difference Frequency"?
4
Power Spectral Density of Digital Modulations
1
Why would amplitude modulation result in change of frequency?
1
Impulse response $h[n]$ of a non linear I/O equation
0
Implementing triangular modulation in Matlab