What does a fractional frequency (for discrete-time signals) mean/how to interpret it? [closed]

This question has bugged me for a while as it's not addressed in any books I've read. I was wondering how folks from this community interpreted it. Below are my personal notes on the matter (please excuse the formal tone).

In the context of signal sampling, one cycle of an event represents a single, complete, sampling (measurement) of a value of a quantity. The interpretation of (positive) integer sampling rates is intuitive: fs = 5 Hz means 5 samples are taken every second. But how to do we interpret fractional sampling rates (e.g., fs = 1/3 = .333... Hz)?

Though we can conceive of sampling as an operation that occurs instantaneously in the abstract, we must realize that all system takes some non-zero amount of time to acquire a value of a quantity (a delay that manifests as a physical limitation of the measurement procedure or is introduced by hardware that carries out the analog sampling).

So it becomes conceivable that a unit of time (one second) might not be enough time for a single sample of a quantity to be available (or perhaps only one-third of the sample is available every second). We can interpret fractional frequency as an incomplete sample per unit time or the fraction of a sample that is available per unit time.

Another equivalent (perhaps more sensible) way to interpret a fractional sampling frequency is to interpret its mathematical inverse, the sampling period, which is the number of seconds required for a single, complete measurement of a value of a quantity.

Edit: Not sure why I was downvoted. I think this is a legitimate question. Please specify how I can improve the question.

So a sampling frequency of $5$ Hz (which you consider as 5 integral samples per second) can also be understood as a uniform sampling with a sampling period of $T = 1/5 = 0.2$ seconds. Which means that every other sample is $0.2$ second apart.

Since time is a continuous quantity, then you won't fall into the trap of asking whether there are integral samples or not.

Of course you can equally interpret is as you did before: you will be taking $5.1$ samples per one second. But that's counter untuitive to your integral sample concept, then be aware that it doesn't mean that there is a fractional sample rather it actually means that in one second you take $5$ net samples and spend $0.1$ sampling time empty (and wait a little more to get the next (6th) sample). So actually $5$ samples would take $5 \times 0.1961 = 0.9804$ seconds (slightly less than a second). But if you perform a sampling of 10 seconds, then you would get $51$ integral samples...

And from this last thing you would deduce that $51$ samples in $10$ seconds makes a sampling rate of $5.1$ samples per second. But no, there is no fractional sample. 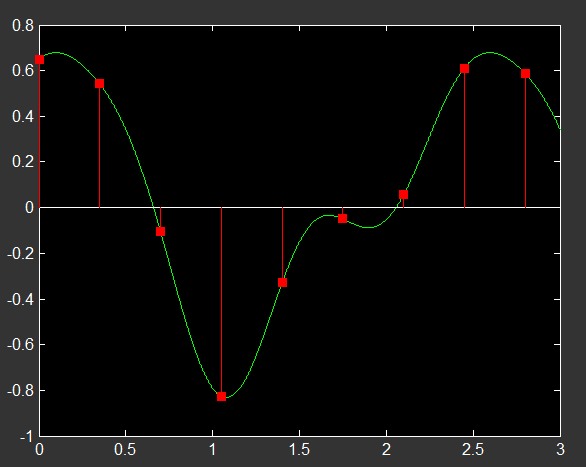 In this figure, the continuous curve represents the continuous-time signal $x(t)$ and the red squares represents samples of it at a rate of $F_s = 2.8571$ samples per second, or equivalently a period of $0.35$ seconds between two samples. So when asked to compute the rate of samples you would use the conventional formula for (time) rate of anything:

samples per one second. Note again that according to this rate of $2.8571$ samples per second, during a 1 second interval expect about $ \lfloor 2.8571 \rfloor + 1 = 3 $ complete samples to be included. And there's some empty time left after the third sample, and that's where the illusion of a $0.8571$ fractional sample appears... of course there's no fractional sample and the next sample will be at time $t= 1.05$ seconds (outisde of the first second interval).

Not the answer you're looking for? Browse other questions tagged sampling frequency or ask your own question.

24
What mathematical model of audio can make possible pitch shifting of individual notes in (timbrally complex) polyphony?
0
Time Period of one Cycle is way too large
1
Fractional Frequency and negative Frequencies
4
What does “frequency” mean for various kinds of signals?
6
Determining the mean of of a sampled signal (improvements to time averaging method)
1
Octave error - STFT parameters when detecting pitch in guitar audio signals
0
Is it possible to do deconvolution with two data sets that have different sampling rates?
0
IQ Sampling and Oversampling Differences? *Confused*
2
Contradictory results from power spectral densities and autocorrelation in shot noise